Chapter 21: Worrier in the Twilight[edit] 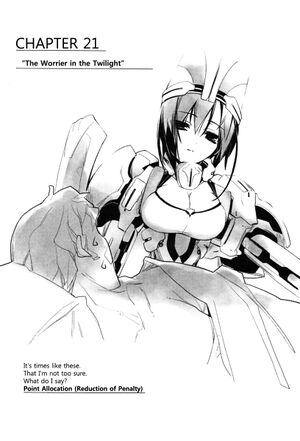 That I’m not too sure

What do I say?

Thin beds, all surrounded by white curtains, were lined up under the white light of holy-technique illumination. This was a hospital room.

A young man was sleeping on one of the beds; a girl sat by the bedside.

The girl was tending to one of the young man’s legs with her two prosthetic arms.

The skin of the leg was covered by parchments of holy-technique contracts to such an extent that it looked like papier-mâché, and the girl continued to plaster charms onto it. However, the charms were gradually falling away from where they had been applied, crumbling with a glow of light and revealing the skin beneath.

Beneath the charms was deep purple skin, swollen and bloated, like it had absorbed a large amount of water. The thickness of the right leg was almost several times that of the left one.

“…Master Muneshige, why do you not think of an easier way to win? You always fight the enemy head-on.”

The girl whispered to herself. She took a new holy-technique charm from the box labeled, “Medical Officers’ Property,” and applied it to his leg while saying:

“If this continues, I will never cease to worry. It is already dawn, but you…”

She took a breath, her head bowing slightly.

The moment the words left her lips.

Surprised at this sudden voice, the girl, Gin, turned back; and Muneshige’s eyes were open.

His eyes were wet and slightly bloodshot, but they were focused on her.

“Have your worries ceased?”

Muneshige said with a weak smile. Hearing this, Gin’s face flushed a deep pink, and she dipped her head.

She took Muneshige’s swollen right leg and squeezed it.

Muneshige flailed about like a fish out of water, but Gin’s left arm and the leg in its grip budged not an inch.

Muneshige tapped out on the bed, but Gin remained standing there, taking deep breaths and forcing down the heat rising to her cheeks. She looked at him from the side.

“I suppose you have something to say…? Alright, start (empieza).”

“I-I’m sorry for worrying you, so sorry!”

“T-thank you very much f-for treating me!”

“S-sorry for embarrassing you with my playfulness!”

“Tes. Anything else?” She added.

As Muneshige squirmed, noise started to spill in from the curtain behind Gin. It was the sound of many voices.

“Vice Squad Leader! Have you woken up!?”

After a few seconds, the sound of footsteps walking away from the door and men and women muttering drifted into the room.

“The hell was that about, even though we were worrying so much the vice squad leader’s having the time of his life.”

“Jeez, the vice squad leader’s always making Gin-san do things like that… Thinking about Muneshige being a catcher gives me shivers…”

“Well, they say that all humans have a weakness…”

Adding on her right hand, Gin nodded twice, then thrice.

“So basically, this is what is commonly referred to as ‘the time of one’s life’.”

“Tes. Shall I increase my strength output?”

Hearing this, Muneshige sat up.

Holding his breath, he suddenly pushed himself up and leaned against the sitting Gin, hugging her close to him.

“U-um, I forgot to say something.”

“Tes. Welcome back. I was waiting for you to say that.”

Gin smiled and hugged Muneshige back, wrapping her right arm around him. She brought her left arm away from his leg, saying:

“I have no complaints if you go to the no man’s land, but if you did not come back then I would be…troubled. Replacing Master Muneshige may be a simple task for others, but it is not the same for me.”

Gin embraced Muneshige again, a breath of relief spilling into his shoulder.

“I have concentrated healing on your legs instead of your chest. I have gathered all the medical holy-technique equipment on this ship that could not be used on other wounded. I can have you running until nine o’clock today.”

“…What’s going on outside?”

“Tes,” Gin said, before she continued on with a cold voice.

“Mikawa is destroyed, and Tres España’s Mikawa recon squad has teamed up with K.P.A. Italia’s Mikawa recon squad. It has been decided that, as representatives of the Testament Union, we will be taking over control of the area. The King of Musashi has considered raising an insurrection, and most of the authority held by the chancellor’s officers and student council now belongs to him. The provisional parliament, which leans towards the Testament Union, plans to yield Musashi to the Testament Union as a substitute for the town of Mikawa which is now rubble.”

Muneshige looked up before starting to speak:

“Um…you just said that they planned to yield Musashi as ‘a substitute for the town of Mikawa’, right?”

Muneshige continued: “Then…the one who is taking the blame for the destruction of Mikawa, close correspondent of P.A. Oda and developer of armaments with New Nagoya Castle…”

“Tes. 6 PM today, the princess of Ariadust, Horizon, will be disassembled in the Andamio de la Ejecución on this ship. Earlier, the Shinto head priest who K.P.A. Italia brought with them confirmed her succession in an abbreviated ceremony and announced that she was a legitimate child. Horizon herself has also permitted this.”

Gin paused for a breath.

“K.P.A. Italia’s Pope-Chancellor must be on cloud seven. He just ambled over to have a look and accidentally found a Logismoi Óplo, whose owner just so happened to be caught in a situation where she’s forced to take responsibility by committing ritual suicide… And if that wasn’t enough, Musashi is being yielded to him as Mikawa’s replacement.”

“It appears that the residents of Musashi will be transferred to one of the residential areas in the Far East…one of Matsudaira’s other territories in the Edo period, Shinnai if I am not mistaken. The Matsudaira family Mito will replace the main family, and the recreation of the Testament’s descriptions will continue.”

“I see,” muttered Muneshige. He rested his forehead on Gin’s shoulder, heaving a sigh.

“If Musashi ceases to exist, then the residential areas will be all that’s left of the Far East… They’ll lose everything that could have really been called theirs. And for what? So K.P.A. Italia can have their petty little revenge in the name of honor.”

Gin nodded, “Tes,” and patted Muneshige on the back with her steel hand.

“On the other hand, our main squads have been exhausted. So…”

Gin propped her chin up on Muneshige’s shoulder. She seemed to be saying these next words not to him, but to the empty air behind him:

“…We need to show the unharmed Master Muneshige to K.P.A. Italia. If the wielder of a Logismoi Óplo is with Tres España, K.P.A. Italia will be unable to use brute force to get their way.”

“…We’re weakened by that much?”

“Tes. We have summoned a Tres Portugal armament trading fleet exiting from Sagami, but their arrival is estimated to be 7:00 PM. Other countries may send ships to draw K.P.A. Italia’s attention, but we cannot rely upon that chance.”

“Our country’s busy with the invincible fleet, ‘Grande y Felicísima Armada’, so they can’t afford to spare forces to send here…”

“That is the reason Master Muneshige was deployed here.”

“Well, I can’t really do anything except fight… And one more thing, Gin-san?”

“What’s going on with Musashi now?” He asked.

“Tes. An escort team of around 300 men – Honda Futayo’s unit, we passed by her last night – are deployed in Musashi’s leading ship under K.P.A. Italia’s orders. Her men have secured all of Musashi, and it seems that the situation is still quite relaxed. It has been determined that a double collapse of the ley lines has not occurred, so the state of emergency in Musashi has been lifted.”

“So at the moment, by all appearances Musashi has resumed regular function… Then what about Musashi’s student council president and chancellor? Is he affected by that change of authority you spoke of earlier?”

“Tes. By the decision of the provisional council and the king of Musashi, Yoshinao-sama the Musashi King has taken over. In the beginning K.P.A. Italia tried to take over, but the Hexagone Française-born king would not allow it.”

Muneshige nodded again. After a small pause, he nodded once more:

“About that…it seems that King Yoshinao used to handle negotiations with Tres España in the Pyrenees. He even argued with Hexagone Française for the sake of the people there. He’s a true ally of the weak.”

“How did a governor of that territory end up in Musashi?”

“In the past, Tres España and Hexagone Française were constructing a neutral merchant city but at the same time they were also fighting over it. Hexagone Française sent King Yoshinao to Musashi through the Testament Union, whittling down the local resentment. Whenever there was a conflict, he’d be there to settle everything. The king has both the ability and the will to maintain the neutrality and peace of a location regardless of any incidents. Hexagone Française knew this, that’s why they sent him to Musashi…”

“And now, he is protecting Musashi from the hand of K.P.A. Italia. From Hexagone Française’s view, the king they sent to Musashi through the Testament Union has deadlocked K.P.A. Italia by keeping Musashi neutral.”

Gin, still holding Muneshige, lifted him up. “But,” she said.

“From what Master Muneshige is saying, King Yoshinao is unable to do any more for Musashi. Depending on the situation, there is a possibility that Musashi will be put through what the king’s former territory was put through, and once again through the Testament Union.”

“Tes. It’s a difficult situation. The balance of power between all the nations comes to a point here. I happen to be one of those powers, but… Gin-san?”

“Yes?” Gin responded, and Muneshige’s body sunk downward. His body folding like a crane, he pressed himself against Gin’s waist. Resting his head on her thighs, the roof of his head came to lightly touch Gin’s abdomen.

“Let me stay like this for about half a minute.”

“…Is Tadakatsu-sama’s demise weighing on your mind?”

Gin asked before continuing on:

“He himself chose the manner of his death. Thinking about it overmuch is a stain on his decision.”

“I do not know. But the challenge remains, passed down to the next Honda.”

Saying this, Gin pressed Muneshige against her, pushing in on his back. Unseen by Muneshige, a feeble smile crossed her face, and her next words were ever so soft:

“Master Muneshige, calm your heart. You must show your strength to others. I shall be the one to take charge of all your weakness. Indeed… I hope you will entrust me with them, as much as you are willing.”