Final Chapter: Affirmer in a Place of Passage 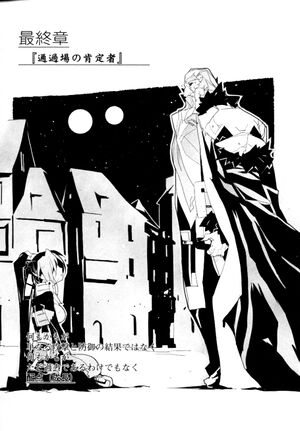 Is more than the result of attack and defense

Everything that was here

Is more than just the past

It was still night. He heard the sound of heavily flowing water nearby and he felt several hard and round objects below his back.

He remembered destroying the artificial lake’s dam and being engulfed by the rapids. He had apparently managed to survive that.

…No, that’s clearly not happening.

He felt like the left side of his upper body was empty.

His organs and everything else had been damaged beyond repair. He was only still alive because his time had yet to come.

But he heard a sudden voice.

I’ll be dead soon enough, he thought in an oddly detached way, but then someone peered down at him.

His eyes had adjusted to the dark, so while it was blurry, he could see a middle school girl in a Far Eastern uniform and a man who was apparently her father. The man frowned but nodded toward Kakei. And…

“Let him rest. He must be exhausted.”

“Thanks for that,” said Kakei with a bitter smile.

Oh, I can actually speak, he thought.

“Where are you going?”

He had spoken to the father, but it was the girl who answered.

“We heard a sound in the mountains, so we went to check on the dam. Then all the water came rushing in, but…”

“Dad says it should be fine if this is all that happens.”

I see, thought Kakei. So I did a good deed in the very end.

The father had to have a hunch who Kakei was. He was probably wondering why Sanada, an enemy of Houjou, would have done this. But what’s wrong with helping people out? I just felt like it is all. So…

“Miss, if you have the time, go visit Sanada to have some fun over summer break. I’m sure both Houjou and Sanada will be under Matsudaira’s rule by then.”

Kakei pulled a bundle of long needles from his wet pants pocket.

They were the needles he had planned to give to Nezu.

“There’s a shrine maiden named Unno in Sanada. Please give these to her.”

“Well,” said Kakei before breathing in and sitting up. The girl gasped, but he ignored it.

He was going to go as far as he could.

He worked to stand up. He stretched his body upwards as if beginning to roll.

And he got up onto his feet. Instead of wobbling there, he managed to balance himself just short of collapsing.

Then he managed to walk forward across the rocky riverside.

Now he wobbled, so he reached out a hand to steady himself.

His left hand firmly grabbed something.

He was inside. It was an academy and he had grabbed the frame of the door leading from the hallway to a classroom.

He all of a sudden found himself inside his middle school academy.

Kakei realized his legs had regained their strength as he entered the classroom.

Every part of the classroom was dyed orange and black.

It was before summer with the exams just completed. He could hear the evening cicadas crying.

A single dark figure stood by the classroom window.

It was a tall boy who held a single long needle in his hand.

The boy cursed and threw the needle to the floor.

In that instant, Kakei sensed everything come to a stop.

The boy, the sunlight, and the cicada cries all froze.

Kakei realized only he could move.

While confirming that his arms and legs could move, he approached the boy.

He saw the needle had stopped just before reaching the floor.

He picked it up, stared at it, and nodded. Then…

He heard voices in the distance.

It was Isa, Miyoshi, and their Great Teacher scolding those two.

…What? But this is our middle school.

He started toward the hallway, but after a few steps, he turned back toward the boy.

In that frozen space, he spoke to the unmoving boy.

“Hey! Don’t you forget what’s about to happen today! Ikeda-sensei is a good person, so make sure to go to him for advice!”

Once he reached the door, he turned back again. And he said more to the still unmoving boy.

He could not continue speaking. Instead, he wiped something from his eyes and dropped the needle in the hallway.

After seeing it stab into the floor, he took a deep breath. Then he looked back into the classroom one last time.

“Come here! There’s something out there that only you can do!”

He turned his back and walked away. He approached the voices calling to him from down the hallway.

At the same time, the bell began to ring.

Time was moving once more. Once he was certain of that, he spoke under his breath.

He pulled his hat deep over his eyes and smiled.

“The sky ocean sure is taking its time.”

Fukushima heard Angie say that while they walked down a major road in the center of Paris.

The two of them and Kiyomasa were carrying the foods they had bought at the festival stands.

Everyone here had spell charms pasted to them and spell circles floating around them.

“It should take about half an hour longer, so we should have time for a short break,” said Kiyomasa who was in a similar state. “Will you be on your way to Kantou as soon as that is over, Wakisaka-sama?”

“Testament. According to the message Kime-chan just sent me, the Siege of Odawara is over. She also said she’s met up with Kasuya.”

She had also heard the result.

…So the Takigawa part of the Battle of Shizugatake is complete.

Kasuya was quite skilled. She had traveled around the Far East fighting in various battles, but would she be able to join the rest of them after fighting in Kantou? However…

“I do wish I could have met and spoke with Takigawa-dono just once more.”

“Fukushiman, you did go to Kantou, didn’t you?”

With that, Angie held out a grilled chicken skewer.

“Testament,” said Fukushima before a thought occurred to her.

She could tell the others about Takigawa. And…

Down the road, a fight was breaking out between some Hexagone Française warriors and Hashiba warriors.

The commotion was already growing as a ring of onlookers began to gather around.

“This certainly is awkward,” said Kiyomasa

“We were fighting a battle not long ago,” said Angie. “I had to wander around a bit before I found a stand that would sell me this stuff.”

That was not too surprising. And even if they were loath to admit it, it was helpful that the automatons under the Roi-Soleil’s command were working to restore order when these things happened.

…I imagine scuffles like that are a way to let off steam.

Fukushima approached the fight. She slipped between the people but entered through the back of the group.

“What is the meaning of this alarming commotion?”

They all turned toward her to complain, but they shrank back once they realized who she was.

She looked toward the Hashiba group and one of them scratched his head and nodded.

“They were the ones that started it, saying it was for what we did to their friends.”

The Hexagone Française group nodded, but when they saw the nearby automatons ignoring them and cleaning the road…

“But how do you expect us to act?”

“We were enemies just a bit ago.”

“You can’t just tell us to get along and expect it to happen!”

In that case, thought Fukushima.

“I will not ask everyone to get along.”

“I can tell thee how bravely the eastern Hexagone Française warriors fought and how skillfully Miyoshi-dono and Katou Danzou-sama fought. Would anyone be interested in hearing that?”

“Will anyone listen to my stories? And does anyone have their own stories to tell?”

When Fukushima asked that, everyone exchanged a glance.

They did not seem to be ignoring her, so she continued.

That is very true, she thought.

She could never again fight Katou Danzou. The same was true for Miyoshi Nyuudou.

She had greatly tested herself against them and gained so very much from them.

She belatedly wished she could have told them how thankful she was and how strong they were.

And she felt the same way about Takigawa who had chosen to retire from the Warring States period.

She wished she had spoken with Takigawa about so much more before she left Edo.

Those who departed never said much to those who were left behind. That had to be because the departed already felt fulfilled. But those left behind…

“We can only tell their stories and hold the memories in our hearts. So…”

Someone stepped forward from the crowd. The Hexagone Française group spoke his name when they saw who it was.

“I would like to hear about Danzou. That was a Celestial Dragon’s final battle. I would be honored to hear the story.” He looked to everyone around him. “Are you not warriors? If you are, then take a seat and be regaled with tales of battle. Warriors should be honored to experience the vicarious awe of a good war story. And if you are not, then leave and get some sleep. …What do you have to say to that?”

They all sat down. Some were a little slower than the rest, but the others pulled them down onto their butts.

Fukushima bowed when she saw it.

“Testament. Thank you. Many of us probably faced each other out on the battlefield, so let us discuss what we did and accomplished. This is a brief respite provided by the Roi-Soleil. So instead of ruining that with more fighting, let us exchange stories of how we fought.”

Everyone exchanged another glance at that.

“I was to the west. I only saw the actual fighting from a distance, but I can tell you what both sides did there.”

A musketeer automaton said that while raising a brand new hand. Fukushima then saw Hachisuka join the discussion with the western unit. The Hexagone Française was quite surprised when they saw her.

“Ehhh!? That god of war was piloted by this little kid!?”

The warriors from the other directions clicked their tongues in frustration.

Seeing all that, Kiyomasa nodded toward them all.

“I can discuss the northern battlefield. What about the south?”

“Oh, I can and I was also viewing the east and west throughout, so feel free to ask me if there’s anything you don’t know. I can probably tell you. Also…”

“Ohh,” someone said upon seeing them. “So we’re reviewing our mistakes, huh?”

They all laughed. Enemy and ally realized both sides were smiling together.

They allowed themselves to laugh and smile together. And they all leaned forward.

With comments of “yeah”, “listen”, or “you see”, they started talking.

There were questions, explanations, groans, and surprise.

“That Illusory Dragon would have loved this. No matter what he said, he loved people. So coming together to talk about his final battle is the best way to see him off.”

Bernard said that and then lowered his head toward Fukushima. And…

“Do not tell anyone I bowed to you.”

Did I? she wondered before looking up into the night sky.

An ocean was forming there and she did not know if they could arrive in Kantou in time even if they left as soon as that completed. 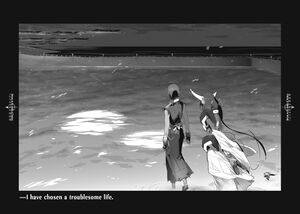 But if she made the most of the present…

…Takigawa-dono and the others would be delighted with what we are doing.

“Now, let me tell you about my battle with Danzou-sama.”

Fukushima began the story. She recalled her memories of the earlier battle. And she wondered if was too much to hope this applied to the person who had departed and not just the person she had fought.

—I have chosen a troublesome life.