“In the end, what did she want? That Kudo-san.”

I muttered in the club room after school. The others just tilted their heads with a “Hmm...” feeling.

Kudo-san, who came and attacked us yesterday, actually knew nothing.

She confessed that while she was receiving the Juji Gatame.

“Noooo! I’m sorry! I actually know nothing! I was just fooling around! I’m sorry NOOOOOOOO!”

It seems as Kudo-san has awaken her power about month ago. Her power was useless on its own, she was living in a fear of this unnatural situation suddenly engulfing her life.

And about a week ago, she said a anonymous text arrive to her phone.

[People of Literature club has awaken power similar to yours].

Straight after receiving that text, Kudo-san has started to monitor our activities, and soon enough realised that we are similar to her.

But thanks to my chuuni powers being a great success, she got swept up in the mood and somehow ended up fighting us.

“I-I was scared! I suddenly awoke to this power, and I’m alone, while you had five of you! So I thought I would lose if I didn’t take drastic measures, and that’s why I initiated the attack first! So forgive me already! Nooooo, it’s gonna break!”

… It was something similar to when a new guy acts all tough and mighty at a new place so they don’t get bullied or something like that, regardless she didn’t seem like a bad person.

She also returned my <Dark and Dark> as well.

I’m not gonna let you go ever again, <Dark and Dark>

“Well, disregarding situation with Kudo-san, the real problem is this person who sent the text.”

That person already knows of our abilities, meaning that person is involved with our awakening of supernatural powers.

“So it might be a possibility that someone made us awaken to our abilities.”

When Sayumi-san said that in an uncertain tone, Hatoko, as if she’s clinging onto hope, looked over here.

“Ju-kun… What shall we do? Is the reason why it was peaceful for past six month… just a coincidence? Is something going to happen from now on…?”

I couldn’t say anything at all.

We are incredibly ignorant when it comes to our abilities. However much we thought about it for the past six months, all that was only a theory, nothing more.

Kudo-san wasn’t our enemy, but in the near future, a real enemy might appear in front of us. It could be that we unknowingly have stepped into a dangerous world.

A fear of unknown has been placed on our shoulders now, atmosphere in this room got heavier and heavier.

“It’s alright, nothing’s scary if we don’t know about it.”

While all high-schoolers had serious expression on their faces, Chifuyu said in her casual [Along my pace] self. She had a potato chips bag in her hand.

Then she tried to open her bag of potato chips, but ran out of her strength mid-way and went back to say her speech.

Everyone was suddenly dumbfounded

Such profound words in such casual tone...

“We learned something like that at school today. Unfounded fear...”

Certainly Chifuyu’s words are correct. If all we could do is to speculate then there’s no reason to fuss about it. To be scared of an enemy that may or may not come, and to ruin our one and only high-school life. That’s nothing but foolishness.

“Whatever happens, we’ll be fine.”

Looking at Chifuyu who said that with her chest forward, I was a bit moved. But being moved by a grade schooler was also a bit annoying, so I just responded how I normally would.

“Tsktsk” She waved her tiny finger.

I gave my all thinking up that name!

It gives us all a sense of unity as well.

Somehow after convincing Chifuyu, I faced everyone.

“Then for now, let’s say our current course of action is ‘Carry on as usual’”

Everyone nodded in unison, looks like no one is disagreeing.

“Kuku, no reason to be afraid of this sort. If something is to happen I, Guiltia Sin Jurai, will protect you.”

I said that in coolest tone possible.

But, after keeping silence for a while, everyone just sighed.

A-Ara…? This is bit awkward.

“Ando-kun is only bark and no bite after all.”

“Ju-kun is the same as always.”

“Anyway Ando, Open this for me.”

Everyone’s reaction was worse than expected. Chifuyu was the worst, dismissing me by saying ‘Anyway’...

Gloomy, I took the potato chips bag from Chifuyu and using the power of both hands, I opened… eh.

I tried again but, no luck.

“Hey Ando, stop being stubborn and use a modern tool instead.”

And Tomoyo hands me a pair of scissors she got from somewhere.

“N-No, I’ve come here this far. I want to open it with own my strength.”

“Please don’t say such a quote-like line in a situation like this...”

I give all my strength into this, but however much force I exert pulling it left and right, the bag does not budge.

“Damn it! Like I’m going to give up!! Aaaaaaaaaaaaaah!”

My strength is escaping my arms and fingers, and my entire body is screaming ‘Just give up already’. Everyone is eyeing me to say ‘It doesn’t matter anymore, so just be quiet’.

There’s no way I can back down now!

I’m going to get stronger! Strong enough to be able to open this bag!

Right now, I will surpass my limit!

At that moment, some kind of cog grind inside of me.

After that, black flame spark out of my body on its own. A flame that can’t be compared to anything before this is being emitted out of my body.

“W-What are you thinking, activating <Dark and Dark> all of a sudden...”

Tomoyo said that in worried voice, everyone else also made shocked expression.

But I’m also one of them confused.

My <Dark and Dark> has begun changing into something that was never seen before.

T-This... This feeling of about to overcome something...

“I surpassed my limit, and awakened it.”

Just by my feeling… just with my instinct, I could understand what was going on.

Under my immense will, <Dark and Dark>, which lives deep inside of me, has reached its next stage.

I finally mutter a name that I thought of ever since we have awakened our powers. 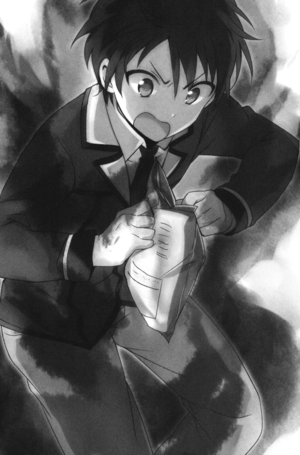 Including myself, everyone in the room was shocked into silence. And after few seconds of heavy silence…

Everyone shouted in unison.

Danger to my dignity as a man… or something?

In the end I couldn’t even open the bag.

“Hey Ando, are you trying to set up for a joke or something?”

“You think I can just casually awaken it just for a joke?! No… just think of it like this. Compared to some abilities that only awaken once one or two comrades die, don’t you think mine is way more useful?”

“Hey Sayumi-san, what’s up with that tone. Are you trying to say that awakening my ability in one of the most weird situation is just what you expected of me?”

“But good for you Ju-kun. You have finally achieved your dream that you wrote on the primary school graduation essay.”

“Ah yeah, thinking back, my dream during primary school was ‘To awaken’.”

“Ando, give me my potato chips back.”

“Chifuyu… can’t you at least pay more attention to me…?”

I’ve finally awakened but… what is this weird indescribable feeling of disappointment?

A scenario where a character awakens right at the end is personally my favourite setting, but to awaken it in a calm everyday-life scene at the very very end --- even calling it the epilogue, is not exciting at all.

“Hey Ando, awakening it is fine and all, but what exactly has happened?”

I won’t know for sure without testing it, but I could understand with just my intuition what was different about this one.

The next stage of my ability <Dark and Dark>