“Humans are beings that seek “Sympathy” after all.”

When was it that Sagami said something like that to me?

I’m not too sure when it was, but seeing how Sagami called me ‘Jurai’, it was around 8th grade.

That was the only time he ever called me by my name.

Back in the 8th grade, that guy called me ‘Jurai’ without any reservation, and being friendly, I called him by the nickname ‘Sagamin’.

“I’ve recommended many books to Hatoko, you know the thing they call bringing them to our side. Even though I knew that she and I don’t share similar interest, I still wanted to tell her about things I found interesting...”

Wanting sympathy, I said that.

Just like Sagami’s words, being able to sympathize is, as a human, something natural.

When you’re ranting or seeking advice from others, instead of hearing the solution to the problem, sometimes being sympathised with [Yeah true] or [You must have had it hard] can calms the mind better.

“For example… during discussion about anime, when people disagree on their views, saying [Sheep] or [Anti], could the reason for all these commotions be related to this feeling of sympathy?.”

Sagami was what people called ‘otaku’. He loved the 2-dimensional world, called heroines in anime ‘waifu’, and declared heroines from his dating sim his lovers. Because of that, whenever we talk, the topic of discussion always leans toward otaku culture.

“Jurai, I wonder why people fight.”

We were talking about people fighting over their preferences in anime, but Sagami said that in such a profound and deep tone.

“Well that’s because if someone bad-mouth things that you like, you probably want to fight them. And if people support things that you don’t like, then you’ll get annoyed at them...”

“Yeah that’s true. [That’s Right]. But if you think hard about it, it’s really strange.”

“From the beginning, since humans aren’t really that stupid, everyone knows deep down in their heart that [Everyone got their own definition of fun]. Like how people have different food they like, and people have different things that they like and enjoy. That’s common knowledge. Even a school kid knows that… Even then, why do people start arguments? Why do Antis go above and beyond just to mock a show? And why can’t Sheep take criticism?”

“I think the answer is because of the feeling of wanting sympathy.”

To feel the same as others.

“It’s just that everyone gets mad when their feelings are not being accepted. It’s annoying. It’s frustrating. It’s painful. It’s horrid. It’s vexing.. The fact that the works they find interesting are getting bashed, or the works that they find boring are being praised… that’s what makes them mad.”

Humans yearn for sympathy... for affirmation.

However not everything about you gets accepted.

Everyone knows this in their head. Everyone should know this.

Despite this, people think that they want to understand everything. They wish that they too are being understood. They pray that they can understand each other.

“It’s funny isn’t it? There’s no way that human will ever reach common understanding.”

He laughs in such a bright and fresh expression, without the slightest feeling of gloominess.

“I love anime and manga, but I don’t really have that feeling of wanting ‘Sympathy’. I don’t really get shocked even if the works I love gets demolished by the critics, and even if the shows I hate get popular, I just think ‘Well there must be someone who like this kind of things’ and end it there. I am just me in the end.”

Sagami, who said that without any hesitation, seemed to have solid beliefs in his words. At least, that’s what I thought back then. That’s why I said.

I said that without thinking about it.

But Sagami denied it straight away.

“That’s why I stay as I am. I don't want to experience anything that hurts me or rejects me, so I’m doing my best to run away from everything. I only look at things I want to, and turn away from things that I hate. Pitiful and disgusting loser, who only acts as a bystander... that’s me.”

By the way that’s going to be today’s answer. 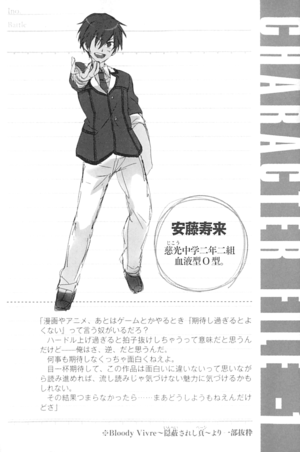 The character called Sagami Shizumu is the reason and origin of everything.

I cannot explain my dark past without mentioning him.

Because I couldn’t understand Sagami Shizumu, and because I tried to understand him, my history was dyed in black.

Let’s stop with playing the victim.

And also stop with being the assailant

In the end I was never part of all this. This all started in a place I wasn’t aware of, and once i was aware of all this, it was already all over.

Let me tell you this now. I am not the main character of this story.

About a girl who could not become a heroine.

And a boy who didn’t even want to become the main character.

A pointless love comedy story which I don’t even know if it was even needed.

If that is ok with you, then let’s begin.

Now, let’s start the end of the beginning.