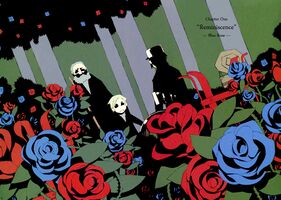 “Okay! I have a good idea. Take me with you. I wanna travel too,” the child said.

The traveler with the short black hair, and the motorrad (Note: A two-wheeled vehicle. Only to note that it cannot fly) beside her, upon hearing this, fell to an awkward silence.

It was a pretty looking garden that seemed to be taken with great care. Beautiful red and blue roses blossomed all around, and there was also a marble fountain.

“Great idea, huh? I’ve been thinking about what you said. I’ll be able to look at a lot of other countries. Oh, and I’ll be able to study a lot too, right? So take me with you,” the child said with an ecstatic expression on his face.

The traveler who was telling stories about her travels upon the child’s request, made an awkward expression.

“I apologize, but I won’t be able to fulfill that wish.”

“Uh-huh, no way,” added the motorrad, and the child spoke in a loud voice.

“Why! How come miss traveler is able to travel, but I’m not to?”

He turned to face the old man on his side.

The old man made an awkward expression, but firmly said.

“Why? Are you saying you won’t follow my orders? Is that what you’re trying to say? Huh? Huh?”

The child held onto the man and shouted this as if he was attacking him.

Seeing the man’s embarrassed expression, the traveler got up from her seat, and held on to the motorrad’s handlebars to push it.

The child held onto the traveler after wobbling towards her.

The traveler looked down towards the child and answered,

“Yeah, and there’s no room for you to sit down, you know,” the motorrad chimed in.

After she bade the old man farewell, the traveler started to leave, pushing the motorrad with her. The child screamed desperately while pursuing the traveler.

“Take me with you! I’ll do anything you say! I’ll even eat my carrots! I’ll behave! I won’t even say that I can’t sleep without mom! So please, take me!”

After telling the child not to follow her one last time, the traveler left, ignoring the child’s frantic cries.

As the traveler disappeared with the noise of the motorrad’s engine, the child cried and wailed loudly.

It was a pretty looking garden that seemed to be taken with great care. Some beautiful red and blue roses blossomed all around, and there was also a marble fountain.

The child buried his face into the arms of the old man who knelt next to him.

And he cried. He cried and cried.

The old man who aged even more greatly than before waked the child who was now a young man.

The child who was now a young man had fallen asleep in a chair in a luxurious office. After the young man thanked the old man, he told him about the dream he just had.

“Sorry for being a pain in the neck.”

And he told the old man that he still remembered that day clearly, and apologized to the old man in a gentle voice.

The old man quietly smiled and bowed respectfully to his king.