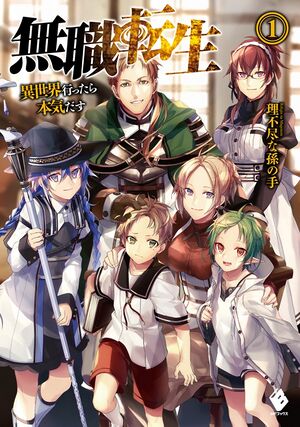 "Mushoku Tensei -Isekai Ittara Honki Dasu-" (無職転生 ～異世界行ったら本気だす～) is web novel a written by Rifujin na Magonote. There is also a light novel with illustrations by Shirotaka. Currently ongoing, there are 24.5 volumes written by the author on his website and 8 volumes published by KADOKAWA / Media Factory. A manga based from the novel is serialized in Monthly Comic Flapper. The Web Novel has been completed.

The Main Story of the Mushoku Tensei web novel has now been concluded.

The Mushoku Tensei is also available in the following languages:

A 34-year-old NEET otaku was chased out from his house by his family. This virgin, plump, unattractive, and penniless nice guy found that his life was heading towards a dead end. He recalled that his life could actually become much better if he can get over the dark history of his life.

Just when he was at the point of regret, he saw a truck moving at a high speed with 3 high school students in its path. Mustering all his strength, he saves them but ended up getting run over by the truck, which kills him.

The next time he opens his eyes, he had reincarnated to a world of swords and magic, as Rudeus Greyrat. Born to a new world and a new life, Rudeus declared, "This time, I'll really live my life to the fullest with no regrets!" Thus begins the journey of a newly made man. (Original from animesuki.com)

If you enjoyed the read, why don't you tell us in the forum Feedback thread
You can find the EPUB version of the Volumes in the forums here 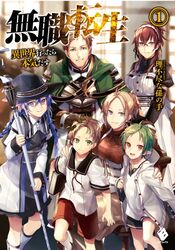 Note: Volume 1 text is primarily translated from the light novel version, whereas subsequent volumes are from the web novel.

Note: The volume 2 text of the first few chapters, up to the first side story, is primarily translated from the light novel version, whereas subsequent chapters and volumes are from the web novel.

Young Man Period: From Intermission to the Finale