#3: It's Obviously a Cooking Contest and it's still Mayhem[edit] 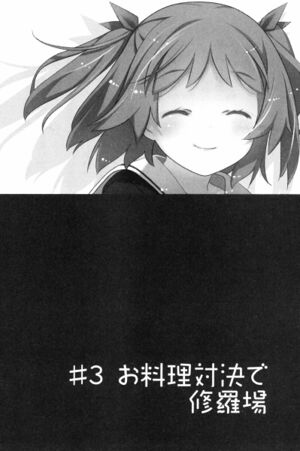 While my childhood friend was making dinner, I simply waited together with my girlfriend.

Such a rare and horrifying occurrence goes on silently in my kitchen.

Firstly, Chiwa's cooking is already very dangerous, and Masuzu is even joining in. What kind of quest is this? A battlefield where you don't know the requirements to clear[1], filled with buried landmines.

I was trembling on the corner of the sofa in my living room, Masuzu sat beside me reading Saeko-san's entertainment magazine, raising her head in a seemingly bored manner.

"Nothing─there's nothing─♪ So Natsukawa can just sit there and wait!"

While answering with a cheerful voice in the kitchen, the "go, go[2]" noise from the kitchen knife can be heard. Someone who is used to cooking would never make such sound while cutting.

"Er, Harusaki-san, do you know how to cook?"

Masuzu asked in a small voice.

"Basically no, the meat and potato stew I made just now also turned out as a failure."

The "Chihuahua special creative meat and potato stew" with tomato, no matter the color or the taste, is unforgettable.

Thus, for some reason Masuzu, with a face proud of victory, relaxed her shoulders.

"Childhood friend-san's cooking are rather abstract[3] huh. If it was me I would prepare a warming dish that will never change in taste."

"That's because it's instant food, you know."

"And it only needs three minutes. The better ones only take one minute chin! Isn't that great?"

"That's why it IS instant food."

However great you proclaim it to be I will only feel troubled. Also what is chin? Are you from the Showa period?

Chiwa brought a pot to the living room.

I made my determination to be prepared to face whatever might come, and looked at the Chihuahua meat and potato stew.

Eh? For some reason there is some appetizing smell......

Opening the pot, the meat and potato stew in the boiling soup came into view. Both the onions and the potato looks good, it should be delicious. At least it looks like food.

"Ehehe. Actually during the summer break, I studied a bit of cooking with Ai. Because Ai is really good at cooking."

"She said I only need to follow the recipe, especially if I control the ratio well, it isn't hard. Although I still need practice on my cutting."

Honestly the carrot and potatoes don't look too nice, but the taste is more important.

Picking up the potato with my chopsticks, I blew it for a while and placed it in my mouth.

It's edible! It's really edible!

Not too sticky or wet, completely the taste of meat! Although a bit bitter from being overcooked, but it's still quite good. I sometimes overcook mine too.

Chiwa took my bowl happily, placing lots of meat and potato stew on it.

On the other side, Masuzu turned white. Also, putting the potato into her mouth to chew; she made a dull sound as she ate.

Chiwa moved over while holding back her laugh.

"So─how is it Natsukawa? Is it good? Does it fit your tastes?"

Using an unexplainable voice, she said with a proud face.

Masuzu's chopstick hand trembled as if she was about to have seizure.

Ignoring Masuzu-san who was mumbling non stop, Chiwa took the rice on my face and put it into her mouth.

"Don't let your blood pressure rise, Natsukawa! Let's get along well! Our relationship is good, right♪"

…...it's getting really weird, with these people.

That good relationship is just on the surface, the inside should be even more dangerous than before our summer break trip.

"Bu, but I can also do it! Something like cooking."

"Is that so? Then is there any dish that's your specialty?"

"With the ingredients, I can do anything for you."

And then Masuzu-san stared at Chiwa with some bloodshot eyes while talking big.

Chiwa, with a blank face with a ｢Eh, that's great｣ look as she opened her eyes.

"Then, why don't you make something? There still are some potatoes and carrots."

Masuzu placed her left hand on her face, stood up with a bizarre pose, and walked away.

Thus, the suspect denied the charges.

Masuzu shouldn't know how to cook. During the trip she beautifully angered Fuyuumi with her skills, and always ate Weider in jelly, Calorie mate, the type of stuff that collar workers usually eat when they work overtime.

"Why did you have to say such provocative words, Chiwa?"

Her cheeks full with her own meat, Chiwa stared at the kitchen with the eyes of a fierce dog. Unknowingly, a cooking war started.

Eh, that was fast!

On the tray Masuzu carried out from the kitchen, is a cup noodle with steam on top of it. …...ah, I already guessed it would turn out like this.

"It's ramen. How's that? With the ingredients, even I can do it."

"What are the ingredients?"

"Can you even call those ingredients!?"

"Boiling hot water and a cup of noodles."

"You only described it with more details!"

There, I patted Chiwa's shoulder. I don't want things to become more troublesome. Even like this, as long as there is no tragedy from cooking failure, it's already enough.

Taking the lead and saying ｢itadakimasu｣, I started eating the noodles.

I feel extremely exhausted. Since when did my girlfriend get like this? Where did that cool beautiful returnee woman go?

Chiwa moved over to her with a serious face.

"You know, Natsukawa. I want to let the hardworking Ei-kun eat nutritious food."

"Instant food or whatever is not bad, but I still feel that homemade food is still better, right?"

Disappointed─, a drooping shoulder Masuzu could be seen. Somehow, she looks really pitiable.

"Don't worry, after all the soup packet can just be added after cooking."

I took the soup packet from the kitchen and poured it into the cup. Now I can eat this. Although I'm still full from the meat and potato stew.

Masuzu looked dazed, and when she met my eyes, she looked as if she would say,"I missed it!" and curled her lips, and shifted her gaze.

Tch. What was that.

Can't you let me see that cute pouting face some more?

The three of us made tea and drank together peacefully after dinner.

"It feels like it's been a long time, since only the three of us are together."

Sipping the hot green tea and staring at us, Chiwa nodded.

"Before Himecchi and Ai joined, it was only the three of us."

Masuzu suddenly made an "Oh, I remember" face.

"To be honest, I came here for the issue of Akishino-san."

"Me too, I wanted to discuss this with Ei-kun."

Looks like Chiwa also thinks that we can't just not care about Hime.

"Chiwa, what did you think of Hime's behavior today?"

"At the start I thought something angered her, or maybe......she was just acting awkward? Or rather, it was as if she were doing this because she was being bullied?"

"But the reason for becoming like this is unknown."

I feel that I know said reason. Of course, it's not something I can tell to Chiwa.

"Fuyuumi is also involved; it should be better if we do something about this."

"If this goes on, our 'maiden's club' will fall apart. …...actually, I have an idea on how to solve this, can you hear me out?"

Masuzu made a “lend me an ear” gesture, so Chiwa and I leaned over with our foreheads touching.

“It’s definitely a good idea, but will this go well?”

“Thus, we'll have to see how Eita-kun performs.”

Masuzu looked around the living room.

“Do you have the things we need?”

“You should have those in the storage room, right?”

Before I managed to talk, Chiwa answered in my stead.

“But, why does Natsukawa know this? That's something about Ei-kun in middle school.”

“I heard about it before. I am his girlfriend after all!”

Looking at the smiling Masuzu, Chiwa’s lips trembled and made a “heh—” sound. She only knew that because she has my notebook, and made it her advantage with just this simple method.

“Nah, I know everything about Ei-kun without anybody telling. From first grade until now.”

“Hah, then do you remember how much bread Eita-kun has eaten until now?”

“Ei-kun is not a bread lover— he likes rice— you are his girlfriend, and you don’t know that?”

“What are you so happy about! Eita-kun can immediately understand any JoJo reference!”[5]

Let’s not talk about the meaningless quarrel, my heart feels heavy.

The three of us went to the storage room in the garden, and took out an old cardboard box.

The things that attracted me a lot until last year, sealed away heavily with masking tape. No signs of me wanting to unseal it. This is something that I would kill myself over if it gets spread out.

“Are we really doing this?”

“We already decided on this, Eita-kun has no room for refusals.”

“No problem! Ei-kun can surely pull it off!”

Even Chiwa is saying such things, I can only nod in agreement.

This is all for Hime's sake.

To shoulder that responsibility, of hiding our fake relationship.

Leaving the details for tomorrow, Masuzu stood at the door.

“It’s quite late, should I see you home?”

“Don't. I’ll take a cab. ……if anything happens I will not stay silent too."

“Is that so? Do you want to take the leftover meat home?”

With a scary face and voice, Masuzu disappeared from sight. She looks a bit staggering from behind. Is it because she is still unhappy about losing the cooking battle?

If it was the usual her, she would have glossed over the showdown with Chiwa rather easily. Why would she now take this, head on?”

“Nah Chiwa, something must have happened between you two right?”

“I said it's nothing! However, Natsukawa is also my rival. I absolutely don’t want to lose to her.”

While saying this, Chiwa’s eyes were shining.

“That’s because, Ei-kun, think about it. Have I ever won something against Natsukawa?”

Since the founding of “Jien-otsu”, Natsukawa’s strategies always manage to fool Chiwa. But today Chiwa totally rolled over her.

“Even though I’m not Ai, epic victoryyyyyy—! At these times I want to say this.”

Chiwa held up her fist, looking at the autumn sky. Holding her hand, celebration like, as a sign of victory.

“Ei-kun, you're studying until quite late? I put the potato and meat stew in the refrigerator. Take it and eat if you’re hungry.”

“It won't do if you just eat instant food, you know?”

Chiwa said this by my ear, smiling.

“You know, when looking at Himecchi today; it reminds me of the old Ei-kun.”

“Back in middle school, Ei-kun also had bandages like this, right?”

I had a period where I did wear a “fashionable bandage” like Hime.

But, it sure is hard to bandage with one person. So like Hime I simply bandaged it up, and it fell off.

Seeing this, Chiwa helped me to re-bandage it a few times.

Because of constant injuries while practicing Kendo, Chiwa had very good 'bandaging skills', her bandaging was a lot better looking than mine.

“I’m really grateful for that time.”

“Eh—you are saying thanks now? That time you were always saying ‘don’t do needless stuffs’, ‘I won’t care if you get cursed’ or something along those lines.”

Looking at me who was wiping sweat from my forehead, Chiwa laughed.

“If it’s Ei-kun, tomorrow’s plan will surely succeed, let's do our best.”

Cooking for me, and waking me up in the morning.