Extra: Collection of Design Materials of Alice and her Merry Friends[edit]

Formerly known as Nitroplus, a popular lead animator, illustrator and mechanic designer. Currently free. He managed the character design of the original gamebook that brought forth this novel, "Queen's Gate: Gate Opener Alice." Other important works of his have been "Deus Machina Demonbane," "Blassreiter" or "Muv-Luv." 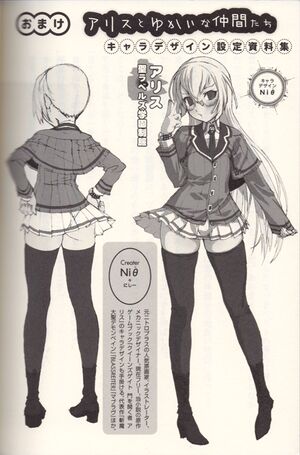 In the original work, her setting only had her in black battle clothes, but we additionally requested Mr. Niθ for her to wear student clothes in her daily life, and a diver suit as equipment for her Treasure Hunter role. According to the instructions we attached along the novel, the Diver Suit would be like "orange lines marked over black clothes", but the school uniform we left entirely to him. When the staff gathered and we saw the design, we only said two words: "Nailed it!" 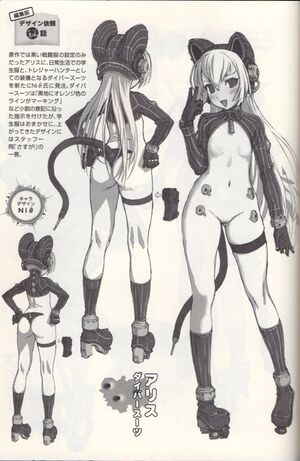 Blond hair against Alice's silver hair, dolly eyes against slant eyes, she has a design in contrast with Alice's. Still, a flat chest completes the whole package. Her Pilot Suit became a bold design typical of Mr. Niθ. Maybe it's because her initial impression numbed our senses, but the editorial staff promptly agreed with her exposed buttocks: "If it's the buttocks, it's OK!" 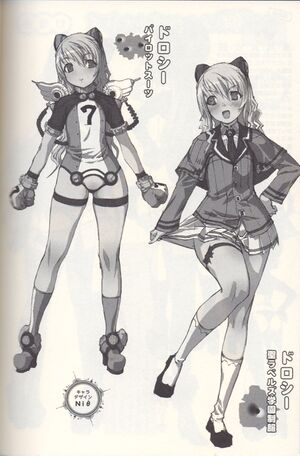 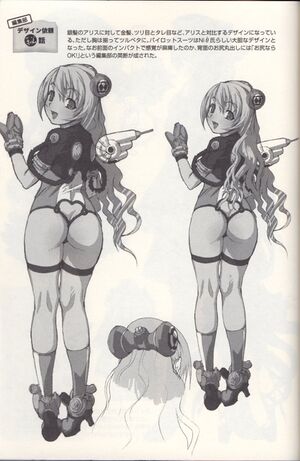 We requested for Lynn to be a tentacle-wielding songstress with idol-like frill clothes, voluptuous despite being a loli. Her tentacles are cute with the striped pattern, too. And it gives way to a lot of underwear fanservice too! Thank you very much, Mr. Niθ! 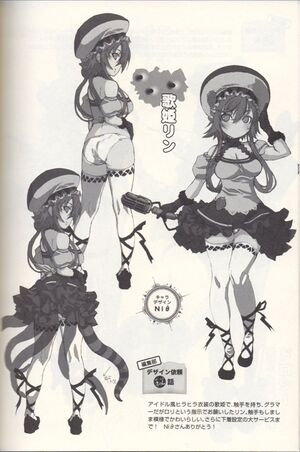 She's an illustrator. Excelling in costume design, she has an illustration column at the Wanibook magazine "Comic Gum" and manages the "Sakura Brand." She introduced the design for doll clothes there, already for sale. Besides fashion design, presently she's participating in illustrating girls' books, his most important work being the artwork for the "Golden Prince Series"[1] in the "B's LOG Pocket Edition".[2] 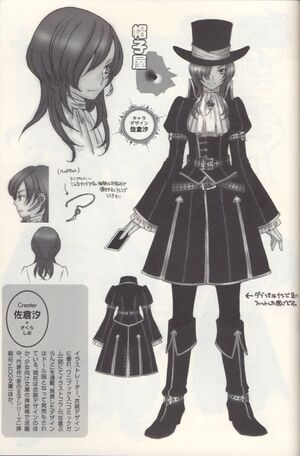 Despite the two homunculus subordinates of Alice being featured in the same world as her, since they were made by the same designer, we requested them be designed by Miss Sakura Shio and both given an unified image. Since they were inspired by the characters from "Alice in Wonderland," Sakura's good taste at likening Hatter to the spade suits while March Hare's was more like a heart suit was admirable. We did ask that Hatter's hat had a "Wild Wild West" feeling to it. 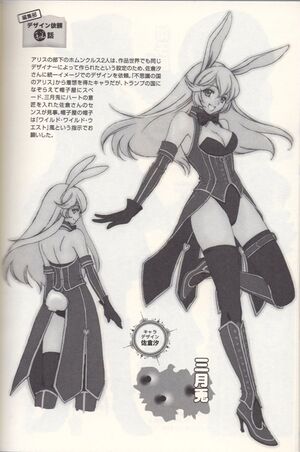 As the official illustrator of the voice actress Inoue Kikuko, we received great support from the "big sis" fans.[3]

Though well known for his super-deformed pictures, his range of designs has been quite wide, from mechas, to animals, to creatures aimed at all ages. His most important work is the "Miss Kikuko Manga" at "AnicanR." 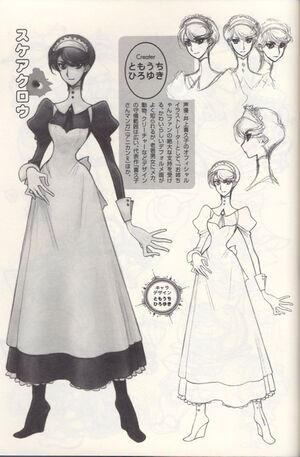 Dorothy's 3 human subordinates, we requested Mr. Tomouchi Hiroyuki to design them. He gave us a wide variety of colorful expressions and poses as reference for drawing, which we really appreciated. Like Lumberjack, who has a powerful, charming design to her, which are Mr. Tomouchi's fortes. 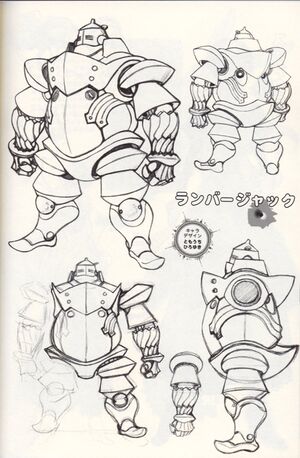 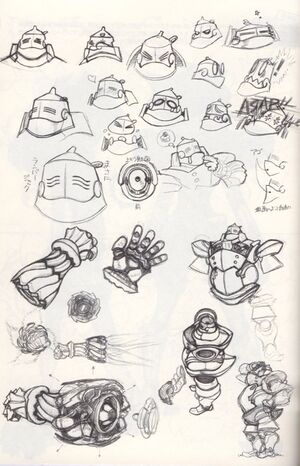 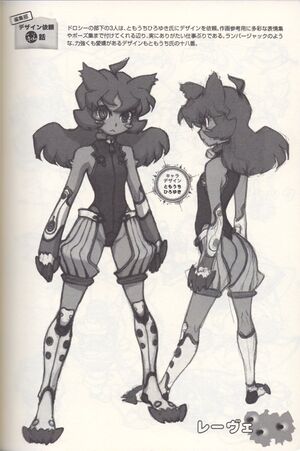 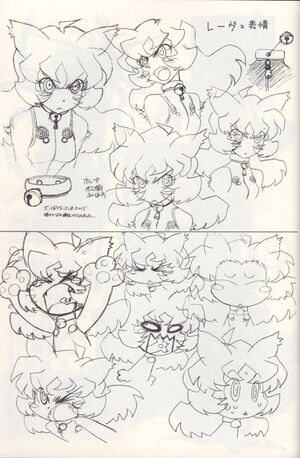 We commisioned Mr. Tomouchi to draw Irukinuf. Concerning this staff of God's tentacles, we incorporated a design of a certain Spaguetti Monster. Other than the design, it was Nakamura Kanko who took care of the art.

Swodar is actually a quite good person, but we gave his design an villainous look as if he was the enemy boss.

Concerning Faye, there could be spoilers regarding her concept.

Since Hikita Bungorou is an historical figure, we went with a safe design. However, I got obsessed over his Shinai weapon, so I purchased the real thing to use it as reference material.

We asked the Tentacle Ninjas to be ninjas with a Cthulhu look to them, but we never knew small fry could look this good!

The Trump soldiers were so cute, they surprised us. 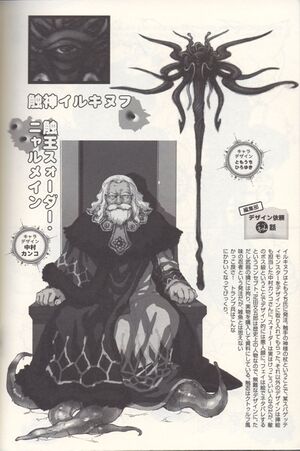 This woman comes from a family of gag mangakas, her forte is the depiction of manly men. If needed, she can draw beautiful women and little girls. As she plays an active part in the Super Robo circles, she's accustomed to drawing robots as well. Her most important work is the "Benrey Limited Company."[4] 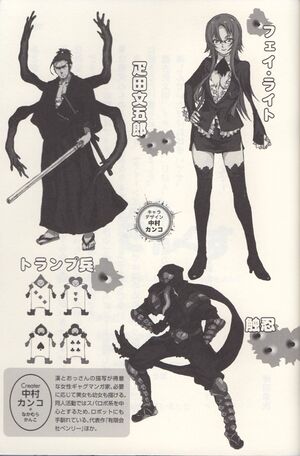 "I intended to write just one book, but before I noticed I had written all three. I saw QB was turned into an anime, so I wouldn't be a man amongst men if I couldn't get on with this. Even though I understood that much, I couldn't stop."

Greetings, all you 50 hundred million Megami Bunko readers around the world, this is Eiji Okita.

Also, since this is a fiction story, there will be many differences between the fancy physics effects described in the narrative and the ones in reality. So please be mindful of that.

For this novelization, I tried to incorporate many elements I couldn't include in "Queen's Blade". Super-ancient civilizations, mechanics, UMA, UFO, supernatural powers, sects of false gods, etc...

I'll be pleased if you enjoyed it.

As for the next volume, Alice is due to develop a "sense of wonder" and a lot of activity regarding the Gate, with the different world Hyperborea at the stage.