Difference between revisions of "Silver Cross and Draculea:Volume05 Final Chapter" 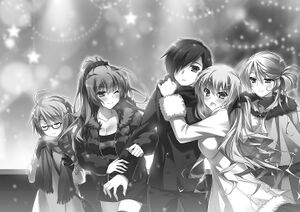