This title is too long!:Volume3 Chapter3 2

I'm a high school girl and a rookie voice actress, currently strangling my classmate who is my upperclassman and a Bestselling Light Novel author.

This is my predicament at the moment.

Why is sensei looking so blissful?

Why is he looking so happy?

Why is he looking so peaceful?

He's like a baby looking up at his mother, doted by him.

Him to be very cute.

While I was strangling him.

I felt that I was hammered in the head.

The scenery in my vision started to sway, and I nearly fell over.

If I had not been seated on a chair, I would have fallen over as I could not grab the table.

Miss Satake squealed so loudly, my eardrums were nearly broken. 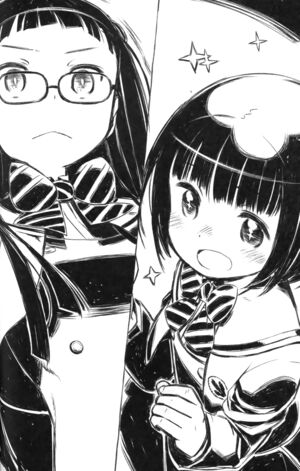 I understood that the sudden topic about romance had caused Miss Satake's pitch and blood pressure to rise.

"Well, since I said that much, I'm going to spill the beans, but don't tell anyone, okay? If you let others know, I'll really look down on you, Miss Satake."

Miss Satake timidly responded to the rather stiff toned sensei.

"Well, Nitadori's my pen pal. We knew each other since two years ago."

Well, some extras were added, but it's basically the truth.

As a fan, I sent sensei a letter, and received a one sentence reply. In that sense, we met each other.

But the relationship between us never improved. Sensei's the one lying that went "She's my girlfriend", so it's not weird for the listener to interpret accordingly and be fooled.

I didn't know if she did believe sensei's words, but she showed no look of suspicion.

"I had to stop schooling for a year, due to some reasons. When I was finally able to do so, Nitadori told me about this school. "There's a private High School that doesn't have much issues with attendance. I too started attending last year. I think it might be suitable for you--what do you think?"

This isn't the truth.

"So that's why I transferred into this school. Of course, the good is that I'm able to attend the same school as her. I never expected our class to be the same, but since there are three classes, the chances are basically one in three."

Sensei just went ahead with improved liars. It's what this 'liar' in me said, so it's pretty convincing.

"So we decided to keep our good relationship a secret. That's why we never spoke to each other."

He never said 'we're dating', but 'we're on good terms', so he's not completely lying. As for 'secret' and 'not saying anything', those are facts though.

Sensei's probably in the flow of things as he peppered some facts in the lies, able to continue talking, and had no need to lie.

I know sensei's becoming more and more used to lying.

"But I can't talk to other girls alone. I can't hide this from Nitadori. Knowing and doing is a further no go. Miss Satake, do you understand why Nitadori's trying to stop you?"

I knew sensei was lying.

But for me, it was the truth.

"Or do you want to butt in, Miss Satake? How about it?"

Sensei's like a different person, saying such forceful words.

Miss Satake lowered her reddened face. It seemed she's not the kind of weak-willed girl to be beaten however.

"But...it's kinda hard to believe so suddenly. Both of you don't seem to be on that good terms."

"Really? Well, I don't have any proof, but you should know I can't go to the cafeteria with you. If I do--I'll get strangled by Nitadori."

So I shouted instinctively,

I saw sensei give a natural smile, and understood.

Sensei said those words to get a reaction from me.

Till this point, everything was according to sensei's plan.

In that case, i could only play along.

I quickly took a deep breath.

"Goodness! I just relaxed, and you're doing that again--I'm going to tell everyone in class of the secret if you keep this up. Hey, you fine with that? Really?"

I was fuming at the front part, not holding back in my tone. At the back part, I was grumbling like a lovey-dovey person.

No script, no rehearsals, but I felt it was a new act. This sort of thing is trivial to me.

After playing along with sensei for the final act, I said to Miss Satake,

"Sorry to hide this from you. That's how it is, it's hard to say this…"

The trick's to give a really apologetic look.

"Of course, we won't order you to remain quiet. Sooner or later, we'll reveal to everyone, so before then, if you're willing to keep this a secret. I'll be really happy. Of course, we won't force you, and we can't do anything even if you return to the classroom and declare this to everyone."

The trick is to be humble and give an apologetic look, showing a hardened stance and have her understand that 'if you do that, your reputation' will drop'.

"We-well, in that case...anyway, I don't have any intention to snatch anyone's boyfriend…"

Without her looking, sensei showed an awkward look, his hands giving a victory pose.

I felt that he was saying, please continue acting, until the cut.

And like the knockout bell of a boxing match, the bell signalling the end of the long fourth period rang.