“Hey, you lazy Zashiki Warashi. What is this Hi no Enma thing anyway?”

“I suppose you could call it a Japanese succubus. It’s counted as a blood-sucking monster, but it’s actually an enemy of Buddhism. In other words, it’s a female Youkai that uses her charm to get in the way of asceticism.”

“Oh, a succubus, you say? I see, I see. A succubus!? You mean like the one in a micro-bikini living in our attic!?”

“Don’t act like that, Shinobu. It’s disturbing. And I believe this kind destroys the victim’s family as well.”

“But I wonder how they worked the Hi no Enma into the criminal Package. Especially into a Package to attract all the girls around you.”

“It sounds ridiculous, but it’s no laughing matter. The market toward people who want to be popular is huge. In a broad sense, it covers fashion. In a deeper sense, there’s plastic surgery. And if you want to get into the shadier stuff, there’s the power stones you can buy on the internet. If you include love songs and movies that virtually fulfill that desire, it might be the biggest market in the world.”

“But the Hi no Enma is a female Youkai and primarily messes with male ascetics.”

“You mean it wouldn’t make girls fall for people like this Package does?”

“That’s right. And I might have called it a blood-sucking monster, but it can’t turn other people into its own kind like a vampire.”

“So did they use that fact to create a Package that creates more Hi no Enmas? That is, the target girls are made identical to the Japanese succubus?”

“Made identical? You mean instead of having the Hi no Enma attack them, the targets are drawn in by doing the same thing as it?”

“You say it’s a blood-sucking monster, but what’s the definition of blood here?”

“Human blood, of course. I doubt it counts if they eat a rare veal steak.”

“But what if anything counts as long as it’s human blood. There’s more than just A, B, AB, and O. There’s also artificial blood.”

“And calling it artificial blood is a bit of an exaggeration. It’s nothing more than a few minerals and electrolytes added to saline. In that case, we’ve already seen the artificial blood they’ve been spreading around.”

“This popularity Package turns the girls who drink those things into succubi and makes them obey your will. But it’s nothing to worry about now that we know the trick. C’mon, let’s go unmask them!”

She was one of Academy City’s seven and Tokiwadai Middle School’s two Level 5s. Her long legs were wrapped in stockings with spider web embroidery and those legs dangled down near a stool’s support column. The amber polished counter reflected the doll-like features of her small face and her long, honey-blonde hair. People found it hard to believe her proportions were those of a middle school girl and those proportions seductively pushed out the blazer of her Tokiwadai winter uniform from within. She impolitely rested her elbows on the counter and turned her bored eyes toward the flat screen monitor installed over the employee’s head.

In the old days, it had been common for professional baseball games or horse races to play at ramen shops or set meal restaurants, but that was technically against the law. That led to a demand for programming that store and restaurant televisions could play without relying on TV broadcasts. However, the spread of those had only accelerated people’s trend away from television, so there really was no winning in that business.

(Is that a magnetically controlled monitor? Instead of RGB colors, they use CMYK. I’ve heard they don’t produce blue light and can display resolutions higher than 4K8K for things like art museum and art introduction shows, but they tragically never caught on because the broadcast signals couldn’t keep up.)

If they had a screen like that here, she guessed someone in the restaurant loved gadgets.

At any rate, what did a truly high-class girl eat?

There were a variety of answers, but Shokuhou Misaki never touched any of the foods in convenience stores or family restaurants that would list a single vague ingredient such as “Salisbury steak”. On the other hand, living solely off of high-class French food requiring a reservation seemed even cheaper and felt like something a steak-loving middle-aged man would do.

“Sorry about the wait. There is your cheeseburger, French fries, seven veggie salad, and orange juice. Is onion dressing okay?”

“We will prepare a mini custard pudding pie for your dessert.”

She smiled and looked down at the tray on the counter.

It all looked like the foods found at fast food restaurants the world over and none of it was particularly expensive. Nevertheless, she had a good reason for choosing this as the ultimate luxury.

Those were the main draw of countless restaurants across Japan, but what if they were made naturally delicious by a natural professional using natural ingredients? This restaurant was the answer. The ingredients were kept cheap, so there was no major risk. But at the same time, the restaurant did not raise their prices solely to improve their image. The façade of fancy words was thrown aside and they made something anyone would want if they knew just how difficult it was to naturally enjoy what was natural.

Restaurants like this were hidden around Academy City and only those who knew the list could avoid the many landmines and enjoy these natural foods on a daily basis. In Academy City’s case, most restaurants used cloned meat and vegetables grown inside farming buildings, so finding natural ingredients better than that was a high hurdle indeed. The bottles of water and café desserts Shokuhou ate on a daily basis were also hidden masterpieces buried on the shelves.

However, there may have been another, completely different reason why she ate those natural things so often.

Even among specialists, opinions were divided on why people developed preferences in food. One theory said there was a deep bond between the sense of taste and memories. Liking the taste of your mother’s cooking was proof of growing up in a happy household. Conversely, a child who was always lonely with both parents at work would associate the flavor of ready-made convenience store meals with those negative memories. What this theory said about disgusting prison food went without saying.

People often said their tastes changed when they grew up, but that could be interpreted as overcoming their unpleasant memories as time went on.

Shokuhou Misaki grabbed a large paper napkin from the counter, wrapped it around the cheeseburger, and accomplished the miraculous task of elegantly eating that handheld food which was much larger than her small mouth. One look at the hint of relaxation around her eyes was enough to see that something comfortable had come to mind when she tasted that combination of juicy meat, melted cheese, crisp lettuce, sliced tomato, and spices kept subtle enough to not overpower those other traits.

She was naturally enjoying this natural thing.

There was no need to get excited and she did not let her high-class world take this from her.

With the giant cheeseburger in one hand, she looked to the side. 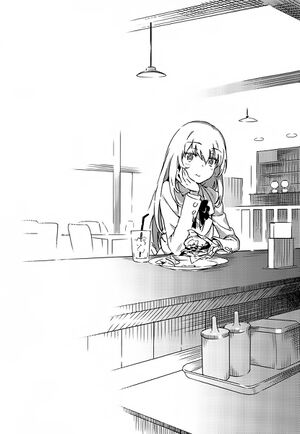 This was an area primarily targeted toward university students and the first floor of this building contained a convenience store. But from the second story window, she could see a small intersection.

(That’s the intersection where I first met him, isn’t it?)

Those two people with no previous connection had bumped into each other there.

Their paths had crossed.

It was not a particularly beautiful location and it had not been the kind of lovely meeting seen in dramas.

However, it had been a special event for the girl named Shokuhou Misaki.

Even if it had all come to an end and their paths would never cross again, it had been important enough to strongly influence what had happened to her from then on.

That was when she had first met the pointy-haired boy named Kamijou Touma.

That time in August of the previous year was a strong contender for the happiest period of her life.