It was hard to tell where she was hurt. She was dragging a leg, and her eye was barely covered by gauze. Anyone would feel pained to see that.

What was worth noticing wasn’t her appearance.

Kumokawa Maria saw that she was holding the scabbard with a Western-styled sword in it.

She had fought against opponents who could use inexplicable powers and powers that didn’t follow the norm, but that sword was giving off such pressure that even Kumokawa Maria was shocked.

Amidst the hill of plant factory containers, Kumokawa Maria’s throat cried out.

“This is a dangerous place.”

She had once forced Marian Slingeneyer to retreat, but she realized that the values back then weren’t worth referencing.

That sword had some existence that caused her to have this thought.

“But that’s the shape of a sword. The attack range is already limited. First, we run off in three directions to divert the enemy’s target. Once one of us gets chased, the other two can attack from the blind spots. We’ll still have a chance of winning.”

“Do we need a flying device? I’m not used to this.”

Saflee was smiling so casually that it was intriguing, but it would be the best move if they could suggest it to themselves. They would really end up dead if they couldn’t move due to fear.

Kumokawa Maria’s eyes were locked onto Marian. She grabbed Saflee beside her.

“You haven’t reached the realm of martial arts, so I don’t really want to take it out, but if it’s a hunting tool made in Australia…”

“Simpler than that. We would tie rocks on both ends of a thin rope and use centrifugal force to throw it out. This is something that’s used to bind birds’ feet together, but it can be used to aim at a human head.”

“Centrifugal force, is it?” Kumokawa Maria muttered. “…Then it certainly matches my ability.”

"In my country, guns and gunpowder came in late, so this thing is good enough. Though, it's going to rust if I keep using it."

They decided their plan.

No matter what the enemy did, they had to run away from her attack range.

It was a basic thing, but everything was a matter of life and death, whether it be the control of distance or the fight to determine the winner. And no matter how it started, no matter what destructive power that sword had, once they had thrown out that flying tool, it would definitely cause damage to the enemy.

(If we don’t run off in the wrong direction, if we don’t run into a dead end made by the containers of the plant factories, we’ll have a chance of winning.)

Kumokawa Maria and company forced themselves to focus and try to be positive.

She casually raised the sword that was still sheathed.

She turned all their hopes to nothing.

Lightning came down from the sky and went through the golden sword.

With Marian Slingeneyer at the center, a large flash erupted as shockwaves went in all directions. The asphalt shook mysteriously, and this instability caused the plant factory containers to collapse like they were critically hit. The snow danced around, and they were blown away by the shockwave. Whether it was Kumokawa Maria, Oumi Shuri or Saflee Opendays, they were already worn out trying to quickly raise their hands to protect their bodies.

The sky was distorted.

It wasn’t as simple as the thick clouds that were sending down snow scattering away.

It was true that one could see the round clear sky as the clouds were blown aside. But before that, what should have been a blue-colored sky changed abnormally. It was like a TV set with the screen jumping about. There was an obvious instability.

It looked like it had come from a different dimension as it broke through the clear sky.

“Your brains alone won’t be able to understand that.”

Then, the golden sword was raised above her head, and the sheath let out a mysterious bluish-white spark.

Kumokawa Maria had a disastrous premonition for unknown reasons and quickly ran as she shouted at Oumi Shuri and Saflee Opendays.

“Scatter away!! The enemy’s using a sword!! If we can distract her according to plan…!!”

She didn’t even have the time to finish her words.

Marian Slingeneyer merely used the thumb holding the sheath of the sword and easily pushed the sword’s guard.

Several millimeters alone were enough to show the true face of that blade.

She didn’t even do anything, but Oumi Shuri’s heart stopped.

Beside her, Kumokawa Maria couldn’t understand what happened.

Suddenly, Oumi Shuri went limp and collapsed on the white snow. There were no signs of bleeding or fractures. It was a state where it was believable that she could be in a coma. However, this was a -20 degrees Celsius hell. It would be obvious if she could breathe by looking at the frost coming from her mouth. Obviously, Oumi Shuri had stopped breathing. Stopped by someone.

(...Why? She’s dead…? Really, just like that, so simply!? What happened? Is it poison gas? No, we’re facing the wind here. It’s impossible to do such little actions in this situation…!!)

The sound of Marian Slingeneyer moving her fingers and sheathing the sword rang out softly.

She then raised her right hand straight and pointed the sheath like a lunge.

She didn’t say anything.

And the thing that was sealed inside the sheath, that thing filled with calamity was again about to open.

At that moment, Saflee Opendays, whose eyes were wide, slowly collapsed into the snow. Her heart stopped. She died in the actual sense. The human life, and the pride with it were all taken away so simply.

The demon of several millimeters.

The thing that could be seen between the sheath and the guard, the golden blade flashing with red light.

It was the sound of Marian Slingeneyer sheathing the sword silently.

This wasn’t at a level they could handle by simply using wits and planning. In the end, they couldn’t even get ready for battle. The sword Marian Slingeneyer had was way too destructive.

Marian went silent and pointed the sheath at Kumokawa Maria.

The sword was sheathed in, and both sides kept their distance. Strictly speaking, she wasn’t actually being pointed at, but Kumokawa Maria naturally felt that she was aimed at.

It felt like there was a lump in her throat.

It felt like a needle was pierced into her from behind and obstructed her movements.

As she faced the enemy, Kumokawa Maria finally noticed.

She finally noticed it.

What exactly had caused Oumi Shuri and Saflee Opendays’ hearts to stop.

“…Don’t tell me that sword didn't do anything.”

Marian Slingeneyer hadn’t drawn her sword. Even so, that existence continued to enter Kumokawa Maria’s body. Or rather, she tried to mutter out its true identity.

“It’s just that we felt fear. We didn’t want to stand before that golden sword before it activated its ability. In such a situation, it was a good thing that the heart stopped before something worse happened.”

This wasn’t the same type as the high level horror Kihara Enshuu used theoretically to increase its effect. It was instinct, or her soul, at work. Anyway, it was fear that was coming out from those primitive yet inexplicable places. Because of that, this was already far more than what the brain could consider.

She couldn’t dodge it.

Once she had the ability to sense the terror, that terror will erase all evidence of life.

In that case, that sword had the effect of killing all humans in the world before it was unsheathed.

Then, in that case, if, just if, that sword was unsheathed, what would happen…?

Her thumb was placed on the guard of the golden sword.

The blade in the sheath started to move like it was sliding out. She could see the edge. The sword that could make people realize that resistance would be more horrifying than death. Kumokawa Maria couldn’t do anything. That was the climax of the fear. Whether she’s to run away or close her eyes, these little actions were already sealed.

Kumokawa Maria’s consciousness was fading. She couldn’t connect the memories before and after. The scene in front of her was dyed bright red. The feeling of up and down vanished. She could feel neither hot nor cold. She just stood in a dazed manner as if everyone were as messy as a bowl of gruel.

She couldn’t be certain of what happened, but the fact that Kumokawa Maria could raise doubts showed that she was alive. It wasn’t the fear of being unable to think that caused the heart to stop. For some reason, Marian Slingeneyer’s sword didn’t move. No, in the end, she didn’t know what the sword itself did. It was just that Kumokawa Maria herself inadvertently felt fear and gave up on living.

Kumokawa Maria’s consciousness focused on the place outside the sword.

It was an even stranger phenomenon.

Because of that, her fear was weakened and slower, which allowed her to avoid death.

Then, what was it?

The reason was at some place inches from Marian Slingeneyer.

Pitch black cracks were ripped from what should be empty space.

And then, from there.

Marian Slingeneyer’s face changed for the first time as she showed an obvious anxious look. She had such a powerful sword. Even with a sword with such power, the boy’s right hand was grabbing onto Marian’s hand that was holding onto the sword. She seemed to be wary that her weapon was about to be taken as she frantically shook the hand off and pulled her distance back from the black crack drastically.

From the cracks, a boys voice could be heard.

The shaken off hand formed into a clenched fist.

“It may be too late, and it took me a lot of time to get in here. Even so, I’ve caught up to you, Gremlin. You told me the coordinates of this distorted space you created. Since I’ve caught up, I won’t let you do as you please. My right hand has the destructive power to destroy what you control.”

Something seemed to be looking over from there.

“That’s the line. Up to now, it’s all been a world managed by your rules.” 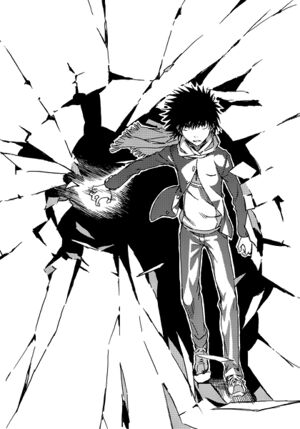 He took a step forward from the crack that had increasingly opened.

And he clearly stepped into this world.

“Now we’re going to finish things by my rules!!!”

Immediately after, all the other cracks that were embedded shattered.

It was as if everything Kumokawa Maria had witnessed up to this point was just a grand illusion.