The scientific esper powers developed by Academy City had their base in quantum theory. In quantum theory, the world was thought about at an exceedingly small level and it was a strange field in which Newtonian mechanics such as an apple falling to the earth when you let it go did not apply.

The object was definitely there, but it went somewhere else when observed by someone.

If you thought about it in the terms of the normal world of science such as in terms of drink cans or oranges, the ideas of quantum theory made no sense whatsoever. However, if you controlled the microscopic world with the observer of a human mind, the macroscopic world (that is, what could be seen with the naked eye) could be controlled. That was what Academy City's esper powers were.

However, there was another theory that was the counter to the microscopic quantum theory.

In that theory, the entire expanding universe was treated as a single large system or network and things were viewed at the largest scale that humans could manage.

This once branched off to Gaia Theory which viewed the entire Earth as a single environment or ecosystem, but the life forms on the Earth were also affected by solar winds and the gravitational pull of the moon. If you also added in the time axis and other dimensions to that large 'world', you were no longer dealing with just a single planet. In that way, many had gone back to the origins of the theory and talking in true wholes once more.

Gremlin had used Baggage City as a giant testing ground to complete the foundational theory behind esper powers that used that holism.

The theory itself was simple.

It was the opposite of the butterfly effect that said the beating of a butterfly’s wings could cause storms.

In other words, a major change on the global scale could cause flames to come from your palm.

Just saying that the large affected the small may make it a little hard to understand.

However, we are constantly undergoing changes caused by large things.

For example, take the theory of relativity.

Setting aside the precise definition, let us focus on the part that says the flow of time slows the closer an object gets to the speed of light.

So let us make the scale larger.

Now let us bring the scale up to the whole.

The universe was created in the Big Bang and is constantly expanding moment by moment. Of course, we of humanity live in the universe and are all moving at the speed of that expansion. This puts us in the relativistic time created by the Big Bang.

Now, let us go through a thought experiment.

The universe is expanding equally in every direction, but what if the expansion speed of a single local area changed?

The change in speed would create a change in time.

An exceedingly large phenomenon would change the concept of time for a tiny human.

Of course, that is merely an example.

However, if you could bend or ball up the entire universe, the side effect of that power would cause an exceedingly microscopic phenomenon that would be immeasurable even with an electron microscope.

Do you think that if someone had power great enough to alter the expansion speed of the universe, they should just use that power to directly crush the planet or the galaxy?

However, a holistic esper would only notice the flames coming from their palm. Even if some distant galaxy was crushed in the process, that would be all they could comprehend. Just like how a person in a car cannot notice that someone standing on the Earth is in a different time.

As such, an esper created from the whole might only reach a Level 2 or 3 on Academy City’s scale. Even if some truly ridiculous thing was occurring in reality, no one would notice it, so it might as well not have been happening. Ironically, this was the same as the concept of zero in quantum theory.

What Gremlin had been doing was the first step toward that.

Before actually creating a holistic esper, they were carrying out an experiment to see if a small supernatural phenomenon would occur when the world was greatly distorted.

The tournament in Baggage City, the clash between Kihara and Gremlin, and the war between science and magic. Each of those movements was nothing more than an experiment to see if the exceedingly large scale battles would cause exceedingly microscopic changes.

For Gremlin, the 'punishment' sent by Academy City was just another part of their plan. Kihara Kagun was from Academy City and had been a central part of their darkness. He had secretly intercepted the scope of the unit sent in by Academy City. With that knowledge, he had carried out final adjustments to give Gremlin the advantage.

That scenario had been hidden even from Gremlin. If they had known the scenario beforehand, they could not achieve the same results.

It was all an experiment to develop esper powers from the result of the battles.

If they succeeded, it would not only be the most powerful, it would be a brand new system of powers.

The type of experiment was the same as what the #1 had once gone through. Since that was the result he had eventually come up with, Kihara Kagun may have never truly escaped the curse of the science of Academy City’s dark side no matter how much he hated it.

(But then, when he found out Kihara Byouri would be part of the strategy, he took advantage of the fact that he could not tell anyone else the scenario and made a major change to the plan at the last second.)

If the small phenomenon caused by the major distortion was detected, they would finally alter a hopeful candidate’s brain to develop an actual holistic esper.

So what was the result?

The result was clear.

Since Kamijou Touma’s right hand had negated something, something needing to be negated must have been there.

Let us take Kamijou and the other’s proper 'present' as 0 and the 'future' created by the holistic experiment as 1.

Gremlin surely thought they were controlling a holistic experiment. Until partway through, that was true. Gremlin’s major preparations in Baggage City had indeed created a result in their experiment to show that a distortion that should not exist leads to esper powers.

However, when the small distortion had appeared, Gremlin and Baggage City which were in the 'present' had begun to be forcibly drawn in by the holistic result in the 'future'. It was like scientists losing control of the black hole they had created.

And so things became distorted.

If the 'present' was 0 and the 'future' was 1, then, until Kamijou had arrived, Baggage City (which should have been a 0) had been drawn in and the time and space had been distorted toward the future making it a 0.5 or a 0.7.

That was why something had been off about the place in which Kihara and Gremlin clashed despite the fact that it should have been Baggage City. 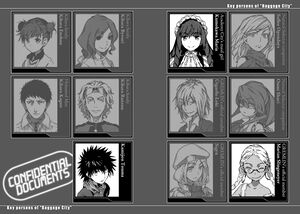 The normal laws did not apply and they began to be bound by some strange laws that made tragedies occur much more easily.

At the same time, what did it mean that that distortion had been destroyed by the power of that right hand?

The answer was simple.

The cold laws that had taken effect no longer applied.

Kamijou Touma’s right hand would do the conquering now.