Even when she was on the ground, Kumokawa Maria could see the storm.

The monsters were fighting in a blood fest in the middle of the plant factory containers that had been severed and crushed into rubble. This was obviously different from the normal concept of winning or losing. Defense was non-existent, and just like the words implied, they were killing each other. It was this kind of battle. They were beating, crushing, piercing, slicing, ripping and gnawing at each other. This battle had all sorts of destructive acts, and both of them continued to fight to the death as they fell to the ground.

Kumokawa Maria called out one of the names.

But that man never responded.

A terrifying explosive sound rang, and the two people in the air changed. On one side…it looked like a human woman was devoured by a dinosaur. The silhouette of this monster suddenly slipped, and her body continued to crash down the pile of containers before falling over to where Kumokawa Maria was.

The dinosaur that collapsed on the snow seemed to be saying something.

"What's… going on…? No, I didn't need to kill him. To think that someone who was suitable for making him give up was actually right… right here…"

That long-necked dragon-like thing was staring at Kumokawa Maria. Its mouth that had neat rows of large, human-like teeth was opened.

At this moment, she thought of it.

What she had experienced before.

It was the same feeling as when she saw that person wielding the knife near the elementary school gate, when she was glared at.

However, the weapon this time wouldn’t attack Kumokawa Maria.

As if trying to use his right hand to stab into the head of the dinosaur, that man collapsed from the pile of containers.

That man lost his left arm, his upper body was stained with blood, and his skin wasn’t intact.

That man used his own method to ruin his own personality.

It was a mystery what skill was used, as the remaining right arm, from the hand to the elbow, was stabbed into the dinosaur’s head. And then, a decisive blow was given. The dinosaur continued to shriek, but midway through, it lost all its strength. The body looked like it was tossed out as it then stopped completely. The color of the skin became transparent, and then it started to dissolve into the snow.

That man continued to shake the dinosaur’s head and threw it over at the snow. He could dodge all the fatal injuries, but the loss of blood was about to kill him. Perhaps this was what he had intended, considering the position of the wounds.

Kumokawa Maria ran over and called that man, but not by his name. He collapsed on the ground and used his unfocused eyes to look over at the source of the voice. But to the man, it was unknown whether he knew her or not. Most likely, he lost all his memories before and after that incident. He wondered where he was. As he thought about it, he lost his ability to think about anything else.

The man seemed to see a different person as he looked up at Kumokawa Maria’s face.

He lost his strength in his body, but his lips continued to tremble.

Immediately after that, the man couldn’t move.

This man had most likely bet his entire existence just to say those words.

It probably took him a long time to say these words. He was always pained by it, but now he could finally gain release.

He gave up everything.

He continued to torture himself even at his limits.

The man was gradually being buried by the -20 degrees Celsius of flying snow. Realizing this, she finally spoke.

In that world where even tears could freeze quickly, Kumokawa Maria bent down slightly.

Her voice became a cry. She shouted out everything that she had kept inside her.

“I knew because I kept looking into it!! You did lots of things to help us, and even left secretly to prevent us from becoming murderers, Sensei!! You’ve been bothered by this all the time, about who had set up that murderer!! Sensei, are... are you going to apologize to us now!?”

There was no response.

Not even a nod.

The face that was covered by the white snow only showed the smile of a victor.

“But I know things that you don’t know either, Sensei!! Those lives you saved are walking down different paths!! Everyone is grateful to you!! Everyone is worried about you! It wasn’t futile! We don’t know how much you hate yourself, sensei, but this isn’t futile at all!!”

That smile, that silhouette, gradually vanished.

This merciless sky of flying snow dyed a layer of white over that immobilized person.

“Damn it, don’t die with a satisfied look!! I’ll beat you up!! I’ll beat you to death if it will wake you up!!! Besides, I hate people like you the most!! That’s why you have to give it your all!! But, why…why must you just simply die like that!!”

But the outcome couldn’t be changed.

In this world—and because it was this world—Kihara Kagun made a decision, and Kumokawa Maria was still alive in this world.

It wasn’t a waste to exchange his life for those who chose to give their lives up.

All the Kiharas who had swept through Baggage City were stopped.

However, there was the presence of another organization in this city.

Seemingly hopping on one leg as she moved about, Marian Slingeneyer, who had a messy-looking bandage on her eye, stood on the plant factory, and stared coldly at the scene below. From their words, she knew that Kihara Kagun, no, Bersi was truly dead. Having accepted that fact, Marian stumbled and leaned on the wall of the container.

After hearing that muttering, the people near Bersi turned around. However, Marian Slingeneyer didn’t care. No matter how hostile the others looked, what she could only see was that man that was being buried by snow.

“Why... why did you think that you wouldn’t die? Or rather, I taught you my skills to prevent that from happening. Why… why is this? It… it’s like your death perfectly completed the puzzle!!”

Perhaps such wavering was completely unexpected for her.

For the Gremlin magician who was able to modify live humans and turn them into her own weapons.

But that wasn’t all.

She could do lots of inhumane things to many people, but to put it simply, that was to clearly define who were her friends or foes. She could help her enemies, she could betray her friends, but those vague things had nothing to do with this. Marian Slingeneyer was the sort of person who would wreck the entire world for the sake of those she recognized as her allies.

Even when she faced this directly, she couldn’t accept it.

The place that should have been empty suddenly rang out.

The smartphone Marian Slingeneyer was holding onto rang. Even though she didn’t pick it up, it switched to a magic message.

The name of the main god in Norse mythology. The voice of Gremlin’s Magic God arrived.

“You can’t do that, Marian! You’re using too much force! The experiments up until now will crumble if you keep this up!!”

She said that with a vengeful tone, ignoring the Magic God.

“If I had used my strength in the beginning, this wouldn’t have happened. If a Magic God like you appeared in this world, Bersi wouldn’t have died. And so would I.”

“Of course I’m going to. Don’t I have to use it? It’s too late to do anything, so let’s just back away like this and end everything!! So what about the experiments? So what about Gremlin? So what about a Magic God!? Ah!? How can I swallow this without killing off everyone in Baggage City that killed Bersssssiiiiiiiiiiiiiiiii!!!”

Marian Slingeneyer roared as she reached for her overalls.

She didn’t draw out the golden tool.

She drew out a sheathed sword. 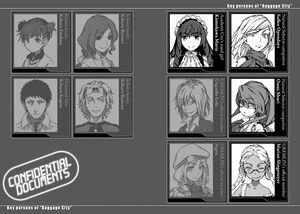 In the Norse mythology, it was one of the signs of the final war, Ragnarök. It was a legendary magic sword where humanity could start a war to continue Ragnarök and continue to bring the greatest devastation by swinging it.

The creator knew more than anyone how terrifying it was, hence its name. But at this moment, she grabbed the scabbard of the sword without hesitation.

She held onto it hard, and shouted.

“This is his funeral. Your skulls and millions more will become Bersi's grave!!”