There were a lot of areas where access was forbidden in Baggage City, and this was one of such places. The room seemed to balance the development costs to all the areas that could be accessed. The top floor of the high-rise hotel was a throne, but that was an obvious disguise. Most of the masterminds would be gathered in the underground facility far away from there.

Weissland Strainikov deliberately used this dummy facility that could be easily attacked, or maybe it was just a stance.

He had no right to say any kind words, but either way, he couldn’t allow for ordinary citizens to be sacrificed under unnecessary conditions. Although this would be an ironic place for Weissland to be in as it runs the risk of him being attacked and cause civilian casualties, but it wasn’t what he was focusing on.

What he wanted to avoid was simply unnecessary bloodshed.

Thus, if there was a need, the old man called Weissland would not hesitate. Furthermore, he believed that spreading this concept to people everywhere was a form of redemption.

The caretaker of Baggage City.

The 27 companies of the Anti-Academy City Science Guardians were gathered into three groups, and he was one of the leaders of those groups.

He was in charge of its food source, whether it was purely about finances, biofuels or microbiology. This was the "large old man" who used to support Academy City, but had now became a pillar of the resistance against Academy City.

“…I’m often mistook for being a person of catastrophic ideals, but I’m just someone who hopes to avoid tragedies,” said Weissland, as he sat on the soft chair in front of a large ebony table.

The outside was a landscape infamous as a blizzard zone. The snowy white scene extended beyond the horizon, but there was a soothing heated air that warmed the room isolated by thick glass.

“But everyone in the world wishes for happiness, yet turn on each other, creating clear losers in the end. It’s like the currently proceeding Natural Selector. As for what we should do in this situation, I suppose it’s necessary to think that a tragedy may occur.”

“There’s nothing that could be taken for added proof if we consider avoiding tragedy as our priority. Are you able to use something like a black box to bet on this?”

A blond, frivolous looking man was sitting on the ebony table. He was wearing a suit, and had a complete 180-degree different impression than the old man.

Or rather, the blond man’s happy-go-lucky attitude with regards to everything in the world showed his principles.

One of the official members of the magic society Gremlin that had been sent over.

“The Anti-Academy City Science Guardians have tremendous power, whether it’s purely on a technological level or the unmanned weapons that were borrowed from there. But can those guys use these things properly? Turning the technology existing in your minds into weapons, developing them, mass producing them, live testing them and letting the soldiers read the operation manuals—these will all take time. Even if it’s unmanned weapons, I doubt you can use them to their utmost capacity without Academy City’s support. Even if you can power these weapons, standing in one spot or toddling is the extent of your ability, right? The same is true of the Natural Selector this time,” Útgarða-Loki added without any sense of tension.

That’s right. To discover a "certain existence" that could go against Academy City’s espers, analyze them accurately, and create a large-scale system…these would take time.

Weissland seemed to agree with that.

“Of course, Academy City won’t allow us time. There could be a swift attack if they decided to do so.”

“Academy City had entrusted them to their cooperative organizations.”

In a certain sense, it was an existence that was even more valuable.

A weapon that obviously went against international laws.

“The military clones of the #3 esper, is it? If we had succeeded in the capture of one of them, the situation would have probably differed.”

“But the ten thousand individual units disappeared with perfect timing. Small fires broke out from the places where they lived…and it seemed that they prepared some camouflaged DNA map processes with multiple records from the data archives that had been destroyed through electronic means.”

“…Most likely, someone used the girls' network to relay tactics. There’s no concrete evidence and the data’s gone. We can’t research on our own, and if we try to reveal the crime of creating these clones, it would end up being discarded as just some ‘stereotypical urban legend’.”

“Even so, Academy City won’t relax so simply.”

“…That’s why we’re contacting you guys to repair this. We’re the same as you, Gremlin, in the sense of breaking the unipolar centralized system of Academy City.”

“We just don’t intend to be shields in a human wave tactic.”

“I hadn’t placed my hopes on that anyway. Or rather, we’re grateful that you didn’t do anything about it. If you don't act, the enemy will suspect us.”

Weissland arranged the reports on the table in a fan shape like he was laying playing cards, and said, “And the more careful they are, the more time they will try to grasp information before attacking. It’s what we call buying time. If we can gain some time, we can make sure that we’re ready for battle. For this reason, whether Gremlin or the Natural Selector, if we can transport a large number of containers through air or transport intelligence over, it would be part of the job.”

“Are you able to reach a level where you can fight them?”

“Academy City has unimaginable technology and the ability to rationalize skills. They lack resources, though. We, the Anti-Academy City Science Guardians, must spread the news that we have a chance of winning and get the world thoroughly involved…and letting them run out of resources and food is the best way to prevent war from continuing.”

“Unsubstantial and fictional information operations?” Útgarða-Loki smiled happily. “What I liked was developing. That’s why I came here.”

“I’m doing that, but it isn’t what I’m looking forward to. I hate formless number battles. If we increase the prices of food, the people left in reality will starve.”

“That pile of papers there is part of it, right? If it’s memory installation that the science side specializes in, wouldn’t a stamp-sized flash memory be enough?”

“That’s just a countermeasure for security’s sake. However, it’d be meaningless in the end if people other than I don’t agree with it.”

Weissland’s notebook was placed on the table, but it seemed that only the necessary information and the registration numbers were there.

It was obviously inefficient, but it may have been his detailed plan to save hungry people somewhere by wasting paper resources.

It was like making the wind blow at the exact strength to make a bucket-maker profitable.

But the image that appeared in Útgarða-Loki's mind made him smile frivolously.

“I’m also involved with people's lives and death, but I’m not obsessed with life and death more than you. No matter what, if we decide to use corn to operate vehicles, several countries will end up starving. But on the other hand, if we give it up, other countries will starve because of financial difficulties.”

“Hm. Even when facing such a complicated demise, can you truly have the sense of accomplishment of saving others? To be honest, I don’t understand such a world.”

“It’s not some long-lived experience you can understand from asking me. It’s not something worth learning either.”

The reality was that mothers were unable to feed their deathly-thin children as their breast milk dried up and the wastage of carbohydrates continued while they were praising the earth and activating machines. To the two old men who had an acute knowledge of them, there was a deep darkness that even Gremlin couldn’t step in.

And then, even in the deep darkness, there were blatant bright spots.

“I’m just searching for a means to use the necessary materials fairly in order to survive. I asked Academy City for help before, and now, I have to ask others. If you knew how many people are dying every single minute on this planet, you would understand that we shouldn’t be wasting our time.” 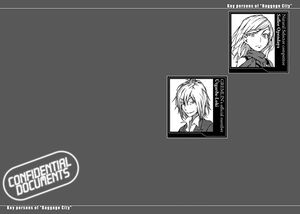 “That’s enough. I’m about the same level too.”

“If we can harm Academy City, it doesn’t matter what we do.”

“…I just feel that you guys aren't simply taking action based on a simple ideal. Well, are we making use of each other?”

Just as Weissland had muttered, his notebook displayed a new window.

The old man frowned and said, “It looks like the time for us to take action has arrived.”

“What are the specifics?”

“You’re to eliminate the intruders.”