The person had her hair tied in locks and was dressed up as a maid. However, it wasn’t the get-up of someone working in an old French-style city, but the get-up of a maid on a certain electronics street, giving out leaflets that were poorly designed and had a fluorescent yellow based color. The mini-skirt, the frills, the black corset and the psychedelic outfit that broke historical tradition were extremely abnormal.

However, what was more ridiculous than this get-up was the way that person showed up.

Directly under the militaristic man.

The girl that crouched her body seemed to have gotten under the opponent’s feet as she launched a sudden attack on Oumi Shuri.

With a stiff sound, the girl’s hands grabbed Oumi Shuri’s garden shovel kunai. The girl in maid clothing showed a smile and whispered to her.

“That’s enough of a commotion. If you want to say that killing him is the only way to survive, then I’ll just take you out right here.”

Immediately after, the girl used her hands to grab Oumi Shuri’s kunai and her leg was suddenly extended out to the ceiling. It wasn’t aimed at the face of the man in military attire. The inside of the slender leg of the girl curled and held itself around his wrist that was holding the dagger like a handcuff.

The girl then spun.

Her other leg on the ground kicked off hard. With Oumi Shuri’s kunai as the axis, her legs spun like bamboo dragonflies. The pain that came with her wrist being grabbed caused Oumi Shuri to let go of the kunai. The maid then spun again while using her hand to grab onto the inside of the military-dressed man’s knee. Suddenly, the girl’s head was now higher than the man’s position. She then used the knee of the leg she used to leap up to slam hard into the man’s jaw.

The knee was buried into the man’s face, and the girl moved it outwards before using the other knee that was holding down the opponent’s wrist to press down on the man’s shoulder. She didn’t care that she was wearing a skirt and pressed her entire weight down. She had positioned herself where she could restrain the man’s head with her thighs, causing the man to fall back like that.

The girl who sat on the man checked that her butt and the floor pancaked the target and made him lose consciousness. She stood up and used both hands to toy with the dagger and the kunai. 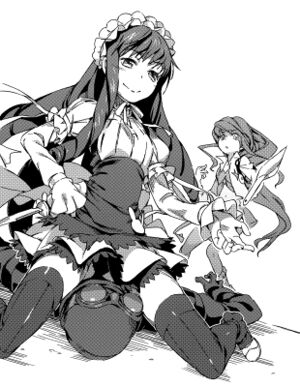 “…Um. Did I give too much service? Though I deliberately used such shameful actions to hurt my pride a little bit, but that made my defeated opponent gain something out of it…Honestly, my talent’s really troubling me.”

As she watched the girl mutter, Oumi Shuri cautiously put her hands behind her back.

On first look, it seemed that she was using a tricky fighting technique of using her arms to run forward before lashing out with her legs. However, this alone wouldn’t be enough to explain her actions. Everyone knew that Kouga ninja skills were rationalized through logical circumstances. Thus, she knew that it was impossible to do that action using a human body’s muscles. No matter how she thought about it, there were a lot of paradoxes to it, but this person still charged right towards her goal in such a stance.

It was obviously a supernatural power.

This was a person who used something Oumi Shuri wanted.

The girl dressed in the strange maid outfit clearly introduced herself.

“I’m from Academy City, but don’t worry. I have no relation to those people who attacked this city. I’m not a participant of Natural Selector, but our goal is the same. Like you, I’m here to watch battles between monsters. But in the first place, I’m just simply looking for someone.”

Even though she said that, their levels of resolve were far different.

Oumi Shuri, who systematically joined Natural Selector to safely obtain information about supernatural powers, and Kumokawa Maria, who snuck in even knowing that she would end up in a fierce fight with the Anti-Academy City Science Guardians.

To be honest, if Oumi Shuri had known that it would be this dangerous, she probably would have changed her plans.

Either way, it would be bothersome if her aims were known by others.

Oumi Shuri started gathering strength in the hand behind her back, but then Kumokawa Maria called her out to stop her.

“Stop it. Using a red pepper water gun won’t be able to hurt my eyes. If you want to hurt my pride, you better bring along a flamethrower.”

“I do have steamed yellow mustard and fresh green wasabi.”

“Ah—...Forget about the peppers. There’s a risk that I could lose my vision with wasabi. Speaking of which, those don’t have the JIS mark, right?” Kumokawa Maria moved the conversation ahead. “Even if we fight, you’ll be the loser. If you’re fine with that, be my guest, but whenever possible, I try to avoid meaningless battles. It’s not an interesting experience to kill off a life I barely managed to save. To be honest, my carefully maintained and slightly hurt pride may just snap.”

“Why…why are you so confident…?”

“I don’t think I would lose to an opponent that could only use both hands to fight when I use all four limbs. My hands can be used for walking, and I can use my right hand and right leg to jump pretty far, you know? Would you like some time to work out how many dozens of times the difference is between us?”

Oumi Shuri thought about that.

“So you saw through it? It’s true I can't jump far like that, but it’s possible for me to use my right hand and right foot to throw or twist. I can use my right leg for kendo and my left leg to throw a javelin. When I used my feet to wield a bamboo sword, the professionals got furious though. But I've never lost.”

Oumi Shuri tried to draw out the water gun of liquid red pepper that was hidden under her skirt and quickly fire it. Immediately after, Kumokawa Maria’s head moved 180 degrees to where her knee had just been. She didn’t care that what was under her skirt was exposed as she lifted a leg towards the ceiling to maintain her balance before using her right hand and leg to stand.

“This not only increases my ways to attack, it even drastically changes where my vitals are. Against someone like you with combat skills trained specifically towards fighting opponents who stand on two legs, I have an incredible advantage.”

Kumokawa gently spun around like a ballet dancer. Her head and limbs returned back to position too.

“Originally, I would have attacked out of the blue using my hand to grab onto your foot, and then my foot will slam onto your head. Just now was a trial period so it doesn't count, but I suppose free service time is over?”

However, Oumi Shuri realized that her skill wasn’t perfect.

No matter whether it was a hit, a grappling move, or a throw, the power would be closely related to the enemy’s mass. Tricky movements would just be in the way of the shifting of body weight, but it appears Kumokawa Maria used unique spinning movements to increase her power.

Or rather, it was a supernatural power that couldn’t be explained from before.

Oumi Shuri reached a hand out, and Kumokawa Maria tossed the confiscated gardening trowel-type kunai back at her. Oumi Shuri had her weapon back and started to reevaluate the situation.

Right now, what she should do wasn’t to seek victory just to prove her existence.

But to obtain the “treasure” known as the supernatural power to build a bridge leading to victory.

And to elevate the entire Kouga to that level.

Thus, even if she was looked down on, she shouldn’t feel hurt. Or rather, the stubborn insistence on the meaningless victory and benefit and getting beaten without leaving anything behind would be even more senseless.

“What do you intend to do?” Kumokawa Maria said to the pondering Oumi Shuri.

“The corner. I’m asking you if you intend to peep there.”

Right now, at the other side of the corner, it seemed that the storm between the Kiharas and Gremlin continued. It was a battle between humans who were using knowledge that surpassed humanity to their fullest, something the Kouga has longed for.

It already took all of her strength just to spy on them.

She would definitely die if she became involved.

She may not even have time to distinguish between the two, and would be devoured immediately if she challenged them.

Even in that sort of situation, Oumi Shuri answered.

Due to the thorough modification of her physical body, the girl who looked ten years old was the elite who had the role of the Pioneer. Those eyes showed the light of her existence that would not be extinguished no matter what damage happened to her body.

“I must obtain the stepping stone that will revitalize the Kouga. It doesn’t matter even if Natural Selector can’t continue. If this is something one must do, then as long as I come forward, it means others will not need stepping into such a threat in the future. I must go no matter what.”

She shook her head from side to side. 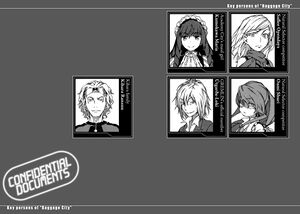 “I guess there’s no choice. I’ll hurt my pride to protect your life.”

There was no more time for questions.

Immediately after, Kumokawa Maria landed on four limbs and leaped over in a puzzling manner. Oumi Shuri lost consciousness.