Kihara Byouri was tilted to the side.

The multiple legs created from the wheelchair’s wheels had been bent from powerful blows and were no longer functioning properly. A few guns and wires were sticking out of the back, but none of them looked functioning either.

Her opponent had simply been too much.

Marian Slingeneyer, a Gremlin magician, had completely controlled the battlefield with her gold saw and hammer. She had cornered Kihara Byouri in the garbage disposal facility’s burnable garbage area. The area contained what looked like a large pool made of steel that was used to temporarily hold the garbage to be incinerated.

Wood, paper, and even bones too large for compost were dried out and then all burned together. The horrible smell stabbed at their noses. The extent of what qualified as burnable garbage was expanded due to the snowy Baggage City wishing for heat.

Kihara Byouri was stopped at the edge of that steel pool and Marian Slingeneyer was spinning her hammer around in her hand.

“Looks like this is the limit. I still have to deal with the other Kiharas, so I’ll just be modifying you into something useful as quickly as possible.”

“Don’t worry though. My modifications will actually be an improvement. Since you’re in that wheelchair, how about I give you eight or ten legs? Hell, I could even make them rotate like a helicopter rotor.”

“I would like to make one thing clear. I see no reason why I need to surrender just yet.”

“Yes, you probably do have some weapons left, but look at your wheelchair. It’s broken. How are you supposed to fight if you can’t move around?”

With a dull clicking noise, the Kihara Byouri’s pajama pants ripped open. Instead of the soft bare legs of a woman, a plastic machine spreading from the back of her knees and covering the entirety of her legs was below. It looked less like armor and more like ribbons wrapped around her legs.

With the sound of a motor coming from the back of her knees, Kihara Byouri smoothly stood up.

Marian clicked her tongue and said, “So even not being able to walk was a lie.”

“I’ve already given up on so much, so I really wanted to avoid having to stand up on my own.”

“Are those powered casts for hospital patients? Didn’t a car company make those? I think it used the technology from a dancing robot. I saw it in a commercial.”

“That was merely what could be created with the technology outside of Academy City. In fact, it would probably be a bad idea to give a hospital patient something with the strength to kick a tiger to death.” With a painful noise, Kihara Byouri pulled a machete-like blade from the back of the wheelchair. “But you have gone through most of your ‘weapons’ in order to corner me. In fact, you’re out of ammo. You have no more people to alter in order carry out your tricky strategies. Even that saw sliding technique seemed to require fat and oils that were quite fresh from a human body. For that reason, it does not seem you will be that much of a threat anymore, so how about you give up?”

Marian Slingeneyer looked down at the saw and hammer she held and then sighed.

All she had were tools. They were not weapons. They could of course be used to kill and do other horrible things, but their full ability could not be used in that way.

The flesh-colored remains scattered about had been too far destroyed from their base form to be turned into anything else.

Also, Marian’s territory as a Dvergr was living bodies.

Manipulating the dead was the territory of the gods or the giants.

She could only use the blood and fat that left the human body for the dozen or so seconds until they “died”.

“This is a problem. I doubt I can win in a fistfight. Also, aren’t you going a bit far with the transformations?”

“It’s a part of Japanese culture. Also, those who are hated must put in more effort and skill than those who are popular to survive this far. Humans grow the most when they stand up to difficulties.”

“It is a shame how people hate the strongest and most skilled.”

“It really is. Thanks to that, I have given up on so many things. But I have also made others give up on just as many things, so I do not especially hold it against the world.”

Kihara Byouri took a step and then another.

She approached. Stepping on the flesh-colored remains scattered across the floor, Marian Slingeneyer took a few steps back, but she would never escape. With the machine assistance, it would not be difficult for Kihara Byouri to charge forward at speeds greater than a lion or tiger if she tried.

“How about you give up?”

“Then you hope to resist to the very end? I will crush that hope with everything I have, so give up.”

“Then I’ll take you up on that offer.”

Marian Slingeneyer used her heel to kick up something lying at her feet. Similar to a fairly tricky way of juggling a soccer ball, the small device arced over her head from the back and she caught it in one hand.

The device had been held by one of the flesh-colored objects on the floor.

It was a radio used by the dark side combat unit the Kiharas had control of.

“Ahh, ahh. A target member of Gremlin is cornered down here in the underground garbage disposal facility. Requesting immediate concentrated fire from any nearby units.”

She purposefully called in the enemy.

However, Marian Slingeneyer did not even view them as enemies. At their low level, they were no more than materials for her weapons.

“Now, how many of your excellent subordinates will come running? And the better they are, the sooner they’ll get here.” Marian tossed aside the radio and adjusted her grip on the gold hammer and saw. “Also, these soldiers are under the command of such a scary boss. If they screw up, they probably get harshly punished. After being trained under such frightening circumstances, they will probably rush here as quickly as they can.”

But the quick arrival of her well-trained subordinates worked against her.

Kihara Byouri’s blade only made it within three centimeters of Marian Slingeneyer’s throat.

The Dvergr had swung her gold axe and the soldier who had the misfortune to arrive first had his right arm grow to over twice its normal size. On Marian’s command, he grabbed a fire extinguisher like a one-time-use pitching machine, wound up his arm enough to damage his body, and “fired” it with enough force to further injure himself.

With a dull noise, Kihara Byouri’s body flew through the air and landed in the middle of the garbage disposal pool.

“Hoo, now they’re all dead,” muttered Marian Slingeneyer as she returned her gold tools into her overalls.

With all the enemies in the area gone, she finally started feeling the damage signals—that is, pain—being sent from throughout her body. She staggered and brought a hand to the wall. While she continued to support herself on the wall, she slowly walked down the passageway.

Her primary objective had been to protect the heating facilities, so she did not leave the garbage disposal facility. Surprisingly, the living spaces for workers were not all that bad. She had remodeled one of those rooms into a hotel for herself.

It had originally been protected by a magical barrier, but the attack by the Kiharas and Academy City had caused a lot of damage to the construction of the building itself. The arrangement of the “signals” had been forcibly thrown out of order and the barrier had ceased to function.

It seemed the situation was not going to improve if she simply did what the Anti-Academy City Science Guardians told her to. The scale of their ideas was simply too small. In that way, they had lost to Academy City from the very beginning. 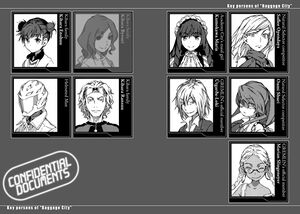 And so she decided to take matters into her own hands.

For that reason, she did not need to worry about a small barrier that only covered a single room.

She had to acquire some higher level tools.

She opened the lid of a wooden box in the corner of the room and started to stick her hand inside but then stopped. She pulled a giant pair of pliers-like tongs out of her overalls and used them to grab the spiritual item.

The edge of the wooden box was severed from the side she pulled it out from.

“I’d rather they did not shake things up any more, so I think it’s time I gave a counterattack.”