"Whew, damn it. I should have brought along pure fighter-types even if it adds on to the burden of the plan. This really doesn't suit my style."

Having returned to the waste treatment facility, Marian entered a personal room that had its magic barrier destroyed. Even if it was Loki's Net, the outcome wasn't guaranteed. She had to take out her secret weapon to deal with such a chaotic battlefield.

Marian sat on the chair in the room, and grabbed the transparent bottle on the table. It was a juice that was made from malt. This beverage may have been rather rare among the Japanese, but the Norse magician liked it. While beer was easier to get and fit her identity well, it also made her sick, which is why she never drank alcohol.

She took a direct gulp of malt juice from the bottle, and then whipped out her smartphone. What she actually needed wasn't a communication device, but to adjust her mouth and ears to receive signals. Turning one's own voice into electronic signals and processing it uniquely would have the use of encrypting it completely. Because of this, Marian deliberately used the technology of the enemy, the science side, to communicate.

"Sigyn, where are you right now?"

"Whatever. Can you hurry up and meet up with me? I repeated so many times that I'm not a fighting-type personnel anymore. Besides, what do you want me to do here? Isn't there someone more useful like Mjölnir or something?"

"It's busy over there. We can't add to their troubles. You know that."

"So I say, where is this place? I can't do anything if there's nobody else around. I'm the same as you here, Marian. You can't modify your own body, right? It's the same with me."

"Your ability is suggestion and my ability is modification, you mean?"

Sigyn was the name of the wife of the evil god Loki. This magician, who was entitled with the name Sigyn, had given a suggestion that was ambiguously magic. Thus, it was a mystery whether she was a magician or not. But that didn't matter. Gremlin was just a kind of existence that would squeeze something dry once it had value and continued to expand like that.

From the Norse god's name that was given, one could tell that both Sigyn and Útgarða-Loki were official members of Gremlin.

"…You really don't know how to use it. You're an existence that's able to give a suggestion 100% accurately. If you could use your power on yourself, maybe you could even reach the realm of being a Magic God."

"Whatever. If my suggestion can make anyone succeed, it'll be my success anyway."

"Hurry up and suggest."

Both Marian and Sigyn weren't the type that could succeed on their own. But once they helped others, they would create a large fighting force and even end up being able to rewrite history. They didn't know how many of the Kiharas were left, but if Sigyn gave a suggestion, it would have made up for Marian Slingeneyer's flaw…her skill in direct combat, and she wouldn't end up in a tough battle with Kihara Byouri. Though there was a need to suggest according to the situation, but with such a premise, they would have sent the Kiharas to their graves with overwhelming force.

To meet up with her ally who was also lost, Marian Slingeneyer got a suggestion to the searching skill.

However, at that moment, Sigyn said, "It's tough, isn't it?"

"There's obviously some misses with the assignments. I'm so tired. I even thought of calling Bersi."

Marian leaned her body on the back of the chair which felt good, and then shook her legs under the table. The mouth that contained the malt juice continued.

"So basically, Natural Selector? It's a mistake to mobilize us just to defend this tournament. The cost won't be worth it. I'm really lacking in motivation."

"Ahh. Establishment of a global standard for the replacement of Academy City's espers…was just a lie, wasn't it?"

But Marian Slingeneyer was very matter-of-fact.

"As for the old men who have already become minced meat, the objective was like that. The moment the participants indicated that they wanted to take part in the Natural Selector tournament, one could recognize the objective of the participants that took part. There are all sorts of reasons; whether it's because of sick family members or a research team defending themselves in an argument in school, or whether it's to introduce funds to their hometown where people were starving. Anyway, once they get recognized by the world, one can tell what they actually want."

All the participants had a reason they couldn't back away.

Also, those reasons wouldn't disappear even if they lost in the tournament.

On the contrary, they would stay.

And then, they would merely be digested and cleaned off in a place nobody knew about, as the things they definitely didn't want to lose crumbled in the hell in front of them.

"Because of that, they could blackmail and control what the participants do. The organizer would give full support and assistance to the winner of Natural Selector. And to those who suffered defeat, they would raise suggestions like 'if you disappear like a loser, your personal motives will lose. So what will you do?' and things like that before giving them the ring of a revived defeatist."

In other words, it would be the complete opposite of the revealed reason.

It wasn't to let a large number of people fight it out and choose the strongest amongst them.

Whether it was a victory or defeat in the tournament, everyone couldn't get away from it. Whether it was assistance or threats, they just needed to use all sorts of means to make all the participants become Anti-Academy City Science Guardians and make them unable to escape.

UFOs, dinosaurs, Out-Of-Place Artifacts, electromagnetic waves, microbiology, UMAs, underground humans…these people that researched on the overly ridiculous existences in this world all had their own sources of funds. In other words, the power of reality.

This martial arts tournament was held to gather such power in their hands.

"What the Anti-Academy City Science Guardians wanted wasn't the over-one-hundred participants, but the strength of the over-one-hundred organizations supporting them from behind. They just wanted to get them and expand their power, increase their range of control and try to fight against Academy City. This Natural Selector held for some natural selection was basically just something created out of the desire to expand."

"It's because of that that we can mix in our own objectives."

"That's right. That's kind of our final redemption. In fact, we're just increasing the pressure after all."

Marian sighed and remained in her sitting passion as she pushed her chair back under the table.

"Really, these healing goods really helped me out. Without them, I would surely snap. It's most important to satisfy my inner heart after all, especially for intelligent professionals like us."

"Let me make a suggestion about that bad taste of yours."

"Your interest is unpleasant. Dissecting living people and making them into the shape of furniture? I never want to be invited to your tea party."

"You think so?" Marian Slingeneyer tilted her head without showing much emotion.

While stroking the flesh-colored high-class furniture to her fingers, Marian smiled.

"I'll only make one that suits the purpose best. This is punishment for them. Humans only have one life; it's unfair to kill all of them if they sin to a certain extent. In that case, why not just kill a hundred people instead of one? Wouldn't it be even more worth it? I turned them into furniture to make them atone for crimes committed… Well, I modified them into healing goods, so I can't deny it when you say that I added a little of my interests into it."

"It worries me if Útgarða-Loki became one of them."

"I'm a little pissed he ended up like that due to his carelessness. Well, there's no need for me to go to such an extent, right? It's not like he managed to hurt us because he betrayed us. Spirits won't attack hardworking and upright people, you know?"

Sigyn could use the ever-powerful suggestion, but a suggestion was merely a suggestion. Even she didn't know how to use it or even whether it could be used.

"Anyway, you're our secret weapon, Sigyn, so don't go about on your own. Even I intend to fight with your assistance. If something happens to you, the entire power balance will change drastically."

And then Marian Slingeneyer stopped talking. 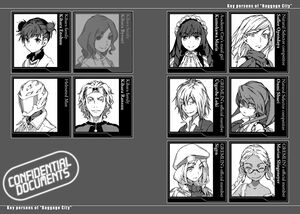 "…But why must there be tragic victims that appear here all of a sudden? My voice has been encrypted via the communication device, but my real voice is different."

Still sitting on the chair, Marian threw the malt juice bottle at the door. With the sound of the glass shattering, the ajar door was wide open.

Standing there were Kumokawa Maria and Oumi Shuri.

Marian Slingeneyer continued to play with the golden saw she took out from her overalls.

"I've been wanting a footrest and a small fridge for drinks. Which one wants to be which?"