The one who muttered that in such a naïve tone was Kihara Enshuu. Her clothing was completely wet with snow and mud. What she saw was a complex image that was received from the smartphone on her head and the 1seg TV in her hands that showed the reflection of the walls of the buildings off the windows.

"Yeah, yeah, there's not enough damage, but things are proceeding smoothly. Sorry, Amata-ojisan. These words sound like where the Amatas are is safe."

She was currently in a large residential area. The rectangular buildings were all arranged in rows like books on the shelves of a library. Most likely, it was because of the auto-lock that the passage didn't feel like the veranda of the outside of a building, but was designed more like something that was built through the building.

However, it was just that.

With a thick and heavy bladed snowplow, she could destroy the gate's auto-lock. All the rooms would be weaker than the auto-locks. Thus, they could break the deadlock by drilling through between the door and the wall before activating the switch.

She opened the door and went in to investigate. What was in front of her was a room that was completely lifeless.

There was a lot of identical furniture. It was like a hotel that offered the lowest rent per unit for a week.

"I was told to do everything from scratch, so everyone will end up scolding me, I guess. This really isn't like what the Kiharas would do."

The objects that had some form of life felt really bone-chilling here.

This scene here really reminded people of the Mary Celeste.

"…There are already 500,000 residents here, and there's another three million tourists who decided to stay for the time being because of the Natural Selector. Both sides are people involved and disguised as part of the Anti-Academy City Science Guardians. But where exactly did they go to? If they all went out at the same time, there should be a large commotion."

The unnatural muttering echoed in the empty room.

"(I have to rethink through my thoughts.)"

"(This is part of my data, from my short-term memory to my long term memory.)"

"(This is the operation I've carried out up 'till now.)"

"Such philanthropists. No, that's not it. The Academy City army that snuck into Baggage City was defeated. That means that the Piper of Hamelin only helped the ordinary people in Baggage City."

She didn't expect 3.5 million people to actually hide in such a place. Or rather, she hadn't found a large facility that could contain so many people.

"It's impossible for them to leave the town. Even if they weren't eliminated by the Five Overs, it's a low temperature of -20 degrees Celsius outside. They'll definitely die before they reach the next town."

If she thought of it that way, they should definitely be hiding in this town.

Where several places were divided into small districts.

In that case, she should forget about finding any dome facilities where a large number of people would obviously be gathered.

For example, in such a large residential area, if one ignored the living conditions and packed everyone in like trains, each building could hold about 45,000 people. Places that look inaccessible would inexplicably hold lots of people…that was Hamelin's method.

"…Maybe I should start blowing things up. Everything should end if I blow up the entire place. Even if they escape from the explosions, they would freeze to death once they lose their hiding places."

That was actually the simplest way.

Even if the explosions couldn't kill off all the Anti-Academy City Science Guardians, it could act as an effective groundwork before the decisive battle. It was a common method to destroy enemy structures, weapons, covers, and long-distance objects.

And the reason not to do so was also simple.

"Nope. Things will get complicated if Gremlin dies."

In a normal situation, Academy City and its allies would have expected the outcome.

However, it was different with Gremlin in the picture. Even after gathering clustered-type gas bombs to blow the entire town to dust, they might even last through. Also, if unidentified bodies appeared in piles, Gremlin might use this to escape.

First, they had to thoroughly destroy Gremlin.

Erasing Baggage City from the map would take place after that.

"It's really troublesome when the order's all messed up. Now we're stuck in the same predicament as the normal army."

At first, Kihara Enshuu's aim wasn't to search through Baggage City for civilians.

But if Gremlin and the Anti-Academy City Science Guardians were allied and planning something in Baggage City, they should keep this town in its original state where everyone was alive and the town was bustling. In other words, once they killed off people who were unrelated to this incident (not out of kindness or justice, but just so that they won't lose out on their benefits), Gremlin would appear to prevent this situation. 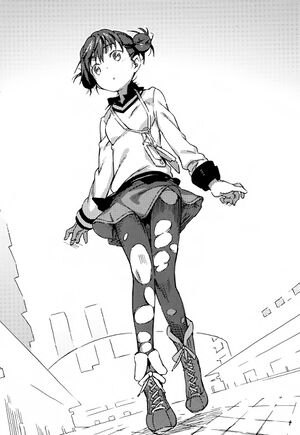 All just to search for them.

All just to kill them.

…But in this situation,

Kihara Enshuu gave the expression of a lost child as she muttered.

The smartphone that was hanging from her neck and the 1seg TV showed complex images one after another.

"Yeah, yeah, I got it, Amata-ojisan. The Kiharas would do this at a time like this."

Kihara Enshuu small hands tugged at the sides of her skirt as she jumped up lightly.

This continued for ten seconds. She tilted her head.

Kihara Enshuu's stomach grew cold and she felt a chill down her back as she started to move to the next destination.