“Not enough at all.”

No one knew what Kihara Enshuu was counting as she continued to play with her ten fingers. Her clothes were stained with waste and blood that was seeping out.

The smartphone that was hanging from her neck and the 1seg TV continued to show a complicated graph.

“Mm, yes. Sorry, Amata-ojisan. Yes, in this situation, the Kiharas would prepare a raincoat. To me, Byouri-obasan didn’t attack out of a sudden, and I expected her ambush already.”

In fact, a third-party who was seeing the graph would most likely not understand what Kihara Enshuu was doing. On one hand, it looked like a conversation. But in fact, it wasn’t. What Kihara Enshuu got was merely an inspiration. And this inspiration that appeared in her head was a self-muttering of words that were rearranged in such a way that those named Kihara would definitely do this.

She continued to walk down to the underground passageway.

The garbage disposal facility of the waste treatment plant was destroyed, so the warming effect in Baggage City was drastically decreased. She was in the house too, but she was shivering in cold. If she left it like this, no matter whether it was inside or outside the house, it would all be frozen.

But it didn’t seem to be enough.

They were telling her things

“Yes, this isn’t like a Kihara at all, Amata-ojisan.”

“It’s not like a Kihara to think of a strategy that anyone could think of!!”

She moved through the underground passage and entered a high-level resort hotel. She went through the lobby where no guards were present, took the elevator, reached the highest level, and opened the door where the keyhole was destroyed. This was the remains of a battlefield, where Kihara Ransuu and Útgarða-Loki had fought.

The pile of papers were thrown all over the place. Even now, those two important people were still lying on the floor. However, Kihara Enshuu didn’t care about that. Actually, Enshuu did feel bothered about leaving the "Kihara" Ransuu alone. But at the current moment, she needed to prioritize her actions as a Kihara.

Even so, Kihara Enshuu’s actions weren’t exactly that important.

She took out a test-tube from her clothes and uncorked the rubber cap. She added white powder that was like a sugar-stick added in coffee and poured water in from a flask in the wide hotel floor. She gently shook the test-tube, and the test-tube showed a translucent corroded substance. The fluid froze like jelly.

It was just something she bought in a supermarket.

It was just ordinary agar. However, it had other uses besides being food.

It could be used as a cultivating base for microbes like viruses and bacteria.

“…I can get this in about thirty minutes.”

Kihara Enshuu placed the test-tube with the cap opened into the coffee cup. Being barehanded, she was ready to use another cup to make instant coffee.

That was something Kihara Ransuu had used when he scattered chemical substances. Enshuu was ready to use the agar to capture the mildew and cultivate it as her own weapon. 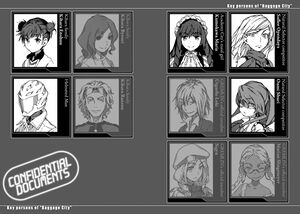 She held her cup with both hands. As she was worried about being scalded, she slowly drank the black liquid and waited for that moment.

"If the mold's genetic information mutates artificially, maybe it can become a biological weapon that can destroy Baggage City entirely."

There was more than one way to use a weapon.

The Kiharas would create more fresh nightmares from those savage ideas.