Marian Slingeneyer used a hand to cover one eye and leaned on the wall beside the street. The reddish-black liquid continued to flow through the gap, and liquid of the same color was coughed out from her mouth. She didn’t know the extent of the damage, but the huge impact had nearly caused her to lose consciousness. Right now, she was going through such pain.

(Did I get careless because I felt that she wasn’t of either the science or magic side?)

Marian Slingeneyer was being pursued. As she could move in such a wide area, it was a coincidence that she met a talented person. She modified her golden saw and hammer into weapons and carried out a feint attack, and managed to escape as a result.

“…Damn it. I’m really suffocating now that my support, Sigyn, was eliminated. Or rather, the power of the Dáinsleif. One strike can destroy all, is it? I’m not battle-oriented though…”

It was unknown who actually modified who.

In the end, it became like this. She ended up having to run through the chaos to escape, and she didn’t even have the self-belief that she managed to escape.

She walked into a shopping mall in the underground passage. It was unknown whether it was because of the chaos caused by the Kiharas and Academy City that there was no sign of customers or workers inside. It was unknown where they had gone, or even whether they were alive or not. But obviously, Marian Slingeneyer completely ignored that. She went to the pharmacy corner and looked for bandages and antiseptics.

Luckily, her eye didn’t seem to have lost its vision. She wiped off the blood that flowed into her eye, and she managed to regain her vision slightly. As her eyelid was damaged, the blood flowed in too. Even so, it was better for her to get a piece of gauze over it.

“…My right leg… Perhaps it’s better to do some taping here…?”

It was really reckless of her to endure the muscle pain caused by Kumokawa Maria’s wrestling moves and even try to run away. Heavy pain came from her right foot. And worst of all, she felt her leg swelling already. Marian Slingeneyer took out some bandages from the box, clumsily rolled up her overalls’ pants and exposed her knee.

Marian frowned as she looked at the rolled up bandage and again picked up the box that was placed aside to carefully look at the instructions written on the side.

“Damn it, what should I do now? Erm, use this to control the joint that’s in pain…?”

Marian Slingeneyer clumsily used the tape to secure her knee before letting down the pants of her overalls and tried to move. The pain was more or less reduced, but she couldn’t tell for now whether it was effective or not.

It seemed that there weren’t any drugs that could immediately stop the pain, as Marian Slingeneyer scanned through the rack but couldn’t find anything like that. She found a wet cloth, but she didn’t know whether she should heat it up or cool it in this situation.

(…There are three of us that are thrown into this situation, including me. But Útgarða-Loki backed out already, and Sigyn isn’t of any use here. In this situation, we have to purge them whether it’s personal or for the organization. We don’t know how many of the Kiharas are left, but the situation itself is really bad. The final survivor is me when I’m not even one of the main fighters?) 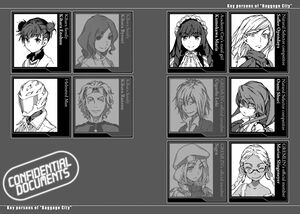 At this moment, a rattling sound came from the exit to the pharmacy counter.

Marian Slingeneyer fluidly drew out the golden saw from her work clothes, but on seeing the other party’s face, she immediately relaxed.

She actually smiled, and said, “Hm, what is it, Bersi? Don’t you feel that the main action’s about to begin soon?”