Difference between revisions of "Baka to Tesuto to Syokanju:Volume3 The Fifth Question"

‘Although John tried to take the airplane for Japan with his wife’s handmade lunch, he noticed that he forgot his passport on the way.’

‘John brought his wife’s homemade lunch along and wanted to take the flight to Japan, but on the way, he noticed that he forgot to bring his passport.’

‘John brought his homemade passport and takes the flight to Japan.’

Please think through the meaning of the words ‘homemade passport’ again.

Thus, it’s time for the briefing before the attack.

“So only classes D and E are willing to help out in the end?”

“However, now that classes D and E are willing to help, at least the situation is a lot better than usual.”

“That’s right, besides, half the girls were bathing the last time we attacked them, so the amount of forces they can deploy now is almost 50%. Thus, as long as we can beat those few teachers, we should have a chance of succeeding.”

“But since we caused quite a bit of commotion during these past two days, wouldn’t they stop opening the girls’ bathroom?”

“Most unlikely. The teachers have their own pride as well. Do you think they can say something like ‘we may be unable to stop the boys from peeping, so will the girls please don’t use the girls’ bathing area’?”

Like what Yuuji said, the teachers don’t want to lose their identity and pride as human counselors. Besides, since things are settled by a summoning battle, they can’t allow students to break through the defenses.

“This is just a wild guess…but isn’t it likely that the teachers are rather happy with how things are progressing?”

“Eh? You’re saying that the teachers are happy to let us peep?”

“That’s right! No matter what, the aim of this training camp is to ‘increase the student’s willing to study’. Speaking of studying, there is no better method than to use the summoning battle. And the girls have to also use the summoned beasts to protect themselves and stop us from peeping on them.” Yuuji analyses.

I see! So the teachers could have confined us to our classrooms, and yet the reason they didn’t do so is because of that? But aren’t the teachers a little too overconfident in thinking that we can’t break through their defences?

“Muttsulini, have you conveyed the time and location for the gathering to the other two classes?”

The expected time of action is at 20.10, and the gathering location is at the canteen. We intend to launch a full scale attack while the first group is still removing their clothes.

“Right, then it’s about time to move.”

“You’re right, most likely, the majority are eager to move out.”

Including the boys in classes D and E, we have almost 100 people. We can’t repeat what happened yesterday!

At this moment, our door was slammed open, as our classmate Sugawa-san came rushing inside.

“What’s going on, Sugawa-san? There should be several minutes left before the operation begins, right?”

“We’ve been had! Those girls were in ambush in the canteen. In the end, all our forces are scattered all in all the levels!”

How come it’s the enemy attacking us now? Is there a spy among us who leaked the intel?

“…We can’t possibly leak our own intel.”

As if reading the doubt in my mind, Muttsulini quickly deduces this.

Muttsulini can’t possibly be that careless, and even if our plans were really leaked, it’ll take some time for the enemy to take action.

“Our plan was seen through already? Yuuji says with regret.

That’s right, the enemy has already seen through our plan. Normally speaking, such a secretive plan can’t possibly be seen through. It can be said that the only reason why it ended up like this is only because the enemy understand Yuuji’s way of thinking. And there’s only one person in this world that can guess Yuuji’s thoughts.

“Kirishima Shouko, the title of number 1 in our academic year isn’t something to be snuffed at.”

Right now, the only thin advantagoues to us is for Yuuji to come up with something unorthodox. If even this can be seen through, we won’t be able to move at all.

…No time to hesitate.”

“What do you mean by that? Our battle plan is useless now! We can only regroup everyone. COMRADES, TIME TO MOVE OUT!”

Including Sugawa-san, the 5 of us move out of them room, only to realise that the outside is already a battlefield.

“You perverts! Let us tie you up!”

“We definitely won’t allow you guys to peep on us!”

“Damn it! Why are the girls appearing here?”

Seeing the group of girls blocking our group of comrades hastily summoned their summoned beasts, but the differences in points is too great.

“EVERYONE CALM DOWN! THE SUMMONED BEASTS CAN’T HIT US! WE DON’T HAVE TO CARE ABOUT THEM, WE JUST NEED TO CHARGE RIGHT OVER THEM!”

After saying that, Sugawa-san charges forward.

No! That judgement’s a mistake!

“No you can’t, Sugawa-san! It’s not just Ironman that you have to be wary of!”

I frantically tried to stop him with my voice, but Sugawa-san’s moving. It’s too late!

“Sugawa-san from class F, right? Follow me to the detention room. Summon.”

Walking up from behind the girls is Fuse-sensei. Even if we don’t summon, there’re still teachers around, and without beating those summoned beasts, we can’t break through. Thus, we have to gather all our forces together. No matter how strong a summoned beast is, there’s a limit to the number of enemies. Since the number of teachers aren’t as many as the students, so we should be able to do something at least if we do that…!

“EVERYONE LISTEN UP! GATHER OUR FORCES HERE! FOLLOW ME!”

Yuuji glares at Fuse-sensei as he gives the command. However, the direction he chooses is—

“OI YUUJI! ISN’T THAT WHERE THERE ARE THE MOST ENEMIES!? I FEEL THAT IT’S EASIER TO BREAK THROUGH BY MOVING TOWARDS THE STAIRS!”

It’s definitely where there’re the most people are gathered, and a few of the class A girls are there as well.

But Yuuji immediately refutes my suggestion.

“That’s the reason! If there’s a thin defence, there’s a likelihood that there’re traps behind it! Even if it’s tough here, I have to go through the most dangerous place!”

Hearing him say this, the distribution in forces is really uneven. It’s like inviting us to go downstairs. Maybe that is really a trap. As expected of Yuuji, to be able to think of this in this situation.

“FOLLOW SAKAMOTO! GET PAST SENSEI AND ESCAPE OVER HERE!!”

Everyone present immediately turn to look at a common point before charging at the same place. At the same time, the girls scatter aside. Are they blown away by our momentum? No, actually, it’s better to not make judgement too early…

Anyway, we don’t have time to bother about all these. We rush down the corridor in front of the staircase, turning around from the corridor behind the self-study area.

In front of us, Kirishima-san and the rest walk over.

I could hear Yuuji gritting his teeth.

It’s obvious that he won’t be happy. Because all his deliberate plans were countered by the opponent one by one. This shows that Kirishima-san’s thinking is a lot more cautious.

To Yuuji, there’s probably no greater shame than this.

“…I won’t forgive you for being fickle in love! I’ll let your body understand this.”

At this moment, Kirishima-san moves aside. Another person appears from behind her.

“Looks like I have a need to educate you on social rules.”

“THE ONE LEADING IS LEVEL HEAD MISS TAKAHASHI!”

This teacher gives us a cold yet knowledgeable feeling, giving us a lecturing glare through her glasses. If our opponent is that Takahashi-sensei, our class F only has the role of being beaten down.

Looking back in the opposite direction, somebody appears there.

Kudo-san waves her hand as if she doesn’t know anything. After that, the health Ed teacher Daishima-sensei walks up from behind her as if it’s to be expected. With those two as our opponents, even Muttsulini has no chance of winning.

“Aki, I got tricked by you during the day! You caused me to be so embarrassed!”

“Akihisa-kun, if you really want to peep on girls bathing, why didn’t you discuss with us first?”

In front of me is the familiar Minami and Himeji-san group. If Takahashi-sensei’s around, the subject will be combined subjects, and Minami’s weakness won’t be that obvious now. We have completely lost this battle. 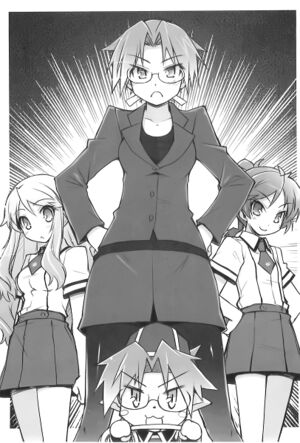 But even so, we can’t give up like this! If those photos are to be spread around throughout the school, my school life will be a whole lot greyer!

“EVERYONE, DON’T GIVE UP! FIGHT TILL THE BITTER END! SUMMON!!”

I called out my summoned beast and let it get into a battle position. The target is level head Takahashi-sensei. But even if we managed to break through this, there are still many opponents that we have to break through.

“Sensei, Aki’s summoned beast looks a lot stronger than he is—”

“No problem, Shimada-san. You don’t have to worry.”

Takahashi-sensei uses a hand to block Minami, who’s intending to assist her.

So she’s extremely confident, huh!? However, I’m more or less familiar with how to control the summoned beast! Even if it’s the level head, if I can control it properly…!

After locking onto the target, my summoned beast charges at her like a bullet.

“Yoshii-kun, I’m really disappointed in you. I thought that at least there should be something positive about you.”

After Takahashi-sensei glares at me coldly, she gives a command to her summoned beast.

The opponent’s wielding the whip in its hands, so I can’t grasp the timing of the attack. But at least I have to fight against it once to gauge the distance!

I raise my wooden sword to eye level, between my eyes, guarding against the enemy’s attack. At this moment, my summoned beast suddenly can’t move—and collapses onto the floor.

For a moment, I couldn’t do anything. And the next moment, a sharp pain reverberates through my entire body.

“IT HURTTTTSSSSS!! IT REALLY HURRRRTTTTSSSS!!! ISN’T THIS A TOOL FOR INTEROGATION!!!???”

In contrast to Ironman’s fist, it feels like my skin is being ripped as the pain spreads throughout my body.

“That Akihisa actually got hit once, and yet…as expected of the legendary talented woman…”

Takahashi-sensei’s marks appeared. WHICH IDIOT WILL EVEN ATTEMPT TO COMPARE THEM? ISN’T THE DIFFERENCE WAY TOO GREAT ALREADY!?

“Can’t be helped. If so, everyone’s to do things according to their judgement!”

Our commander here made an order that’s nothing too different from retreating.

After the order was issued, everyone’s to do according to their own decision making. How will they escape? Let us see this!

They’re a bunch of idiots.

“Yoshii-kun and Sakamoto-kun aren’t admitting your wrongdoing as well? Is it because you want to maintain your pride as commanders?”

Seeing Yuuji and me unwilling to beg for forgiveness, Takahashi-sensei narrows her eyes, seemingly with respect.

Kneel down and admit our wrongdoing? Oi, can you say something more decent?

Yuuji lifts his mouth and replies.

“Yuuji’s right, we’re very clear about this. There’s no need to get down and admit our wrongdoing.”

“Don’t tell me you have reinforcements?”

“Reinforcements? No, you don’t understand anything at all.”

“You’re right, we’re not talking about that.”

If this were an exam, Takahashi-sensei’s answer will only warrant her 0 marks. The reason why we didn’t kneel down and admit our wrongdoing isn’t because of pride or reinforcements, but—

“Oh yeah, Aki, I haven’t settled the debt I owed you during the day.”

“…Yuuji, I said before that I won’t forgive you for being such a Casanova.”

—The correct answer is that we won’t be forgiven even if we’re to kneel down.