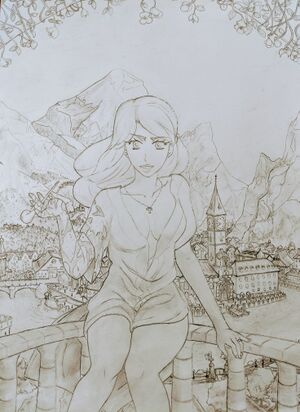 Dantega is a light novel written and illustrated by Deck of cards.

Based 1000 years after the battle of Armageddon and the Apocalypse...

The human race has virtually started over and is trying to put the pieces of its past glory back together. But with God's enemies still lurking in the shadows, the world is once again thrown into chaos by the Devil's son Damien, when he abducts a group of young royals and sends them to Purgatory.

The princes and princesses were set to be married in an attempt at world peace by the three largest kingdoms of Troy, Eiyazalo, and La'Juune. And their simultaneous disappearances send a ripple of hate and distrust through the world.

The royals aren't the only ones spirited away to Purgatory however, along with them is a man named Ubica, who holds tremendous power and along with it a mysterious past.

The other man is the Angel of Death named Rage.

These intentional actions by Damien threatens a world war with the potential to devastate what remains of humanity.

In order to stop this war, the group must travel through the 5 gates of Purgatory and escape back to Earth before it is too late.

To accomplish this, they must navigate their way through these new worlds, interact with its residents, defeat each of the 5 'Gatekeepers' and survive relentless attacks from the 7 Demons of the Hierarchy.

If you enjoyed the OLN, why don't you tell us in the Feedback Thread