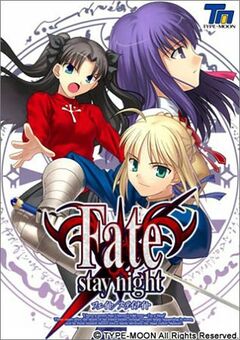 The Fate/stay night series is available in the following languages:

Shirou Emiya lost his parents in a fire when he was young and was later adopted by a sorceror by the name of Kiritsugu Emiya. Although he was full of admiration for his adopted father and yearns to become an ally of justice, Shirou has limited powers and was unable to become a strong sorceror like his father. That is until one fateful day, he was drawn into the Holy Grail War and had to summon a female "Servant" known as Saber in order to protect himself. It turns out that the Holy Grail War involves a series of battles among powerful sorcerors to fight for the possession of a relic that will grant one's wishes, the Holy Grail. There are altogether seven "Masters" who can summon their respective "Servants" from different classes known as Saber, Archer, Rider, Berserker, Lancer, Caster and Assassin. These "Servants" have to hide their names in order not to reveal their weaknesses to the enemies. The story revolves around Shirou and his entanglement in the Holy Grail War.