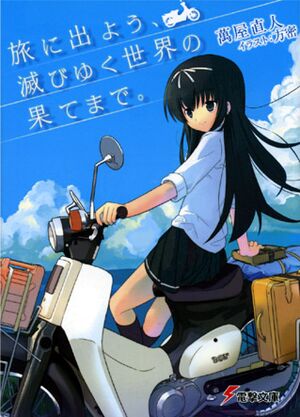 The Tabi ni Deyou, Horobiyuku Sekai no Hate Made series is also available in the following languages:

Our Journey to the End of the Ceasing World (旅に出よう、滅びゆく世界の果てまで。) is a light novel written by Tadahito Yorozuya and illustrated by Houmitsu.

The story revolves around a boy and a girl who travel together through a world that is gradually nearing its end. A mysterious illness has emerged that erases the very existence of everyone who suffers from it. The story does not, however, focus on the tragic aspect of this fairly post-apocalyptic setting, but rather shows the people and events the two travelers come across during their journey.

In charge of the driving and other technical tasks. As the settled part of the team, he always has to cope with the wild nature of his female companion, but he seems to gladly take up the task.

In charge of the foodstuffs and meals. Seems attracted to the boy, but judges that "the time is not yet right". Loves to eat, sleep and bathe... and to test her combat skills on the boy.