Daybreak on Hyperion is an original light novel story written by Aorii. It is mainly hosted on the author's blog Samaran Daybreak. The story is also currently undergoing a rewrite from the original - see this post for more details. 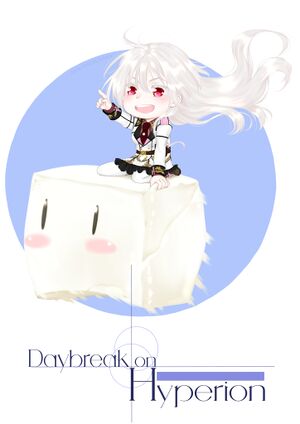 Daybreak on Hyperion is also available in the following languages:

Born into noble prestige and gifted with extraordinary talent, Pascal was a promising officer cadet whose deeds caught even the King's gaze. At the mere age of twenty, he had everything a young, ambitious man could need.

Except his habitual arrogance had destroyed every opportunity of a close friendship outside his political marriage.

Seeking a companion who meets his protracted list of requirements, Pascal decided to craft the 'perfect spell' for the upcoming familiar ceremony. If those around him were not fit to accompany his genius, then he would summon a best friend through his own hands -- one that was mature, intelligent, knowledgeable, bright, and cute as well.

He received far more than he bargained for... and in turn, so did the shifting geopolitical power balance of his world.

If you enjoyed this OLN, why don't you tell us in the Feedback Thread

Daybreak on Hyperion by Aorii

---NOTE: published redux chapters ends here. There may be more on the author's blog not moved to B-T yet---