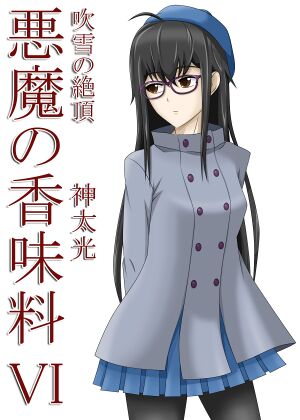 Akuma no Koumiryou or The Devil's Spice is an original light novel written and illustrated by Kanda Hikaru and edited by Kyle Tolray.

What does it mean to be fair?

Ageha, chef by day and cyborg assassin by night, kills to confirm his answer to that question.

After taking out one of the richest and most powerful men in Japan, he finds Kaika, the victim’s prodigy daughter, seeking him out, not for revenge, but for her own dangerous ambitions.

The deceptive and mischievous teen offers the young man a deal he cannot refuse.

Ageha needs to juggle restaurant kitchen politics, his own bloodlust, and his new moonlighting job.

Kaika has her hands full orchestrating corporate backchanneling while trying to keep a leash on her incredibly capable, perhaps too capable, new employee.

With life and death on the line, the dubious alliance between these two broken individuals leads to-

“Don’t spoil the meal! We haven’t even served the first course!”

If you enjoyed the OLN, please tell us in the Feedback Thread

The Devil's Spice by Kanda Hikaru