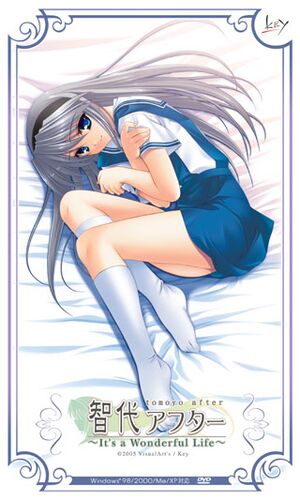 The Tomoyo After translation project is now an open wiki project. If anyone has some free time and wishes to contribute to this project, please register your username in the Registration page before translating any script files listed in the table at the bottom of the page.

Where you can purchase Tomoyo After

Though this is not an indication that the patch is in any way, shape, or form, near completion or readiness to release to the public, you may find this information useful.

HimeyaShop and PaletWeb are two (but not the only) online stores that ship overseas from Japan, and offer Tomoyo After* and Tomoyo After PS2.

Tomoyo After: It's a Wonderful Life is an adult only (18+) visual novel adventure developed by Key/VisualArts, released in 2005. More information is available at the Wikipedia entry located here.

If you wish to contact us, either do so via the main Talk pages, or visit us on IRC at irc.ppirc.net @ #ndt.