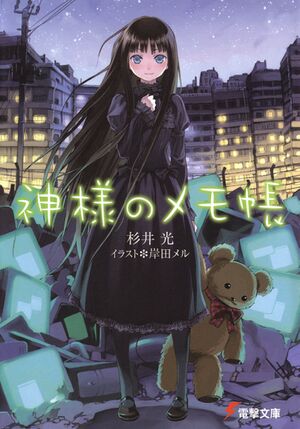 Kami-sama no Memochou (神様のメモ帳, literally: God's Notebook), also known as Heaven's Memo Pad, is a light novel series written by Hikaru Sugii and illustrated by Mel Kishida. The series is complete with 9 volumes and is adapted into other media.

The Kamisama no Memochou is available in the following languages:

"I am not an ordinary detective, but a NEET detective. Searching the whole world to locate the words of the dead."

The NEET Detective leading the NEETs who gathered in the dark alley— Alice said that.

The perplexing incident that Ayaka and I were wound into during the winter of my first year at high school, and also the malicious drug 'Angel Fix' that corroded the city, the mystery was unraveled by the detective girl Alice who doesn't take even one step out of her room.

"Knowing the truth might destroy the tranquil life of your past, do you wish to know even so?"

Because of my answer, the NEETs who usually do nothing were mobilized to solve the case!

If you enjoyed the series, why don't you tell us in the Feedback thread

Older updates can be found in the Kami-sama no Memochou archive.