The world is in utter turmoil as the screams of people in agony and despair spread like the instantaneous sound of hundreds of thousands of bombs exploding. This is the day of prophecy, the day of the great purge, the day of final judgement, rapture, the end of man, the day is the Apocalypse.

With a scythe resting on his shoulder, a man clad in black sits atop a hill overlooking a large valley in the countryside of Jerusalem. This man has no affiliation with either heaven or hell, yet he is the most important to both sides. Over the millennia he has had many names, such as shinigami, the god of death, the grim reaper; but the tall pale faced man clad in black has given himself a name that speaks to how he feels about his destiny. The destiny of forever being feared by humans, and used like a slave to the will of Satan and God. He has chosen to name himself Rage. 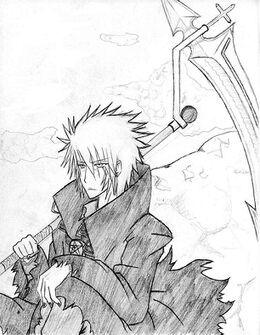 Rage is about to witness the greatest and most important battle in the history of man, in this, the valley of Harmagiddo will be the foretold battle of Armageddon.

Out in the distance approaches an army of millions of men and demons, a dark aura of hate and bloodlust seemingly cascades over the massive collection of desperate souls.

All humans fooled into believing they will be saved for fighting against God bear the brand of 666 on their forehead as proof of loyalty, with the brand there is no turning back for them. They have chosen to fight on the side of the beast leading them all forward. The Beast is the Anti-Christ.

Chosen by Satan to rule his army, this great deceiver of man looks toward the opposite side of the valley, where he gazes at the golden light of God’s army, led by none other than Jesus Christ. After analyzing the size of the opposing force a confident grin appears on his face, he can clearly see that his army largely outnumbers the other. With the simple rising and dropping of his hand the two forces charge toward each other. The battle prophesied will now commence, with the face of everything hanging in the balance.

With a sigh of resignation, Rage looks upon the landscape littered with the forms of millions of people; their movements picking up dust and the continuous sounds of their weapons and battlecries are almost deafening.

He stands to his feet and readies his scythe, he knows that the work forthcoming for him will be taxing, and he almost looks disgusted as the two forces collide.