“The Land of Children” —Burn Up— 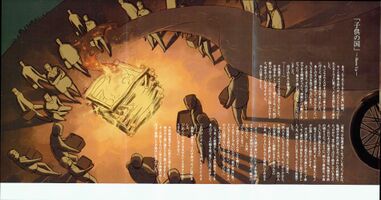 A traveler named Kino and a motorad named Hermes entered a country.

When they entered the largest park it had to offer, they witnessed a great bonfire.

A great number of adults were present, each one throwing various items into the fire.

Upon closer inspection, they were televisions connected to devices that allowed gaming, a book that only had comics in it, and collectible card games were thrown in, too.

Children gazed at them with xxxxx eyes.

Kino, who had taken off her gloves and took her time warming herself up, asked an adult who was taking a break nearby, tired from carrying all those things. Asked, what are you doing.

“Kids have been getting worse recently. It’s because of the influence from things that weren’t around when we were kids. So we’re taking them up and disposing them. From now on, our kids will go back to how we were as kids. Pure and honest, as kids should be.”

The bonfire blazed on and on, and a thoroughly warmed up Kino was about to leave when something happened.

Adults came to drag the children back, and forced them to line up in front of Kino. They were small things, perhaps five or six years old.

“Traveler and motorad. Since we don’t get this opportunity often, may the children speak to you? We think contact from the outside would be a good experience for them.”

“Come now, ask the traveler anything you want to know.”

“What kind of things?”

That was what one child asked.

“Why, anything. Ask anything that’s on your mind right now. How about things we adults wouldn’t ask?”

That was how the adult replied.

Okay, prefaced the child, gazing up into Kino’s eyes intensely.

“Miss Traveler. Can you please tell us—”

In the most earnest manner, the child asked this.

“How do we burn up all the grown-ups in this country?”

All the children disappeared before Kino—

They were sent back by the adults.

In the group of children who were dragged before Kino, the one who asked the question was gone.