A Super Cub was driving down a long straight road under the blazing sun.

It was silver and equipped with an improvised tandem seat and additional carriers to both sides.

The Super Cub was ridden by a boy and a girl.

The boy, wearing a half-helmet with built-in goggles, was sixteen years old. He was wearing a blazer-style uniform.

The girl, wearing a read half-helmet without goggles, was sixteen as well. And just like him, she was wearing a blazer-style uniform.

Their route had changed from northwards to southwards, but what had not changed was that they drove silently and steadily.

By that time, the girl had finally recovered her mood and was obediently clinging to his back. The hands around his waist and the additional heat against his back was supposed to be annoying to him, but for some reason he was pleased by it.

The unstopping roaring of the engine blended into the wind and became their background music.

"Do you still remember when I asked you to go on a journey with me?"

A smile escaped his lips when he recalled that dear recollection.

How could he ever forget? He had spent the days after losing his entire family and entering a new school without a particular reason with observing the slow motion of the clock, finding himself unable to have any hopes in tomorrow and yet unable to fall into despair.

But one day, all of a sudden, a classmate of his appeared before him. Not only had he forgotten her name, he could hardly even remember her face. Despite everything, she invited him to an aimless journey.

If he thought about it now, he realized how reckless that start was.

Of course he asked, "Why would you want to do that?"

And she replied with an honest smile, "Because it could be fun."

Everything after taking her hand unconsciously happened like a flash. Leaving their bags and everything behind, they slipped out of school in their uniforms and left the capital on a bicycle without delay.

He hadn't really thought about it deeply. He had simply felt that going on a planless journey with her was much more fun than idling away in the city.

And this feeling had not changed to date.

"I couldn't forget about it even if I wanted! That's how impressive it was," he laughed and felt the girl press her face against his back.

The distance between them had not changed at all in these three months. Neither had the distance shrunk, nor grown.

But the relationship between them had changed a little.

The journey of the boy, the girl and the Super Cub was not going to end like this. Neither could he, nor did he want to let it end.

"But say, boy. If you could return to the day before we set off... what would you do? Would spend again three months with me to come all the way here?"

He narrowed his eyes a little.

Her question was vague, impossible and no use thinking about. But the emotions the girl had put into that question were much more than just simple curiosity.

He gulped down the lump in his throat the awkward silence had caused.

He giggled weakly and continued with a smile, "...I didn't think it would take so long to get here to this island! If I could return to that day, I would absolutely change our destination. No doubt."

With a thump the girl knocked her helmet against his back. He could not see her face, but the moisture on his shirt conveyed much more to him than his vision.

Normally, the boy would have talked his way out and changed the topic at this point. But today and only today, he chose to go a step ahead. Collecting his courage, he continued:

Be it the end of the world, the depths of hell or beyond nothingness.

"...Mm. Thanks," she said as she pressed her face against his back.

The sun high up in the sky was burning their backs, but the moisture on the boy's back did not dry for a while.

A motorbike is driving down a long straight road on the northern continent. No one knows where their journey is headed—except for a Super Cub and a diary. 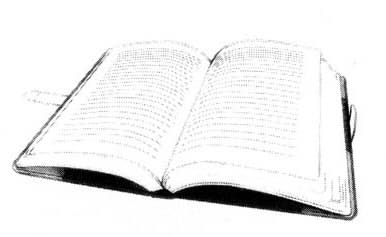