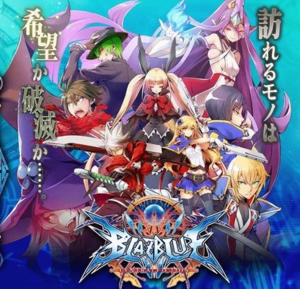 BlazBlue: Calamity Trigger (ブレイブルー カラミティ トリガー Bureiburū: Karamiti Torigā) is a fighting game developed by Arc System Works. The game's name is a portmanteau of "blaze" and "blue," with the "z" sound omitted in the Japanese pronunciation, rendering it similar to the word "brave" in pronunciation.

Other game sequels include Blazblue: Chronophantasma and Blazblue: Central Fiction both released on various systems.

Lite novel adaptations for Calamity Trigger and Continuum Shift also exist and are listed below.

Two visual novel spinoffs titled Xblaze: Code Embryo and Xblaze: Lost Memories were released and are the original story to feature the character Es recently announced for Blazblue: Central Fiction. It is believed Nine and Celica A. Mercury make cameo appearances in Lost Memories as well.

Phase Shift is a novel series based on that game written by Komao Mako and the illustrations by Yuuki Katou. It provides insight into the backstory of the Dark War, the conflict with the Black Beast between 2100-2110 in Blazblue's timeline and culminated with the introduction of Celica A. Mercury to the game's plot in Chronophantasma as the final Phase Shift novel was released right before the game came out.

Bloodedge Experience came out between Chronophantasma and Central Fiction's game releases and before Naoto Kurogane's introduction as a playable character to Blazblue.

Additionally several canon short-stories were released in various formats, including inside Material Collections and Drama Cds.

Due to the convoluted and non-linear flow of how lore is presented in Blazblue, this site will organize the releases in order of release.

The BlazBlue series is also available in the following languages:

Before the events of the game, humanity was on the verge of extinction from a creature called the "Black Beast." The world was saved by six heroes who wielded magic. They helped humanity create "Ars Magus", a fusion of magic and science, to defeat the Black Beast. This event would be later known as the First War of Magic.

After the war, the Novus Orbis Librarium (the Library or NOL for short) was created to govern the world with the use of Ars Magus. A great deal of dissent was caused by the Library, partly due to Ars Magus' use in nearly every facet of society, and the widening socioeconomic gap between those who could and couldn't use Ars Magus. This dissent would eventually form years later into the Second War of Magic or also known as the Ikaruga Civil War, when the city of Ikaruga openly rebelled against the NOL. Upon winning the war, the NOL imposed a harsher rule on the world, punishing any rebellion against the NOL with death.

In December AD 2199, several years after the Second War of Magic, a branch of the NOL was utterly destroyed by an SS-class rebel named "Ragna" also known as the "Grim Reaper", in an attempt to destroy the Librarium. The NOL, hoping to stop him, immediately announced the largest bounty ever, available to anyone who could capture him. Interestingly, Ragna possesses a powerful form of Ars Magus known as the "Azure Grimoire." This led the NOL, as well as the other fighters, to hunt Ragna not just for his bounty, but also his Azure Grimoire.

The games slowly develop Ragna's battle with his nemesis Yuuki Terumi and other fighters as various factions follow their agendas to harness the Azure, destroy the Master Unit: Amatarasu, or protect those they care for.

21 Septermber 2017 Lowtier asked me to pick this up since he got salty and stopped caring about BB lore after CF's story mode. Use message or Talk to communicate with me.

B-baka, it's not like I want this translation to be as good as possible or anything... (tilts head to side as twin-tails sway in the wind). kappa. Post in Dustloop short story thread if you have questions or comments for me. 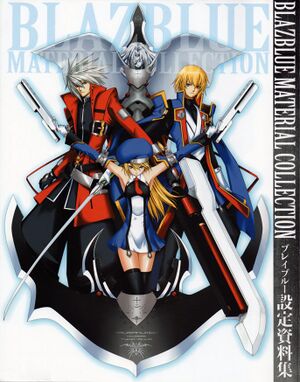 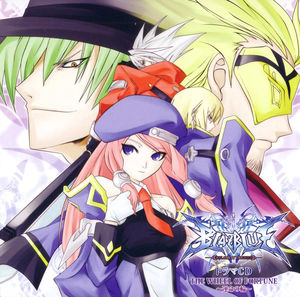 Synopsisː The story of how Hakumen came to exist in the main Blazblue timeline in an alternate Kagasuchi where Noel Vermillion never existed and Tsubaki Yayoi became Jin Kisaragi's secretary instead. 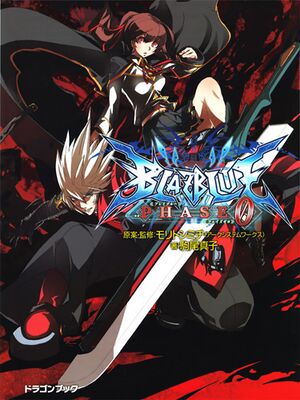 Synopsis: Ragna the Bloodedge. That man is nicknamed Grim Reaper and possesses the power of Azure Grimoire. Yet, he awakens in an unfamiliar land and has lost both the Azure's power and his memory.

In this unknown world, he comes across Celica, a girl who is able to use healing magic, and a beastkin warrior named Mitsuyoshi. Their journey is closely related to the Black Beast, a being which drive humanity to devastation. However...

The popular fighting game series BlazBlue's history, previously shrouded in history, is about to be laid bare. The official story leading to where it all begins has arrived! 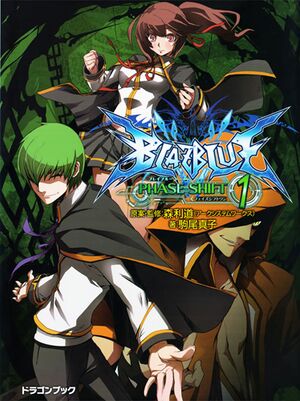 Synopsis: AD 2106. The world is in chaos from the threatening Black Beast. At the Mage's Guild-governed island Ishana, a student Kazuma lives a normal life. But when he meets Yuuki Terumi by chance, history receives a new Phase Shift.

"If you can get the Azure, you can take back whatever you want. Things you lost, things you forgot, whatever."

Is that the prelude of destruction? Or a gospel of salvation...?

Within the light and darkness of the Boundary, hope and despair blend together. The curtain for a new episode of BlazBlue's official story has been raised! 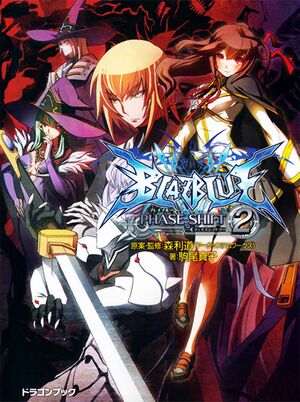 "How would you like to become a real hero?"

Jin Kisaragi, in the brink of death, meets one young girl. At that moment, the last gear to truth begins to turn...

Finally, the Black Beast is about to be resurrected. The ones who fight, the ones who protect, and the ones working in the shadows... Many feelings and thoughts are entangled, and the stage of the final battle for mankind's survival is set.

'The Dark War'. The biggest mystery in BlazBlue history that leads to all possible futures. All of its secrets will be revealed here! 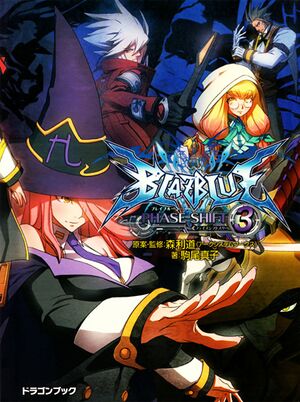 Synopsis: Nox Nyctores: Take-Mikazuchi. It appears all of a sudden during the decisive battle between mankind and Black Beast. With one blow, it overturns the battle situation. Nine, rejecting the powerful weapon, deepens her conflict with the other Ten Sages. Furthermore, she is restrained from participating in the battle.

During the intensifying chaos and hopeless situation, Celica reunites with 'that person' once more. That meeting leads to a new fateful Phase Shift, and yet...

'The Dark War'. The biggest mystery in the popular fighting game BlazBlue. The heroes are advancing to the final battle. Their thoughts and bonds are weaving a tale of truth, a tale that will be recited here! 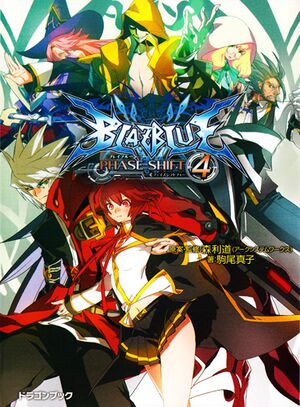 Synopsis: Since the fall of Take-Mikazuchi, the Magical City of Ishana finally acknowledges the Black Beast's threat. Within desperation, the Six Heroes and the entire human race are about to start their last counterattack!

Just what is the fateful Phase Shift that waits for the heroes after their battle...? This shocking novel series will draw the truth of the biggest mystery in the popular fighting game BlazBlue's history, 'The Dark War'. The time for conclusion has come! 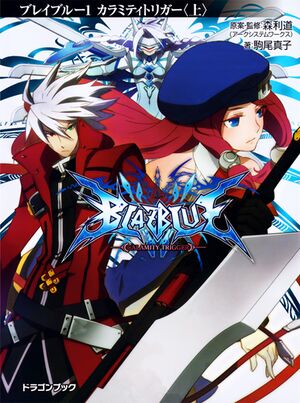 Synopsis: AD 2199. The world is covered in seithr and mankind is forced to live in Hierarchical cities, ascending constructions similar to towers.

The 13th Hierarchical City of Kagutsuchi has been infiltrated by a man with the most bounty in the world. He is Ragna the Bloodedge, the 'Grim Reaper', a man who possesses the Azure Grimoire. Thus, the wheel of fate begins to turn. 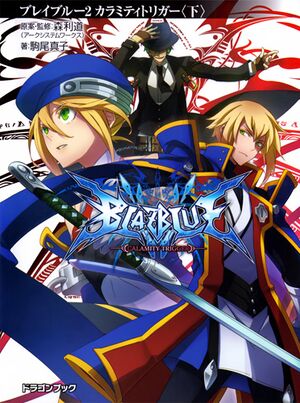 Synopsis: During his journey, Ragna the Bloodedge, the 'Grim Reaper', travels to the 13th Hierarchical City of Kagutsuchi to destroy the Cauldron. At the same time, Noel Vermillion, carrying the magic guns Bolverk, also heading to Kagutsuchi in accordance with the order from Librarium. Ragna and Noel... When both of their destinies intertwine, the eternally turning wheel of fate shall be altered! 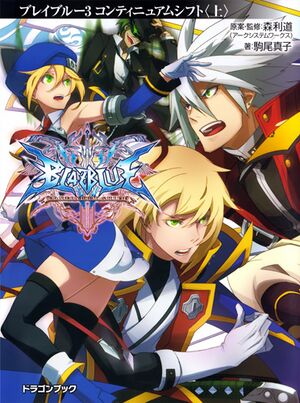 After the intervention of Calamity Trigger Noel Vermillion, the loops that appear to last forever came to an end. However, when a warrior from Sector Sever named Tager encounters a 'prime field' in the ruins of the 5th Hierarchical City of Ibukido, fate changes to a new phase.

On the other hand, after he went through a struggle to death with Nu, the 'Grim Reaper' Ragna the Bloodedge sees the image of his sister on a Librarium girl named Noel. However, a shadow aiming for them is inviting Ragna to a new battle——. A new Continuum Shift of the super popular fighting game BlazBlue begins! 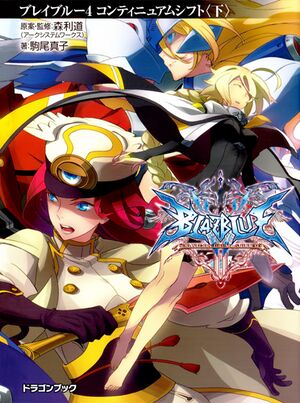 Λ – 11, the girl who assaulted Ragna the 'Grim Reaper'. He meets with the 'prime field' girl, but she invites Ragna to an even harsher battle. Meanwhile, Noel was hurrying to meet her best friend Makoto Nanaya. But before her, her other best friend Tsubaki Yayoi appears. Toward Noel who is glad with the meeting, Tsubaki——.

Continuum Shift. It is all the possibilities of the world. The result of many destinies and infinitely equal endings is waiting for Ragna and the others. Now, the decisive battle that shakes the world begins!!

Synopsis: This new expansion to the Blazblue universe follows the story of Naoto Kurogane a high school boy with a special right eye and connection to the Amanohokosaka Clan. Learn the story of Blazblue: Central Fiction's newest playable character in this multi-part story that bridges the gap between Xblaze and Blazblue that includes familiar characters as well! 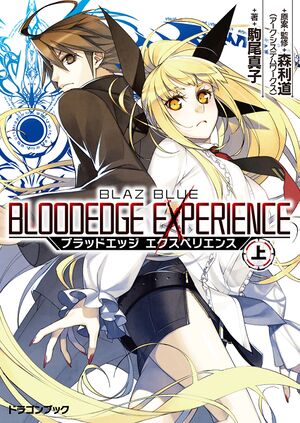 Synopsis: "Kurogane Naoto was a mostly ordinary high schooler who lived a peaceful life with his childhood friend Hayami Haruka. What wasn't ordinary with Naoto is that his right eye is a little special, it possesses a special ability, "Hunter's Eye", that make it possible for Naoto to see other people's Life Force in numerical values.

But his ordinary days ended when he met a girl with such high Life Force that she couldn't possibly be human. The girl introduced herself as Raquel Alucard, a vampire. She ordered him to get the hold of the Azure.

And so Naoto was dragged into a bloody battle surrounding the Azure." [From BB wikia; verify if from back cover] 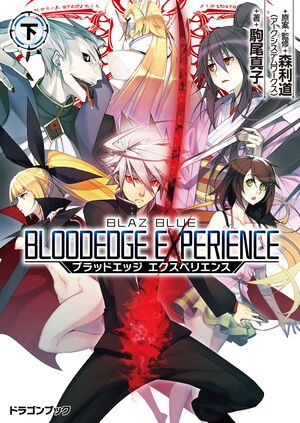 Synopsis: "The swung down red blade, will carve a new legend of BlazBlue!

Kurogane Naoto, who have awaken the "Bloodedge". His little sister Saya's deadly sword is approaching him! A collision of several special ability users. And what awaits at the end of the Azure seeking Raquel Alucard's wish... " Outside Chapter is speculated to be set after Central Fiction's events, but before Central Fiction Naoto enters main Blazblue Central Fiction. It's similar to how the Black Beast existed in 2100 even though Ragna was not created until 2190s.

Synopsis: A light novel set during the Ikaruga Civil War! 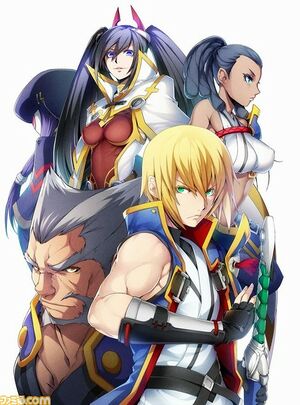 Synopsis: The story follows the graduation of Jin Kisaragi from the Military Academy as he enlists to fight in the Second War of Ars Magus or the Ikaruga Civil War for the NOL. In this tale, some light is shed on the brutality of NOL in dealing with the insurrection of the Ikaruga Federation for freedom against the NOL hegemony and monopoly of Grimories. Being deployed to the most contested region with the most violent opposition, Jin must deal with social tensions of being a Duodecim member among lower-class allies with the tide turning against their forces. There is more than meets the eye to this war though, as Jin and his new unit encounter signs of Sector Seven (the other faction against the NOL) experiments. Not only that, but Jin's new unit, the 9th Unit or "The Hounds" exist to only weaken enemy forces enough so that higher-class units can sweep in and claim both the spoils and glory of war in a battlefield meant only to test new weapons and never to retreat or advance. What other hidden-agendas will Jin Kisaragi discover in this farce of a war?