There was a white girl.

She had long white hair, she had skin so white it looked transparent, and she wore a white dress made of an unknown material.

This girl who was dyed completely in white was collapsed face down on the ground.

Another girl stood next to her.

This other girl was just as white. She looked down at the collapsed girl with an unimpressed look. She lifted up one slender leg.

She then casually crushed the head of the girl with an identical face underfoot.

Immediately afterwards, a change came over the girl on the ground. It started from the center of her crushed head. Her white hair, her almost transparent skin, her dress made of an unknown material, and everything else all transformed into countless pages of reports.

The wind picked them up and the hundreds, thousands, or even hundreds of thousands of papers scattered into the darkness. Progress Report #201. From the Items Left Behind by a Dead Freelance Writer. Records of Player 2's Actions. What Each Person Held. Report on Methods of Using the Absurd. The other girl grabbed one paper between two fingers.

She glanced at the report and gave a light sigh.

She let go and that paper seemed to dissolve into the darkness as it was blown away by the wind as well.

The remaining girl was not concerned with where all those papers had gone.

She quietly spoke in a disinterested tone. 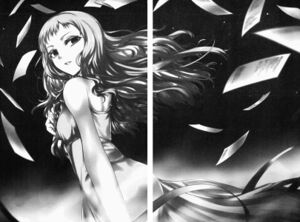 “Phenomena that can be explained in words cannot be described as absurd.”

With all of the report pages having blown away and disappeared, the girl began walking. She was surrounded by darkness in every direction. She walked through that scenery that looked as if it could lead anywhere and like it led nowhere.

This girl who had eliminated the existence known as Objective Alice disappeared into the darkness.

For just an instant, the hem of her dress came apart absurdly and what looked like countless reels of film spread out.