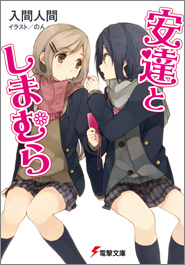 Adachi to Shimamura (安達としまむら) is a light novel series by Iruma Hitoma (入間人間) that centres around the friendship between two high-school girls, Adachi and Shimamura. The story outlines their everyday events, and contains mild yuri themes. It began as a series in Vol. 28 of 電撃文庫MAGAZINE (Dengeki Bunko Magazine) in March 2013. Since then, seven volumes have been published by ASCII Media Works with Non (のん) as the illustrator.

The second floor of the gym - this was where we always met. It was class time but of course, there weren't any classes going on up here.

This was where Shimamura and I became friends. We hung out here – talking about TV shows and cooking, playing some ping pong...This is where we fostered our friendship.

Leaning my head against the wall, I let out a small sigh.

What could this feeling be? Yesterday, I'd dreamt of me and Shimamura kissing.

Not that I'm like that. I'm sure Shimamura isn’t either. It’s not even something worth repeating myself about, but really, it’s not like that.

It's just that when she hears the word "friend", I want her to think of me first. That's all.