Amaryllis in the Ice Country:Epilogue 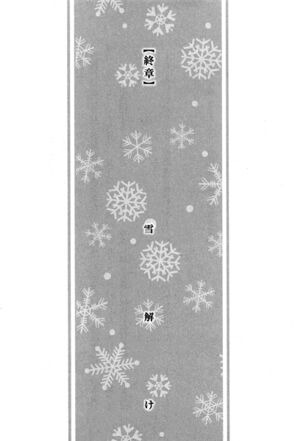 After the long Ice Age ends, the world finally thaws.

Humans again continue to weave humanity. With the assistance of robots, the few humans who evacuated to the shelters and survived over a long period of time built little villages, developed lands, and slowly moved towards the path of recovery.

And as recovery passes, ‘rescue squads’ are dispatched everywhere to investigate. These rescue squads managed to gain much, and they saved many survivors in isolated villagers or deep underground. In one instance, they managed to save more than a thousand in a shelter, and in another, they found many corpses within.

The discovery of our Cradles happened a long time after the rescue squads were dispatched.

Upon hearing this, the rescue squad members doubted their ears.

They run as the leader called out. “Over here!” the young member shouted, and the door of what appeared to be a control station opened.

There were dozens of long-term cryo installations—commonly known as ‘Cradles’ lined up there. Each of them was glowing weakly.

The leader looked inside the Cradle, sounding startled. These Cradles were connected everywhere through dozens of cables, and appeared to be eggs in a warm nest.

The leader kept looking at the Cradles intently.

“Looks like it. Most likely the robots used to manage the evacuation.”

“Extremely good. Very likely that they can be repaired.”

“Good, move them back to base first. We’ll ask them about the details.”

On the leader’s command, dozens of Cradles were carefully moved out by the members.

“The underground evacuation facility here should have ceased to operate already.”

The leader muttered in shock as he watched these Cradles.

“What do we do with these?”

And then, the leader finally sensed the two robots lying inside the room.

One of them was a girl with blue hair, and the other was a blond man.

Strangely, there was a cable extending from the man’s chest, and a battery attached to the girl’s chest.

“He definitely tried to save the girl.”

The leader wiped away the ice on his mustache and muttered, “Most likely.” These two embracing each other tightly appeared to be intimate lovers.

At this moment, the leader recalled his dead wife when the end came. He kept embracing her until the very end to save his wife from being frozen. However, his wife died, and only he lived. He joined the rescue team that faced such perils, all for the sake of making up for being unable to save his wife.

“What do we do? They look really damaged here.”

On a closer look, the two robots were thoroughly damaged due to frostbite. There’s a low chance of fixing them, but their peaceful sleeping faces made them seem alive.

After hanging the icy cold medal to the girl, the leader said,

I have a dream.

Inside this dream, there’s me, Eisbahn, Viscaria, Götz, Daisy, Gappy, Chief—all the villagers are gathered together.

In this dream, the Prayer Festival’s at its loudest, and everyone’s singing and preparing. Shipping materials, delivering them, discussing the performances on the stage. It’s just a normal day, yet I love it so hopelessly. Thinking about how such days won’t return again, I keep singing as I cry. It’s a strange dream. And then—

“Miss Amaryllis, do you hear me?”

I open my eyes, and sense light. It’s a dazzling light; it’s a warm light.

The nurse immediately scampers out to the corridor, and loudly calls for someone.

A minute passes, and the nurse manages to bring the doctor in.

The doctor’s a woman. She’s in a white robe, her long red hair tied behind her.

Upon hearing the doctor’s voice, I look at her in shock. This voice is familiar.

“Ohh, you finally noticed? How sharp.” The doctor smiles, “When I was reborn, they modified my face slightly, but at least they managed to preserve the hair color and voice base.”

That doctor—Viscaria extends her feelers from her fingertips.

“It’s been a while, Amaryllis.”

I stare at her in shock. Viscaria briefs me on what happened back then. After being found, fifteen years passed, and the Ice Age approached the end. Our masters awoke in the evacuation shelters, and the world’s slowly moving towards recovery.

Viscaria hands me a mirror.

I see a girl with long blue hair reflected in the mirror. The skin’s abnormally white, and those the eyes have gone from blue to dark blue, there’s no doubt that it’s me.”

I stare at the mirror in shock.

And then, there’s something shining on the chest. ‘108th Grand Prix Winner Amaryllis Alstroemeria and Eisbahn Tricrytis’

With trembling hands, I raise the medal.

“I duplicated it with a crystal to avoid it from melting. It’s the same inside.”

I ask, and Viscaria shakes her face with an anguished look.

If there’s only one life, I’ll give it all to you. I shall take away all your love. This shall be a one for one—halving.

I grab the medal firmly, and mutter, “Farewell…my Eisbahn.”

The hospital door opens, and a crowd swarm in like an avalanche. There’s probably more than thirty, and I can hear more footsteps on the corridor.

There are some I have never met before. Some are adults, and some are children.

But I can tell on one glance. Their expressions, vibe, familiarity.

“Hey hey, this is a hospital. Settle down now.”

The children swarm in. The first to leap over is a girl with chestnut hair.

She rubs her face on my chest as she sobs. The other children too shove each other as they approach me, gathering around my bed.

After this little ruckus.

“Everyone, this is a hospital after all, so quiet down!” The nurse from before reminds everyone.

“What do you mean, after all?”

“The main facility is a research center, and this hospital is just an additional one, so ‘after all’.”

Right when I focus on their argument, “Hey!” Daisy lifts her face from my chest.

“There’s a kid I want to introduce!”

With Daisy prompting, the nurse from before arrives before me, giving me a solemn bow.

For some reason, nostalgia awakes within me.

“…Did I meet you somewhere before?”

“Back then, I was still a baby, so you may not know me. I was sleeping inside the ‘Cradle’ though”

I have a flashback. The Cradle Daisy carried, and the name on the plate, I remember is—

“It’s an honor to meet you. I’m Gabriella White.”

The girl looks a little nervous as she lowers her head.

I reach my hand out and pat the girl’s head gently. The girl looks at me in shock, and shrinks back, seemingly scared of itchiness. Her face is beetroot.”

“Most of the staff in this hospital are the children in the Cradle back then.”

Daisy whispers to my ear,

There are a few young boys and girls smiling at me. I nod and smile back. They all cheer out loud.

The sunlight seep through the window, lighting the room. The wind ruffles the curtains, and outside the curtains, there’s a lush grassy field of the hospital with many people, and robots. I see a nursing robot push an elderly around on a wheelchair, strolling around, and next to him, a child robot’s sleeping soundly on the knees of the human mother. The servant robot holding tea cups are serving drinks. A man dressed in work uniform calls out to a hobbling robot, and fixes him immediately. Humans and robots continue to maintain their personalities, and help each other.

—Since both of you want this ball—

Looking up at the ball dancing in the sky, I recall the voice and smile of the Principal.

Again, I clutch at the medal on my chest. Under the sunlight, the petal in the medal is dyed gold, and as the angle of the light changes, the flower appears to be blooming for an instance.

After sending off the long winter, the world shall welcome Spring again.