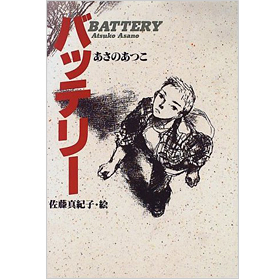 Battery (バッテリー Batterī) is a six-volume completed sports light novel series by Atsuko Asano that was published by Kadokawa Shoten. It is a best-selling work that received the Noma Prize for Juvenile Literature in 1997 and the Shogakukan Children’s Publication Culture Award in 2005. The series has seen a manga adaptation, a radio drama, feature film, and TV drama.

An anime television series adaptation will premiere in July 2016.

This is a series of stories about boys and baseball. Takumi and Gou, the two main characters, meet and form a pitcher and catcher team (the Battery of the title). Takumi is confident in his fastball but is resented by his teammates, who are all trying to regain some autonomy in the face of pressure from their teacher, the baseball coach.

Despite this, Takumi maintains his confidence and heads to the pitcher’s mound. At the same time, Gou suffers in the face of his own limitations. Takumi, who had never been interested in others, begins to want to know more about Gou.

Will Takumi realize his potential as a pitcher? What will happen to Gou?This popular series vividly depicts the struggle to be true to oneself. The intense feelings and tranquility of this series place it on the front line of Japanese Children’s literature.

Translators are asked to register the chapters they want to work on.

If you enjoyed the translation, why don't you tell us on the Feedback Thread