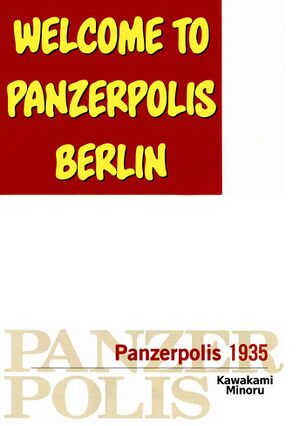 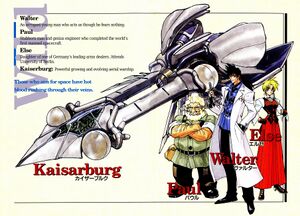 Walter: An arrogant young man who acts as though he fears nothing.

Else: Daughter of one of Germany’s leading arms dealers. Attends University of Berlin.

Text: Those who aim for space have hot blood rushing through their veins. 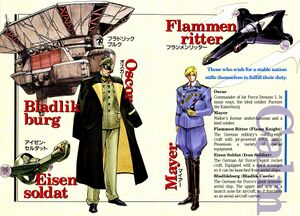 Text: Those who wish for a stable nation stifle themselves to fulfill their duty.

Oscar: Commander of Air Force Division 5. In many ways, the ideal soldier. Pursues the Kaiserburg.

Eisen Soldat (Iron Soldier): The German Air Force’s spirit rocket craft. Equipped with a spirit scramjet so it can be launched from aerial ships.

Bladlikburg (Bladlik Castle): The German Air Force’s giant armored aerial ship. The upper sail acts as a launch zone for aircraft, so it functions as an aerial aircraft carrier. 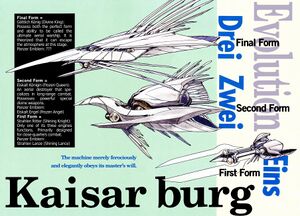 Final Form = Göttlich König (Divine King): Possess both the perfect form and ability to be called the ultimate aerial warship. It is theorized that it can escape the atmosphere at this stage. Panzer Emblem: ???

Text: The machine merely ferociously and elegantly obeys its master’s will. 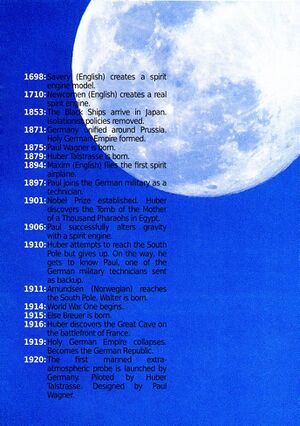 1897: Paul joins the German military as a technician.

1901: Nobel Prize established. Huber discovers the Tomb of the Mother of a Thousand Pharaohs in Egypt.

1910: Huber attempts to reach the South Pole but gives up. On the way, he gets to know Paul, one of the German military technicians sent as backup.

1916: Huber discovers the Great Cave on the battlefront of France.