When I think of the French language, the first thing that comes to my mind is “Bonjour~, how are you doing? (really roll those r’s)”, so I knew I was going to have to spend some long nights on this one.

Now, (“now” what?), the City Series seems to be where the idea of a consistent setting goes to die, but this one is even more unique than most.

After all, when I pitched the series to my editor Watchman Satou-san, I told him this:

“Double blondes! A maid automaton! There will be robots! It’ll be fast-paced with lots of action!”

He said that sounded incredible, but then I came back with this. Once I wrote it, those selling points just seemed vanish. I instead had a story of a wild girl and a gentle girl getting to know each other and worrying about things. It’s a slower pace than City usually is, but I’m going to use all that buildup to really get things moving in the second half.

The City Series’ France is following real history pretty closely, but please understand that a lot of things are different. Unlike a piece of historical fiction, this is a fictional world with its own fictional history for double the fiction.

Looking into this period of history can be dangerously fascinating, but if you’re interested, look into the events in Europe during World War Two. The Normandy landing operation at the end of this volume has been used in a lot of movies and such, so you can tell that this period is what war is for Western Europe.

Now for the customary phone call. This one is from a riverside payphone. (I still only have internet at home, so the phone and fax machine aren’t hooked up yet.)

“Oh, Kawakami? Sorry, but I’m about to head for the office.”

“What? The office? Don’t be ridiculous. You work at a company.”

“If you don’t think about what words mean before you speak, it’s going to lead to misunderstandings. Like that you run too much.”

“Oh, shut up. I’m about to get to sleep. Now, tell me what you thought of Paris.”

Now this is a problem. Did I really write anything that dirty this time?

Anyway, time for some personal information. I’m still running my website. I’m posting information on the different cities and an original story whenever I feel like it, so check it out if you have time.

It seems the Osaka game is sold out, so consider yourself lucky if you managed to get a copy. I am writing up a walkthrough on my site.

The URL for Tenky, the company I work at, (the Osaka game and this book’s illustrations were both made there) is http://tenky.co.jp, so check it out. You can find the most information on Osaka there.

This will continue with Part B, but while editing and rereading Part A, I was thinking about the following question:

“Who is the most selfish?”

May 1999. A morning with a meeting scheduled later. 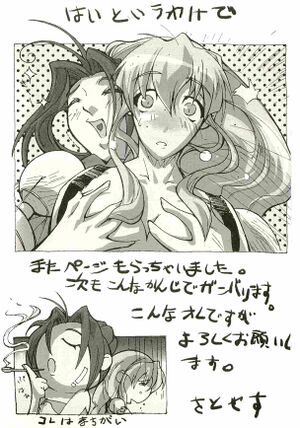 Top: And with that…

I was given a page again.

I plan to keep at it like this next time too.

I might not be the best, but I hope you will support me.