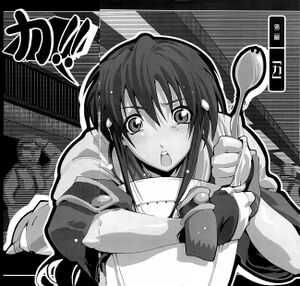 While I was eating in the crowded cafeteria, you sat next to me with a docile look on your face.

“Hey. How important is power to you?”

“Where did this come from all of a sudden?”

“Well… I was thinking about doing more and putting in some hard work.”

“I’m not sure what you mean, but I see. …Hard work sounds like a difficult thing for a girl. You just don’t seem like the type.”

“I’m not saying I’ll create a field of power with my words or anything. …But is it really that difficult?”

“Yeah, it is. Just think about it. How do you write the kanji for ‘hard work’? You take a woman’s crotch and-…”

You hit me with an angry punch with the force of your hips behind it.

“Wh-what was that for!? I hadn’t even gotten to the punchline yet!”

The next blow hit me, no questions asked.

Ah, wait, stop. Don’t go for a full barrage. Don’t clench your fist tight and thrust it straight forward either. But the low sound of the blows is pretty cool.

No, it wasn’t. Anyway, I dodged as much as I could and ended up out of breath. You and I faced each other with a chair between us.

“Wait, wait, wait just a damn second. This is the cafeteria. Listen. If you have a problem with me, then let’s take this outside.”

As soon as I said that, every last student in the cafeteria made a mad dash outside.

A closer look showed that I was one of them.

This isn’t really about the story, but the guy to the right drawn in horizontal lines is kind of creepy. More importantly, he looks just like a friend of mine I’ll call N, so what’s up with that? There were a bunch of other people there too, but they were covered up by “You”. 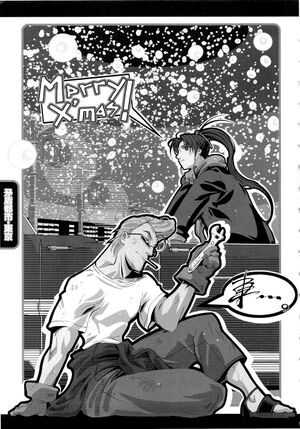 It was late at night on Christmas and I was sitting below the chilly sky in Boss’s convertible.

We were on the bridge connecting the city we lived in with Akishima. Roasted by the frozen Tama River below, everything was absolutely frigid. Blue flames of snow-summoning gas lit the gas lights lining either side of the large four-lane bridge.

Boss was down below the red car repairing it and I sat in the passenger’s seat. On top of the sounds of Boss’s chiropractic car treatment, I heard the lively sound of an electrain running through the city.

Given how late it was, that was probably the last one for the night. The electric guitar tones running along the continuous track railway sounded a little lonely.

“Boss. I joined you because you said you were headed to the site of a carjacking in Akishima, right?”

“But now that I think about it, why are you going to the site of a carjacking in a car?”

“If you’re going where a car was attacked, of course you’re gonna take a car.”

Boss continued his repairs as he spoke.

“More importantly, why’d you need to go to Akishima? You’re off duty today, aren’t you? Are you supporting the whole Babel thing?”

“No, I’m entirely single, so I have way too much time on my hands. I need to go to that Akishima department store’s atrium and spit on the couples flirting down below or get a feel of some girl’s ass.”

“That’s quite a specific master plan you have there, so it’s too bad I’m holding you up here. This is what you deserve.”

“It’s not like either of us has anyone to give a present to. I mean, you’re checking out the site of a carjacking on Christmas.”

After a dry snapping sound, the car sank down a fair bit.

“I got out the little bone that was caught in there. Now we can push it by hand…”

Then he cleared his throat a little.

“The thing about me is…I need to learn how to drive things like cars and motorcycles as soon as possible.”

I responded while putting up my feet in the comfortable and spacious seat.

“Do you have a reason for that?”

“A few. The time is coming when I’ll need to move faster than time.”

“I see,” I said without questioning him further.

As I looked up into the sky, I heard a voice from behind.

“What are you two doing? The last thing I heard you were headed to Akishima in the evening…”

I looked back and saw Snow Character wearing an overcoat and riding a ladies bike.

“I was curious and decided to stop by, but what is this? …Did the car break down?”

She grabbed the car’s trunk and activated her Mobilized Writing.

Anything a woman’s hand touches becomes a weapon.

She grabbed Boss’s car as a weapon and stored it in her breast pocket.

She bent her eyes a little and spoke with the distant electric guitar tone in the background.

“I will be taking this red car as a Christmas present from the two of you.

The Akishima department store mentioned here actually exists north of Akishima Station. In fact, it’s right next to the station.

The bridge also exists, but that’s getting pretty local.

Record 80: Everything About the Past[edit] 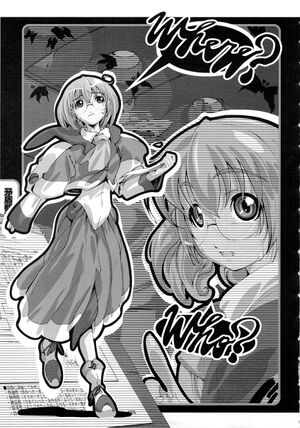 It was kind of dark inside a bomb shelter. Which wasn’t too surprising.

At any rate, our odd job for the day was to investigate the one that was discovered over summer break. If it looked usable, we could probably turn it into a living room for the Chancellor’s Officers since it was next to the Student Council Room.

I walked through the narrow passageway with a maglite in hand.

Lady was with me to record everything. She must have been worried because she asked a question.

“Um, is it just me or have a lot of things been passing by us?”

“Well, this bomb shelter has been forgotten about since the end of World War Two, so it’s desperately trying to fill in the holes in the memories. That way it won’t be lost to the people of the present.”

Lady quickly hid behind me to clear the way for something to pass us by. I looked back and saw her pushing her largish glasses up her nose.

“Did you see who just passed by? It was the sun. And it held a large paper bag.”

“Really? To be honest, I couldn’t see at all who it was that passed by.”

“Maybe this bomb shelter likes you. In Tokyo, it can’t exist unless it remains in someone’s memory, so it really wants someone to remember it.”

“But I’m not very smart. What if I make a weird assumption, create a memory that shouldn’t exist, and create a fake version of this place in my memories?”

“If it happens, it happens. Memory is power, so you just have to believe that it’s true.”

I turned around again and found a wall there.

Oops. Apparently there had been a real-time discrepancy between the internal layout I had seen and the one Lady had imagined and written to her memories. I quickly shined my light on the wall and saw an old metal door.

The door opened from the other side and Lady stepped in with her face pale.

“That was scary. I was searching and searching for you. For quite a while.”

“Sorry, sorry. I should have shined the light around more to give us a better shared understanding. Okay, let’s get going.”

Lady tilted her head when I said that.

“What are you talking about? …We’re outside.”

I looked around and found that we were indeed behind the school building. It had been morning before, but now it was evening. And Lady held out a piece of record paper that was filled with blue glow-in-the-dark ink providing the bomb shelter’s internal layout.

She looked between my face and the record paper.

“I omitted a fair bit on the way. Can you go get the missing parts filled in at the Time-Seer’s shop later?”

“If you want. More importantly, did you go all the way in? Did you find anything there?”

“There was nothing at all. Just a big room with something spray painted on the wall.

She smiled a little.

Lady appears. The map she’s holding is the first basement of a certain game, but it’s made so it works with the hidden doors, one-way pathways, and the rooms mentioned later on.

This is a little off topic, but I think there were a fair number of abandoned bomb shelters when we were kids during the early 80’s.