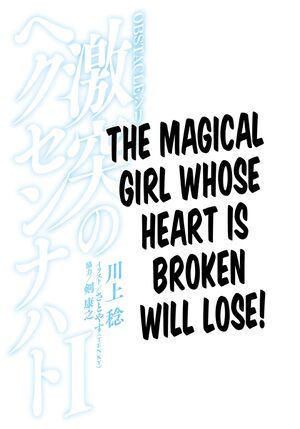 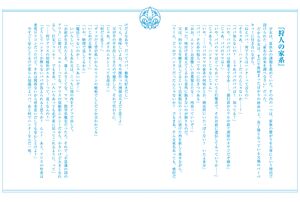 A girl was working on her summer homework. One assignment asked her to look into the origin of her family name to demonstrate the importance of family bonds.

That was why the girl asked what she did as she helped her father grill on a long stretch of beach that early afternoon.

“Probably because we were hunters.”

“You don’t know? Then what was your papa? Do you know that?”

“Well, my papa took on my mama’s last name. He worked at a bank until his alcoholism led him to run a bar.”

“Then what was your mama?”

“She was more the punching type, which you seem to have inherited.”

“Then we aren’t hunters at all.”

“Well… I think there might have been one in my mama’s family’s neighborhood. Yeah, I’m sure of it.”

“Papa, wouldn’t they be a complete stranger?”

She did. The problem was how she never got tired of it because he would change the seasonings each time.

He then added on some more meat marinated in the secret family sauce he had developed five years before.

“Hmm, I wonder where the Hunter name came from. Well, that name must only be for show. I love animals, after all.”

“Yeah, they taste so good. God must have been a genius to invent beef and pork.”

Her father held out his hand, so she shook it. She then asked something else.

“Then what about my name Elsie?”

“What do you think?”

“Since I’m short, the kids at school say it’s actually LC and short for ‘lolicon’.”

“I make sure to hit them when they do.”

That was apparently fine. At any rate, her father held out some different meat with a knife.

“When you were born, you were really small and your mama was a mathematical witch, right? So she named you Elsie based on Alice in Wonderland. Elsie is an abbreviation of Alice, so she was making sure you could grow big even though you were small. Is that getting into the giantess genre? Well, anyway, she was also hoping you would always come home no matter what might happen.”

“Why is Elsie an abbreviation of Alice? Isn’t it just as long?”

“Do you really think I’d know when I don’t know why we’re the Hunters? Hm? Also, Alice’s author was quite the pedophile, but that has nothing to do with your name so don’t worry if you remember that in the future.”

I won’t worry, but I didn’t need to know that in the first place, papa. And why are we the Hunters anyway? 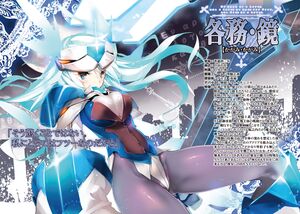 Spell Type: Whatever She Wants

Traits: Tall and wears men’s clothing. Her hair is white but has a hint of color, so it is thought to be her natural hair and not bleached. She always looks down on others, but that mostly comes from her way of speaking. When dealing with small animals or speaking with children on the coastal part of the city, she crouches down to put herself at their eye level, so she shows a lot of concern for others.

Her Combat Frame is the Holy Knight-style. That defense- and surface-oriented style is outdated, but she uses it to fly and rush at her opponent. Horinouchi calls that “cheating”, but witches have a tendency to cheat in the first place.

She has excellent combat skills. She predicts the overall flow of battle and then follows that flow with some adlibbing worked in. But those adlibs can be so crazy that they are hard to keep up with. Also, she can only pull off those absurd adlibs because of her special craft-style abilities. She has free use of the power to make whatever she wants out of anything.

“Do not look so surprised. For me, this is normal.” 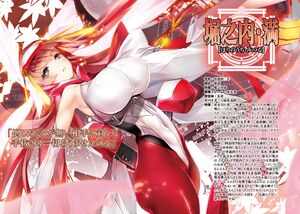 Traits: Shrine maidens have huge breasts. No one knows who came up with that universal law, but each consecutive representative of the Horinouchi family seems to follow it. Her mother, who was selected for the previous Hexennacht, did too, but come to think of it, a wife was standing on the front lines and calling herself a magical girl ten years ago. The headmaster was the wife-type too, so that seems highly inappropriate.

To get back on topic, she has a witch rank of 4 while also serving as Shihouin Academy’s student council president. The president is normally chosen from the general division because someone from that division can make public appearances more easily, but her rank has also improved the image of the normal division which tends to be viewed as the lowest of the divisions. After all, she is from the Horinouchi family that represents modern Japanese Shinto. Her Akerindou is said to outdo the higher rankers in pure physical attack power. You might be wondering why she is so attack-oriented, but she claims that is simply how things turned out when she focused exclusively on defeating her enemy. If you think of that as using any means necessary to achieve her goals, then it sounds very refreshing.

“I will not hold back in the slightest against an undefeated opponent.” 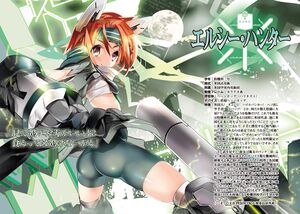 Traits: A foreigner! Cat ears! A pile bunker! A midriff-exposing karate uniform! Spats! She feels like a Kazoe-Yakuman with a ton of Dora piled on top, but she’s still the representative of both the special equipment division and the United States. The US is finally living in the future too, so with the US military backing her, anyone who carelessly challenges her is in for a rude awakening. By the way, she may use “attack spells”, but that isn’t the same thing as “seme spells”. Besides, only girls can use attack spells, so would that make the boy-only spells “uke spells”? We can’t have that. Not officially anyway.

To get back on topic, her witch rank is 3. American witches were originally known for mechanically constructing their spells, but our special equipment division has combined that trait with the techniques of witches from other nations. Her Hedgehog uses a unique acceleration spell that requires America’s assistance, but the solid structure making that possible was apparently largely based on the research carried out at the academy. Then again, she had a happy upbringing raised by her father, so she accepts how small she is, feels no pride in her high rank, and enjoys her sleepless nights in the special equipment division building with the others from that division.

“I recommend watching and being amazed. You won’t have time to be amazed if it hits you.” 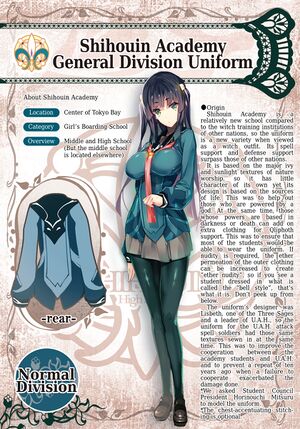 Overview: Middle and High School (But the middle school is located elsewhere)

Origin: Shihouin Academy is a relatively new school compared to the witch training institutions of other nations, so the uniform is a new variety when viewed as a witch outfit. Its spell support and defense support surpass those of other nations.

It is based on the major ivy and sunlight textures of nature worship, so it has little character of its own yet its design is based on the sources of life. This was to help out those who are powered by a god. At the same time, those whose powers are based in darkness or death can add on extra clothing for Qliphoth support. This was to ensure that most of the students would be able to wear the uniform. If nudity is required, the ether permeation of the outer clothing can be increased to create “ether nudity”, so if you see a student dressed in what is called the “bell style”, that’s what it is. Don’t peek up from below.

The uniform’s designer was Lisbeth, one of the Three Sages and a leader of U.A.H., so the uniform for the U.A.H. attack spell soldiers had those same textures sewn in at the same time. This was to improve the cooperation between the academy students and U.A.H. and to prevent a repeat of ten years ago when a failure to cooperate exacerbated the damage done.

*The chest-accentuating stitching is optional.