Chapter 7: But You Ran Away[edit] 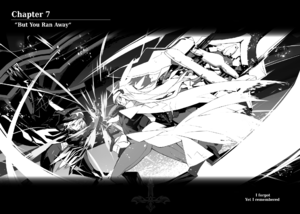 The battlefield was the five hundred meters passing each other by.

But the two of them clashed on the edge.

The long blade and shaft of their Magino Devices were scraping together, a wave of ether light surged up several dozen meters, and they did not bother with any impudent little spells.

Under those conditions, they struck at each other with their Normal Devices.

All the while, they ran toward the rear of the Device they stood on.

A swordfight broke out where they met at the scraping edge.

But the grim reaper would turn the blow aside and turn to the side to dodge with the least possible movement. She did not lean back because that would have removed her from the scraping edge.

The holy knight did not fall back either.

Kagami raised her voice while swiftly spinning around after sending out her blade and deflecting an attack.

“I understand that your world was destroyed! But…is it true? Are the director and all the secretaries really gone…?”

She did so while running, but she placed a hand on the ground racing by below her and instantly spun her body to launch herself back to her feet, all while giving Kagami a sharp look.

“Everyone was. Everyone. …Even the marshal that always supported you despite the trouble you caused!”

The shout and the attack came from low down.

It was a vertical slash that used the motion of hopping back to her feet.

This was the first time she had targeted Kagami from below during this high-speed exchange.

She had likely set this up. She had only attacked from the side so Kagami’s eyes would grow accustomed to it and then she suddenly switched to a vertical attack. Also…

“They all smiled as they died! …And as they gave me their magic power!!”

The words stabbed into her from below.

“You abandoned everything and fled! It’s time you paid for that great crime!!”

Mary gathered speed in her strike.

She had long arms and a tall body. She also used a flexible snap to provide even more speed to the long scythe.

Her opponent had just made a backhand swing of her sword, so her arms were almost fully spread to the sides, leaving her unable to move.

The triple scythe would slice her in three.

She only had to swing the blade up while making sure the tip moved fastest of all.

She hoped that it would hit, but she did not think it would. After all…

…I know this opponent!

I never once defeated her back in our world.

After that thought, she suddenly lost sight of the enemy before her eyes.

She had disappeared. No, that was not it.

The enemy had done something amid the scattering ether light of their Devices’ locked blades.

“She canceled her Frame!?”

Kagami had a plan.

…There are a lot of Device fragments scattering around here.

That gave her plenty of supplies for a Normal Frame at least.

So she gave a shout to Dikaio in the spell circle on her shoulder.

This opponent’s great “strength” in her world had been thanks to a certain ability.

…The free construction of ether!

She did not use the ceremonies and spells everyone else did.

She had the same power as the “god” that could make ether her own and play with it.

She was different from Mary.

When Mary had arrived in this world and learned about the techniques of “witches”, she had felt oddly relieved that they were so similar to the techniques of her own world. She had lost everything, but this had acted as a replacement for that loss.

But this opponent had not changed.

No, she had gained more information. But when Mary had seen her using and fighting with a witch’s Frame, she had forgotten something: this was a “god” merely acting like a witch.

After canceling her Frame, she was wearing a suit and floating in the air a bit.

But the momentum of swinging her sword remained in her body. She had been swinging a five meter sword, so with only the suit weighing her down, she spun back and to the right with enough speed to avoid Mary’s attack.

Mary raised her right arm while bending back.

The opponent in front of her opened her mouth while spinning.

It was an act of parting.

The holy knight spun in midair while summoning her Frame and making a horizontal strike.

At the same time, the grim reaper gave a shout and thrust her backwards-leaning body toward the ground in front of her.

She no longer tried to run.

The holy knight’s sword smashed two of the three scythes, but its own blade was severed diagonally.

Then the grim reaper’s great stomp shook her own Magino Device.

They both ducked low, but a valley appeared in the sky.

The two Magino Devices repelled each other and parted.

“Was she stronger because she followed my lead!?”

The speed was blatantly abnormal. The turn looked like sped-up footage.

She had made a few actions like that before. Thinking of it like a short dash, it must have been possible for her when certain conditions were met. But…

Kagami opened plenty of spell shields toward her opponent to use as cover.

However, they all disappeared and the sky came into view.

Mary gasped for breath with her right hand held forward.

Beyond the one surviving scythe, the giant sword had lost both its port and starboard sides. The central main cannon had already destroyed itself, so it lacked the attack power needed to defeat her.

In that case, she thought while standing up within the scattering ether light.

She raised her scythe again.

Just as she looked to her opponent in the distance, Kagami was also looking her way.

Their eyes met. It seemed like a coincidental moment, but…

Her opponent had not lost the will to fight.

Her thoughts led her straight to the answer.

Just as two fighters flew through the sky, a single attack arrived.

That girl’s arrow rose from far below and tore into her, ignoring the Device’s movements and the cover it provided.

It was a direct hit.

Hunter whistled at the conclusion in the sky.

“Horinouchi, I thought you specialized in pure attack power, but it looks like I was wrong about you.”

“Oh? It took you this long to figure that out?”

“Yeah. …You specialize in shooting people.”

“I-isn’t that just twisting it in a different direction!?”

But in truth, that had been ridiculous. Even with assistance from America’s fighters and satellite, she had hit someone on a quickly-moving Magino Device when she could not see them.

And the path of the arrow had been crazy.

…Mary would’ve noticed if she fired it up into the air and had it drop down, so she had it practically crawl along the Magino Device’s upper surface.

That seemed like too broad an interpretation of “precision guided”.

Plus, it had been really fast. By the time Mary’s servant had detected it in the Device’s warning range, it must have been too late to dodge it.

…Horinouchi’s too much of a crazy person to do it, but I bet she could use that to pull off sniper shots with a stealth spell active.

It was just like using the Hedgehog to fire from outside the enemy’s range of vision. That was why one had to challenge a sniper to a head-on battle. That had been part of her thinking in the previous Ranker battle.

And now a parting had been accomplished in the sky.

While Dikai-whatever fell toward the southeast side of Tokyo Bay, the black scythe came apart in a mist of ether light.

They were both sinking, but their damage was different.

Kagami’s Magino Device was practically destroyed, but Mary’s was not. She had only lost the controlling Normal Device thanks to Kagami’s attacks and Horinouchi’s arrow.

She would be injured herself, but it really came down to the loss of control.

Of course, she could regain control and continue the fight, but…

“If she does that, I will be her opponent.”

Horinouchi was untouched, so taking her on would be a poor decision. That may have been why the black multi-scythe descended beyond the clouds that trailed and scattered behind it.

That would likely take her to Shihouin Academy in the end, but this was a Ranker battle. If she returned to the academy to reset everything, that would count as the conclusion. Also…

A bell rang over Hunter’s cry.

Kagami’s Magino Device had fallen into the abandoned buildings to the southeast.

Horinouchi ran over to the crash site and saw the fighters passing by overhead in a wide turn back toward Atsugi.

While silently thanking them, she knew she had to hurry.

Hunter had already sent word that she had found Kagami.

She knew where to go because it was where that giant Dikai-whatever had crashed. A blizzard of ether light was rising into the sky.

The moon was there.

If the Black Witch had seen that battle, what had she thought? That was a battle between her sister and the survivor of a world she had destroyed.

…Maybe this too is a part of the story she’s made.

She stood on the road in front of a smashed abandoned building. The summer afternoon sun warmed that broken asphalt where grass grew through the cracks.

Kagami wore her Normal Form with Hunter at her side in her school uniform.

But when she noticed Horinouchi, she canceled the witch outfit.

She took a light step and returned to her usual suit. And…

Horinouchi could say nothing as the girl sighed and relaxed, but the sound of the fighters tearing through the distant sky reached them.

Kagami opened her mouth, looked up into the sky, and placed a hand over her eyes.

“How could this happen?”

Something that reflected the sunlight dripped down from below her hand.

She was crying. Just as she had in the setting sun before, she cried below the hand blocking out the afternoon sun.

“The world brings such cruel karma.”

Horinouchi could only watch as Kagami shed her tears.

The unofficial Ranker battle had an incomplete ending.

From what Horinouchi heard, Mary had returned to Shihouin Academy after canceling her Device and had received quite a talking to from the headmaster about splitting the artificial island in two.

Meanwhile, Horinouchi and Hunter had collected exhausted Kagami and had a US Navy hovercraft take them back to the academy, but Kagami had seemed absentminded the entire time. Horinouchi had known she needed to snap the girl out of it, so she had shoved her into the gym’s shared bath and forced her to take a break.

Kagami had visited the sauna after taking a long bath and then appeared in a new suit she had been storing somewhere. As soon as she saw Horinouchi, she had said the following:

That had seemed odd for someone who always made the first move, but she was likely still in shock over Mary’s identity.

That was precisely when they had both received an email from the headmaster. It was of course a request for a rematch from Mary, and…

…Tomorrow afterschool? She sure is eager to get this over with.

Perhaps she wanted to do this before Kagami’s mentality had a chance to recover. In that case…

“Fine. Let’s make use of the time we have to prepare for tomorrow.”

With that, Horinouchi took Hunter and Kagami (whose gait seemed a little weak) to her room.