Chapter 2: Not Even Worth Bargaining Over[edit] 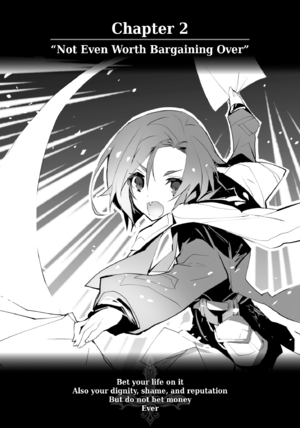 Bet your life on it

Also your dignity, shame, and reputation

But do not bet money

On the dining hall terrace below the blue sky, Horinouchi saw Hunter make the first move.

She slammed some A4-sized papers on the table and announced her actions.

“I summon Modern Japanese in the attack position! But I use a special summon for the similar Classic Literature! And I summon one more face-down for defense!”

Just as Horinouchi prepared to ask what this all meant, Mary placed her own papers on the table across from Hunter.

“Then I summon this #1-in-my-year Spells in the attack position. …And I special summon one in the face-down position. Do you really think #2 or #3 stands a chance against #1? Attack!”

“Not so fast, Horinouchi!” said Kagami while raising the tray that held her lunch. “Two warriors are betting their pride and who pays for our lunches!”

Mary looked to Kagami’s tray and the food it held: a mountain of burgers, ice cream and adzuki beans in a cup (known as the dining hall sundae), ham, and salad.

This unique brand of anger made her feel somewhat homesick, but she was pretty sure this was a form of power harassment. However, Horinouchi spoke up with a hot sandwich, fried chicken wings, and even a fruit salad piled up on her own tray.

“I guess it can’t be helped then,” she said with a sigh.

…What does that mean!?

Was she accepting that either Mary or Hunter would have to pay? Or was she exasperated that the two girls would go that far to pay for her lunch? Regardless…

…What kind of flowers does she have growing in her brain!?

A bet did seem like a good way of taking the competition seriously, but that “it can’t be helped” made it sound childish.

Mary felt like she was being belittled in an unexpected way, but as for the child across from her…

Hunter even clenched her fist, so Mary wondered if she was on the same level as the girl.

But she was more curious about the contents of Kagami and Horinouchi’s trays. Not only was there a lot there with the hamburgers and salads and such, but…

…Do you two not order anything to drink!?

As soon as she wondered that, Kagami seemed to realize something.

“Oh, no. Horinouchi, how about this? …Okay, you two. Let us say that whoever loses also must go down and buy us each a drink.”

Is there just a part of this world’s grammar and expressions that I don’t understand?

Mary heard some comments of “they’re monsters” from their surroundings, but Kagami had something else to say.

“What is the matter? You just have to win, don’t you? It is only natural for the loser to feel frustrated.”

Hunter made a counterattack.

…I have a trick up my sleeve!

Just look at the exam I was holding in reserve.

“I use my #1-in-the-year Shop exam to counter your #1! I then attack with my #2 and #3 Modern Japanese and Classic Literature!”

“In that case…” Mary flipped over her face-down paper to place it in attack position. “I scored #1 in both Spells and Spell History, so I can counteract your Modern Japanese and Classic Literature even if I allow you supplementary lessons!”

Meanwhile, Horinouchi and Kagami had left their trays with the butler and they placed some papers over Mary’s.

One of them placed one and the other two.

“I scored #1 in Practical Spells which focuses more on battle than the spells themselves.”

“Th-that means you tie with us or at least make for a worthy opponent!”

Horinouchi sighed for a third time, let her shoulders droop, and pulled out another paper. Kagami then placed another paper on top of that.

The forms were identical.

It was the exam for….

“And I was #2,” chimed in Kagami. “Your exams would have covered the same topics, so how did you two do in makeup, cooking, and etiquette?”

Mary threw her hands up in the air, but the Rank 4 collapsed to her knees, so Mary felt that made this her victory.

“How is it fair using etiquette when it’s mostly based on Japanese standards?”

“And makeup is dangerous for the Spell Division because it’s treated as an emblem, so we barely ever use it.”

“Oh, look at that, Horinouchi. We order our drinks and all we get are grumbling complaints. …Remember, we both need a drink.”

“Don’t take it too far,” said Horinouchi while holding out a hand to stop Kagami. Then she started eating the lunch at the table.

During the post-exams break, she and Kagami had visited Yokohama and Kawasaki and prepared for Halloween, so she had not eaten the academy’s food in a while.

The school that the academy had been based on had had a business partnership with a hotel restaurant. The hotel itself had gone out of business after Hexennacht, and…

No, she was absolutely certain of it.

Well, it was officially an abandoned building in the off-limits zone, she rationalized.

Even if the flavor had changed a fair bit since then, it was still more than enough for a lunch.

She quite liked the hot sandwiches here. The fillings were placed between two pieces of toasted bread and then a special grill was used to lightly toast them a second time, bringing the bread and fillings together. She also liked how the bread tasted more like roasted wheat than just toast. She could think about all of this because…

…I have the time to stop and relax.

During the exams, her thoughts had been focused on scoring as many points as she could. The goal of the exams was to give them knowledge and countermeasures, so it was easy to know what would be covered.

But that was not true of her next task: the Ranker Battle. They had to fight the mysterious Rank 1.

There was nothing but unknowns there. But was she anxious?

She felt like their recent preparations and relaxation had been more about being able to concentrate than about taking a break.

“Starting tonight, we should be busy going over our spells and putting together what information we have for the next Ranker Battle.”

“Eh? Then when are you doing that Halloween party?” asked Hunter.

“What?” asked Horinouchi with a tilt of the head.

She snapped her fingers and Koutarou walked over. He already had two costume cases in his hands.

She pointed to them.

“It’s about to begin down below. Hunter…and Mary too, are you two emptyhanded?”

“I wasn’t informed either!”

Hearing that protest in stereo, Horinouchi turned to Kagami.

“Hm.” Kagami crossed her arms and solemnly stared into the distance. “There must have been a breakdown in communications. …But it would probably be best for all involved to not investigate who is at fault.”

Horinouchi glared at her, but she doubted it would have any effect. She was worried about what was to come, but this would be over by midnight. However, Hunter spoke up while Mary started calculating something with a calculator spell.

“Well, I’m fine with going in wild, but you said it’s happening down below?”

“Yes. It is primarily being run by the General Division. Then again, it is really just an official school costume party. Actually name it after Halloween and it could easily trigger some kind of ritual spell. …Now, let us enjoy the festivities.”