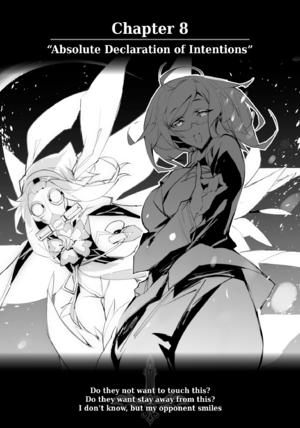 Do they not want to touch this?

Do they want stay away from this?

I don’t know, but my opponent smiles

The blue and white gunblade pointed toward the tall Magino Device from which the glowing flowers spread.

Horinouchi wondered if the Rank 1 was there.

She was on top of the Magino Device.

She stood on top of one of the three blades spread out like leaves atop the standing hoe-shaped Device.

She was hard to see from this distance, so Horinouchi used a telescope spell. The spell circle was accompanied by four American U.A.H. spell circles.

…This shows the situation from above and provides data on the density and speed of the spreading flowers, doesn’t it?

It was the data taken by those circling in the sky. Some of it was quite comprehensive, so she could tell Atsugi was assisting with the data processing.

Just as she wondered what she was supposed to be seeing, another four spell circles appeared. They all provided close ups of her and Mary.

“H-how many planes do you have flying upside down up there!? And Hunter, this one from below is you, isn’t it!?”

“I get paid for cooperating.”

The girl was impressively shameless about her motivation, but if American U.A.H. was doing all this…

…European U.A.H. must be communicating with the Headmaster.

With that thought, she nodded toward Kagami.

She thought this was a good time to end this conflict.

But when she looked over, Kagami was lying down on top of her Device and pointing a photography spell toward her.

You don’t have to bow down Dikaio. This is your master’s responsibility.

“Now, then.” Kagami swung the control Dikaiosyne forward once more. “Lady Headmaster! I would like for the Rank 1 and European U.A.H. to end this conflict! After all,” she continued. “Her official opponent is us!”

She pointed to the girl standing on the tall Magino Device a kilometer away.

She had referred to the gas mask girl as “her” and she used the same pronoun once more.

As soon as her raised voice traveled across the sky, her opponent took action.

While standing on the hoe Magino Frame, she opened a spell circle.

Was she speaking with the Headmaster? But that must have only lasted a few words because the girl suddenly raised both hands.

At the same time, everything around her turned to fragments of ether.

The air, the forest, the scattering flowers, and even the noise scattered as fragments of ether.

The sound of shattering glass started as a wave. By the time Kagami turned toward Horinouchi, it had grown into the great reverberation of a waterfall as it raced through the sky.

She seemed to have rewritten the world.

The Rank 1 had canceled her spell.

Hunter saw two actions as the falling and dancing ether light fragments washed over her.

Second, the tall Magino Device to the north also shattered and self-destructed.

But the Rank 1 was still there.

She dispelled her Magino Form and stood in midair.

She was standing on the hoe Device that Mary had supposedly split before.

…Well, she is from the Honors Division.

It was less about power than about being incomprehensible.

As rumored, the Rank 1 was from the Honors Division.

The Honors Division building was probably located directly below her.

“This really is a blizzard of flowers.”

Just how much ether was in the air?

The density had dropped, but the fragments of light never seemed to fully vanish as they continued dancing around the area.

What did it all look like to the F-23s flying overhead?

But as the sky was returned to normal, a new light appeared there.

It was the Headmaster’s voice.

In the courtyard, on the school buildings, inside the buildings, and – most importantly for her – on the roof of the General Division building above her, spell circles appeared to display the Headmaster’s face.

She was in the sky.

Hunter could see two people on top of the distant hoe Device that had fallen onto its side. The Rank 1 was on the left and the Headmaster on the right.

That’s a neat trick, she thought as the Headmaster looked out at her from the footage.

“Yes, that is our intention.” Horinouchi placed a hand on her chest. “After all, the Ranker Battles determine which witch is chosen for Hexennacht. That is the privilege given to Shihouin Academy, we have been presented with an opportunity to exercise that right, and we intend to do so.”

“If any power would interfere with that, we must fight back.”

Horinouchi turned around to face the main gate.

She looked to Lisbeth there.

“Now, the conflict has ended for the time being.” She spoke to Lisbeth and the other European U.A.H. witches behind her. “From now on, we and the rest of the witches here will respond if you attack. Do you understand?”

It began as shadows and grew into countless sounds and presences.

More and more people appeared from behind the school buildings, in the windows, on the edge of the roofs, and behind or in the trees.

They were witches. All of the witches of Shihouin Academy made an appearance.

Horinouchi stood in the lead, but she simply stared at the European U.A.H. Representative without turning back toward the others.

“What do you say to that, European U.A.H. Representative Lisbeth?”

The witch representative from Europe made a single movement.

“Let me ask one thing. …To Student Representative Horinouchi Mitsuru.”

…She really has guts to not be intimidated here…

As Hunter thought that, the European U.A.H. Representative asked her question.

“Do you intend to become the Rank 1?”

“I see.” The European U.A.H. Representative nodded once. “In that case…we can speak again once you are the Rank 1.”

“Until then, U.A.H. shall protect Shihouin Academy.”

Horinouchi heard cheers behind her.

…That puts that problem off until later.

They had not actually solved the problem.

But Lisbeth had chosen her to negotiate with at a later date. Of course, that was on the condition that she and Kagami became the Rank 1.

But the current situation was over. Hence the cheers.

…But what does this mean?

She had a question.

Why had Lisbeth chosen her and Kagami becoming the Rank 1 as her condition?

“She seemed to be saying she wishes for us to stop the Headmaster and that girl over there.”

Kagami sent that quiet comment and Horinouchi had to agree.

…So Kagami is curious too.

With that in mind, she wanted to ask Lisbeth why she was supporting them.

The focus of Hexennacht was achieving victory over the Black Witch, so it was best to support the more powerful witch and it made little sense to hope anyone in particular would take the #1 spot.

However, she was not given time to ask about that.

“Very well,” said the Headmaster in the spell circle in the sky. “Then let’s do that.”

…Is that really okay?

That was awfully obedient compared to the initial rejection.

Something was not right.

Combined with Lisbeth’s previous condition, it felt like those two had some kind of hidden understanding.

But the Headmaster continued as if to ignore Horinouchi’s doubts.

“First, please fall back, Lisbeth. At the very least, I do not intend to welcome you as a guest or as an academy official as long as I hold the position of Headmaster.”

What would the European U.A.H. Representative do now that she had been told to fall back? The other U.A.H. witches and the Shihouin witches gave her looks of doubt and curiosity.

Lisbeth sighed in front of them all.

“So you are prepared to go that far.”

“As I am now, I must be prepared for anything I might do.”

“But.” Lisbeth looked around. “Are you okay with the way things are now!?”

“We had a promise, Lisbeth.”

Horinouchi did not know what “the way things are now” meant.

But she heard a quiet bitter laughter. It came from the Headmaster in the spell circle. Her shoulders shook and she pulled the Rank 1 toward herself atop the Device.

It was not quite a hug, but she did pull the girl right alongside her.

“Listen. The Rank 1 and 2 will have their showdown early tomorrow morning.”

That was half a day away.

…That doesn’t give us much time.

Did the Headmaster not want them to have time to prepare?

But Kagami suddenly tilted her head. She pointed her right index finger toward the Headmaster and Rank 1 in the distance instead of at the spell circle.

“Lady Headmaster.” She asked a question. “Is she who I think she is?”

The Headmaster nodded with a smile while the Rank 1 removed her gas mask and hid behind the woman.

Her face was revealed.

It was the girl who had passed by them when they were throwing out the trash earlier.

But the Headmaster placed a hand on her shoulder and smiled.

“This is Shihouin Fleur, my daughter.”