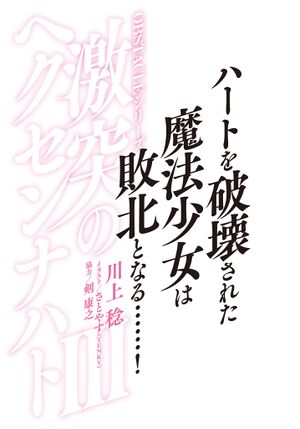 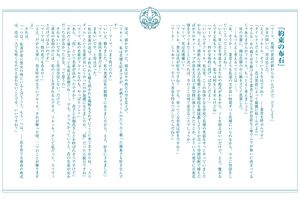 “Mama, I’m not going to finish tending to the flowers. What should I do?”

The girl’s mother answered her question.

“Well, Fleur, when that happens…you need to call a florist.”

“You sure are direct, mama! But it’s the care you show the flowers that make them pretty!”

“Yes, but the care of a florist has got to be more thorough and consistent than that of a mother and her daughter, don’t you think, Fleur? You need to think these things through.”

Hearing that, the daughter stuck her hoe in the flower bed and thought.

…What does thinking this through mean?

“Oh, I get it! We can stay in the flower garden longer than a florist, so we need to look after the buds!”

“No, we have spells for growing flowers, so we just have to use those. We are witches after all, Fleur. Not that I’m going to do anything.”

“Mama! I feel like you’re leaving all the work to me!”

“I’m allowed to do that, Fleur. I spent a long time taking care of the flowers back at the school that became this one. Everything is so much safer now, compared to when I had to protect the flowers night and day from idiots who drank too much and passed out or idiots who would announce they were revealing a new special attack, slice through space itself, and send around five hundred newly-planted tulips into another dimension.”

“Mama, do you actually hate flowers?”

“Wow! Then are you saying you crushed those bugs!?”

The mother did not nod. She simply looked up to the sun that was beginning to sink into the west.

“Fleur, I love flowers, but I also love alcohol and sweets with plenty of cream on top.”

“No, I won. Because my hunger was under my control. Yes, I used it to my heart’s content.”

“Well, whatever,” said the mother. “The flower I am named after comes here without being picked, pierced, or sliced. Perhaps how difficult Cerisier is to pronounce gave me a divine protection. Sakura probably wouldn’t have been enough.”

“Mama, is that why my name is Fleur?”

“Oh? Would you have preferred Hana? I get the feeling you would have been called Hanako or Ohana-san.”

“Using that line of reasoning, being named Mitsuru or Man would be a real tragedy… But if I had to choose, I think I would have preferred a name with Hana directly in it.”

“That would have been nice.”

Her mother did not deny it. But…

“I am included in your name, Fleur. And I am more than just Cerisier.”

“Are you some other flower too, mama?”

“Yes. So treat those flowers with care so they will blossom, Fleur. Once you understand that, you will understand two more things.”

“First, we are always with you. And second…the greatest spell for growing a flower is to never forget that flowers can bloom on their own. Okay?” 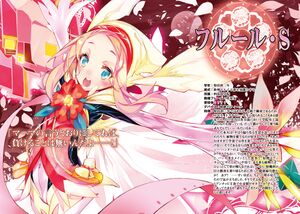 Spell Type: Based on the European Druid Style

Traits: She is in the third year of the Honors Division, but she is so short and skinny that she appears to be in the second or even first year. However, certain aspects of her skill are the greatest in the academy’s history. I mean, think about who her mother is and what spell she uses.

But she seems to have lived a strange life. She loves flowers, but she takes it so far that no one has ever seen her eating plants in the dining hall. You might think that makes her an exclusive meat eater like that karate user Elsie Hunter, but that is not the case. Then what does she eat? Primarily bread and rice and her favorite food is anchovy pizza. But wait. Wheat and rice are both plants. If it’s fine as long as she can’t tell what it originally was, would she drink the green health shake that the Special Equipment Division uses to get through their all-nighters? Well? Hm!? …Sorry, that was so unreasonable I lost my cool for a second. Yes, I’m not going to let her say the anchovies are the main dish and the flour is only the side dish. And I’m getting off topic, so I think I’ll end this here. 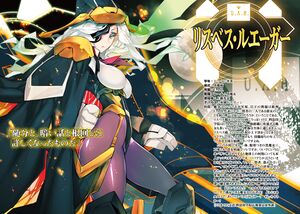 Traits: Witches are eternal teenagers. The current problem is what to call this member of the Three Sages who is now the representative of European U.A.H. Lady Lisbeth is probably what they call her there, but Shihouin Academy is not U.A.H. and a lot of our witches belong to other organizations, so it wouldn’t work for everyone. Mistress Lisbeth seems to establish a hierarchy and is a little…y’know. Older officers are just a pain in general.

And what is this anyway? An eyepatch-wearing black witch who uses two swords? How old does she think she is? And if you call her middle-aged, she apparently shows up to correct you no matter where you are on the planet. Call her an old lady and she suddenly appears behind you. What is with the Three Sages? How petty are they? But it is thanks to those people’s protection that the world was only partially destroyed ten years ago, so maybe that says something about the world as a whole. Oh, and if you call her “big sister” she looks at you like you’re absolute scum. Then what are we supposed to call you!? “Miss Lisbeth”? Is a witch like you really satisfied with something so normal!? Then are we supposed to just casually say ‘Hey, Lisbeth’? Really?

“I have become very familiar with dark topics and groundwork.” 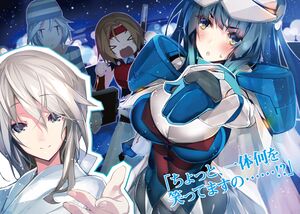 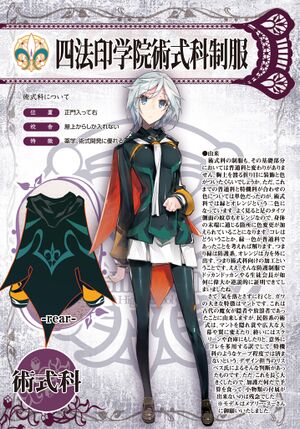 About the Spell Division

Location: To the right from the main entrance

School Building: Entrance is on the roof

Now, to keep going before I depress myself, the most notable trait is the cloak. It has its origins in the ancient witches who were hermits or wanderers, but the Spell Division uses a lot of folklore and can turn the cloak into an invisibility cloak, a large tent, wings, or even a screen or storehouse, so it has a surprisingly broad range of uses. That may have been what its designer, Miss Lisbeth, meant when she said it would be more than the Special Equipment Division’s mere cape. But by increasing its length and size, it eats through your divine protections and the weak unfortunately cannot use it.