Chapter 14: You Shall Cut the Light[edit] 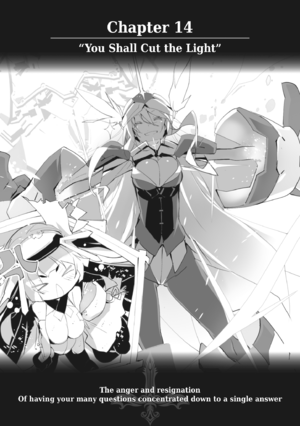 The anger and resignation

Of having your many questions concentrated down to a single answer

It was a very philosophical question. And since Horinouchi had asked it, she could assume there was real meaning to the question. So…

“Is there any reason to wait?”

Show some patience. But this must mean she is expecting something of me. In that case…

“Could you give me a hint?”

Horinouchi responded by pointing behind Kagami. Kagami looked in that direction and saw the badly-destroyed city of Kamakura and…

That giant black humanoid Device stood there with two swords.

She realized there were also battles being fought all around them. The Black Witch’s minions continued to fall from the sky. The explosions of light and sounds of destruction were primarily to the west, but they were getting closer.

“It would seem I arrived in time for the peak of the festival.”

“Sorry about the wait, everyone. This is where things truly begin.”

Horinouchi smiled bitterly at what Kagami said in the middle of the battlefield. That girl was as haughty as ever. But…

“You made us wait far too long, Kagami.”

“Yes, and I feel bad. But my dream lasted a little long.”

That was right. Kagami was supposed to be trapped in a “dream”.

“How did you escape the dream?”

“It was simple. I might have been asleep, but someone outside the dream woke me. …Horinouchi, I heard your voice: ‘Help me, Kagamiii!’ Yes, it would have been an insult to the Kagami name if I had not answered your cry!”

“I said nothing of the sort.”

“Now, now. There is no need to be embarrassed, Horinouchi! I felt a squeezing in my chest when I heard your heart’s voice!”

“My heart didn’t say it either!” she responded, but she belatedly realized just how much Kagami must have been thinking about her.

Horinouchi was considerate enough to realize that. So…

“What will you do now, Kagami?”

“Well, first there is one thing I want to check on.”

Horinouchi was not sure if the Black Witch would respond, but she did so.

“I was just wondering what you had named that rip-off of a Frame you copied from Horinouchi’s mother. You might have said it before, but I haven’t had a chance to hear it.”

On Horinouchi’s spell circle, Hunter was holding up a spell circle with “Don’t provoke her!” written on it. Oh, Hunter doesn’t know how to write that kanji. I know how. But the spell circle also showed Mary moving her right hand in a circle to say “Wrap it up! Wrap it up!” and Horinouchi had to agree with her.

But after a breath, the response arrived.

She had said it. Shouko had definitely answered her sister. And her sister tilted her head.

“And what does that mean?”

“Shouko… Is the Black Witch the devil? No. She is not, is she? She is simply a witch decked out in all black, right? That is at best Queen-style. …So why are you calling yourself satanic?”

Umm, she thought before realizing something.

“Wh-what does it matter!? That’s just how it works in this world! Isn’t that good enough!? Besides, what are you calling your big Frame!?”

“This one is known as the Geo Frame.”

“Huh? Geo isn’t even an adjective. Besides, isn’t Geo an earth goddess? It’s true a Shinto shrine maiden will have local deities tied to the earth, but isn’t it weird to call it Geo?”

Her sister used her large sword as a staff and tilted her head.

“That is why you have hit your limit here.”

“Even after everything you told me about her,” said Amaze. “I didn’t realize just how unreasonable your sister is.”

“Right!? Right!? I wasn’t lying! Everything I said was true!”

“Actually, you might be about as bad as her…”

“Nooo! Not even this book will take my side!”

She had a lot of opinions here, but…

“Shouko. …It is time to say goodbye to the Book of Creation there.”

It must have seemed sudden.

Kagami would not demand she part with the book. Nor would she force her to. She did not intend to wield her power as a sister. Forcing it with her authority would only lead to the girl relying on something similar in the future. Thus…

“You, Book of Creation. Amaze, was it? It seems you can speak with me here. This conversation should have shown you how unreasonable I am, and that will not change.”

“Are you saying you can sever the bond between Shouko and me?” asked the book. “Shouko wanted me. Even if you destroy her Phlogiston Heart and sever our bond using this world’s rules, that will only last until her Heart recovers. It will ultimately return to normal.”

“That’s right. This can’t be changed by force,” said her sister. “And I can’t beat you, Kagami. But when I’m with Amaze, I’m the Black Witch and she’s far more powerful than you.”

“So the question is how we can win,” said Kagami.

Horinouchi stood next to her and raised her hand.

Kagami knew what she was going to do, so she took her hand.

“Our imagination will defeat the Black Witch, correct?”

“This is mostly due to your influence, you know?”

“Your heart belongs to you, Horinouchi.”

Horinouchi, smiled a little at that. And so they spoke in unison: