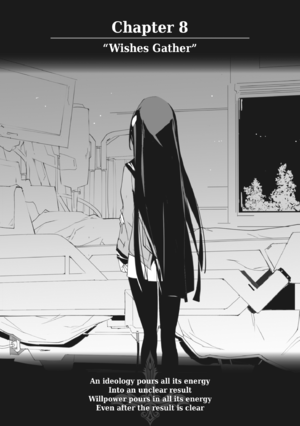 An ideology pours all its energy

Into an unclear result

Willpower pours in all its energy

Even after the result is clear

Fleur could tell she had been caught in the middle of something big.

The day before, she had been trying to meet up with Kagami’s group, but she had apparently guided the Black Witch to them instead.

She had returned to Shihouin Academy to find something like a night-long party and she had spoken with Lisbeth in a tent in front of the main gate. However…

“So that’s what happened…”

After Fleur explained everything, the woman had sighed and hung her head quite deeply.

Horinouchi, Hunter, and Mary had also been called in, so she had re-explained a lot.

Those three and Lisbeth had all asked for details about the Book of Creation that Shouko had. After comparing her information with what Kagami had told them, they concluded that it was all accurate. As long as Shouko had that, she could threaten this world using creation as a weapon.

But what were they going to do?

“As long as she and the book are in agreement, they can’t be separated unless we defeat the Black Witch,” said Horinouchi. “That means we have to surpass her imagination to make her give up on her imagination.”

“So that’s what your attack power is for…”

“Yes, that’s gotta be what her attack power is for.”

Horinouchi had glared at the other 2 Rankers, but Fleur was pretty sure they were right.

But while she was talking about Shouko the second time, she had said the following:

That had caused Horinouchi’s eyebrows to rise, but then she had gulped and nodded.

Fleur had expected her to insist the enemy could never feel that way, but she did not.

That was a relief. If Fleur saw Shouko on the battlefield, she was not sure what she would want to say, but as far as Hexennacht was concerned…

She had her issue with her mother and she felt like Horinouchi and Kagami had taken Hexennacht from her. The best way to bear with how low that made her feel had been to remind herself that she had lost her mother and her power, but…

“…This is in your hands, Horinouchi.”

She now felt she could leave this to Horinouchi since that girl felt the same way about Shouko.

She was also worried about Kagami’s condition and, since things were going to get dangerous with Hexennacht moved up a day, she had considered returning to the dorm first thing in the morning. However…

“Um, not quite.” Lisbeth snapped her fingers. “We have witches who specialize in drain spells. However, the process for drain spells is a bit of a pain and they are nearly useless for attacks. But on the battlefield, there will be plenty of witches who overused their spells and ran out of Blessings. …Do you see what I’m getting at?”

“Can we use drain spells on you to redistribute your excess Blessings to the other witches?”

At any rate, Hexennacht was set to begin at 10 PM.

According to the spell circle clock, everything would begin in another 2 hours.

When is she going to wake up? wondered Horinouchi.

She stood in a white room. Something a lot like this happened when we fought Hunter, didn’t it? she thought, but this was much worse than that time.

She looked down at someone without even bothering to sit in the chair.

“…Kagami? They tell me you’re dreaming.”

Kagami lay in the bed while a few spell circles stabilized her condition.

She was fine. She had bandages wrapped around her in places, but below the blanket, the stab wound in the center of her body had completely vanished. According to the medically-advanced European U.A.H.’s medical division…

“Hell, yeah! We got it closed up! But should we put a strength-stone or something inside!? Or make something grow from her!? How about it!?”

They had gotten a little overexcited, but Koutarou had smoothed things over with his persuasion skills. One of them had been an acquaintance of a Horinouchi family witch, so the healing of Kagami and the exchange of information had been completed quickly.

Her body was there and her injury had been healed.

But there was a problem.

“What are you dreaming about?”

Some kind of attack had influenced the ether forming her body and her mind, locking them both in a state of dreaming.

So even if they tried to harm her, no real weapon could do so.

An ether attack would be weakened, but it would still work well enough. So the only way to affect her through normal means would require equipment extracted “from a dream”.

Hunter had tilted her head when she heard that.

“If she’s basically invincible…does that mean we could break through anything if we fired Kagami as a shell?”

“Her body is still as soft as ever.”

“You touched her, Miss Horinouchi?”

Why did they have to glare at me for that?

At any rate, it had been an Eastern European witch that had detected this and she had claimed it was “a super powered-up version of the fairy tale situation where the princess was awakened by a kiss from the prince”.

“Super? Just how super are we talking about here?”

“Well…it’s just quite super is all. Yes.”

The doctor had avoided answering like that, but it seemed Kagami’s mind was active in her dream.

The final conclusion was that she would wake up once she was done dreaming.

“But you didn’t wake up. …And Hexennacht is starting in 2 hours.”

Horinouchi stood by the window, spread the blinds with her fingers, and viewed southern Tokyo Bay.

She saw the bay and the coast as night fell.

This was the medical building on the south end of Shihouin Academy.

The view from the window showed several Magino Frames summoned above the bay and the moving beams of searchlights. The 7th Fleet and a JSDF fleet were arranged to form the barrier in the center of the bay. While European U.A.H.’s Magino Devices had been the only ones in the sky earlier, there were now some Devices from a group of volunteer witches.

And at the center of it all, something could be seen in the full moon which floated at the midpoint of the heavens.

It was a shadow.

No, it was not just one giant shadow. Countless tiny shadows surrounded the moon like a sandstorm.

“The Black Witch’s minions. Her reinforcements.”

It was a swarm of black dragons and black dolls.

As she looked at them, Horinouchi nodded and then looked to Kagami once more.

“Your dreaming must be a kindness from your sister. …Even if this world is destroyed, it will not happen in your dream, so you will not be destroyed along with us and you can continue to the next world.”

“The Black Witch must intend to defeat us and take you with her as she moves on.”

…This really is complicated.

The older sister was a lot of trouble, but the younger sister seemed to be a handful as well. However…

“When you next wake up, Hexennacht will probably be over. Hopefully, we’ll win. But if we don’t…you will journey to yet another world.”

“Farewell, my precious guest. If possible…”

Once she said that, something caught her attention.

I was getting a little carried away with what I was saying, but was I about to say what I think I was?

She looked around to make sure there was no one else here. She could not detect anyone hiding using stealth. Dikaio had been standing on the side table, but it had tactfully hidden behind the flower vase.

…What a clever servant!

I’m glad it left. Or am I? Well, I suppose so. And after having the stage set so perfectly, it would be wrong of me not to play my part. So…

When their lips met, her hair fell down on the right and she had to brush it back up with her hand. She felt that proved how inexperienced with this she was.

She moved away and felt a single teardrop fall from the corner of her eye.

“I’ll be going. There is so much I want to say, but that will have to wait until this is over.”

It turned out a kiss would not wake Kagami.

Feeling a somewhat disappointed sense of relief, Horinouchi turned her back on the girl.

Kagami would be safe even if the world was destroyed. But Horinouchi had a job to do.

“I will stop your sister.”

The seal to resist the Black Witch had been formed. The barrier spread out to envelop the ocean off the coast of Kanagawa and it was pointed toward the moon. Once their opponent’s presence was confirmed, it would be linked to the barrier already surrounding the moon. That would bind the territories of the two sides of the battle.

This time, the seal would not block ether. While inside that, Horinouchi would be able to receive a near limitless supply of ether.

A barrier-strengthening installation was linked to the shrines and temples around Japan. It appeared as a blossoming flower that enveloped Akerindou from below. And with the barrier as a focal point, all of the shrines and temples could install additional spells which would also increase the defenses of the surface. By ley line strengthening Japan, it would become a powered nation that would take only a third of the damage if they were hit by the same kind of attacks as 10 years ago.

And while that plan was put in place, there was movement in the air close to the surface.

European U.A.H.’s Magino Frame unit had increased to a total of 1500 thanks to an extra 500 sent in from Europe. They were flying around to protect the area around the barrier and to intercept attacks from the sky.

Next, the volunteer witches from Shihouin Academy and other U.A.H. branches rose into the sky on their Magino Devices. The men and witches who could not summon Magino Frames and the witches who had decided they were more effective with their Normal Frames had all moved to their assigned positions.

At 10:05, the lead 50 of the European U.A.H. Magino Devices aimed diagonally up at the moon from a position approximately 500km above Tokyo Bay, placing them near the top of the earth’s thermosphere.

After that, a second wave arrived at the same altitude from off the coast of Kanagawa. Once they targeted the moon from almost dead ahead, the specks on the distant lunar surface slowly moved in response.

The black dragons and black dolls that formed the Black Witch’s reinforcements began to approach the earth.

The black multitude moved out ahead of the witch.

While waiting in Shihouin Academy on the surface, Lisbeth gave her instructions.

As she ordered, a total of 300 lights flew toward the moon, as if to connect the two heavenly bodies.

No one knew how many times Hexennacht had been fought, but this time it began with a preliminary skirmish.