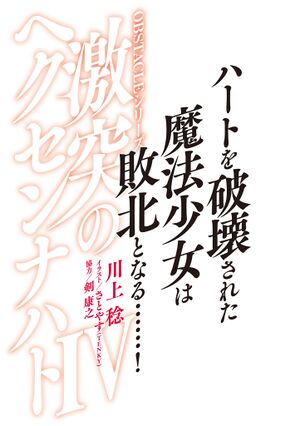 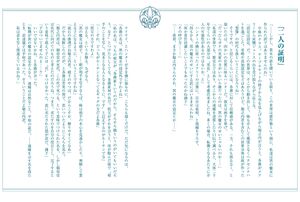 “But from what you’ve said, we weren’t really created by the Black Witch even though this world is her creation.”

Horinouchi looked up into the sky and spoke from the seat at a table on the courtyard terrace. Kagami responded while accepting a can of soda from Mary.

“A setting is only a setting. This world was set into motion from there and my sister has intervened in the many Hexennachts since. There are sure to have been some omissions and additions to the setting, but this entire world, including you, is from several generations after what my sister ‘imagined’.”

Horinouchi trusted Kagami enough to just say “Is that so?” and take her at her word. Meanwhile, Hunter said “That’s kind of a problem in itself” from the opposite seat. She then raised both hands.

“Then is it not the Black Witch’s fault that my family seemed kind of sloppily put together?”

“Even my world had a history,” explained Mary next to Hunter. “Calculating back from that and investigating the oral traditions suggested that about 2000 years’ worth of that history ‘actually existed’. In most cases, we considered she might have intervened at the major turning points.”

Horinouchi looked down while thinking, “I see.”

“I guess we can’t just blame everything on the Black Witch.”

“Is there something you would like to dodge responsibility for, Manko?”

“Brigadier General, are you saying that aspect of Miss Horinouchi was part of the Black Witch’s setting?”

“Not a chance,” said Hunter while shaking her hands side to side.

Horinouchi simply nodded, but something caught her attention.

“Kagami, your name would be outside the Black Witch’s setting, wouldn’t it?”

“My name supposedly comes from the fact that my grandfather said, ‘Our family name already sounds like it means mirror[1], so it’s about time we actually gave someone that name, right!?’ I am the first in the family to take the name. Whenever he would tell that story, the running gag was for my mother to glare at him and correct him by saying, ‘We named her that so she would become a good role model who would be a reflection of whoever she is with.’ ”

“…Which one of them worked to turn that into a running gag?”

Horinouchi was certain of that. And she understood. After all…

“Well deduced, Horinouchi. And that is what makes Shouko so easy to understand. …And why I let my guard down.” Kagami smiled bitterly and then looked to Horinouchi as if something had just occurred to her. “Horinouchi, your mother was named Mitsuyo. She would have been given that name in the hopes that she would ‘fulfill’ things in her ‘generation’, but I bet she was more focused on the next generation herself. She saw that fulfillment as her role and so she removed the ‘generation’ from her daughter’s name to say it was already complete. Thus, you are the container that has already been filled, Manko.”

“What does that matter?” asked Kagami. “If the turning points are the Black Witch’s intervention, then continuation is a natural thing and a sign of peace. …Your connected names make you a parent and child of peace. That is what this means, Horinouchi. Or am I reflecting you incorrectly?” 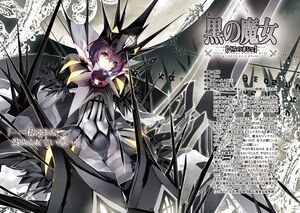 Traits: Unfortunately, almost nothing is known about the Black Witch.

In fact, most of those involved in the previous Hexennacht had their memories erased by her. But there are still some things worth writing about and her overall outline can be deduced from the people’s general impressions and individual memories.

She uses a Queen-type of Frame. She is the only one in the history of witches who has been able to use that type. It is thought that is because she was the source of witches and witches prepared their power in order to fight that queen. Also, a witch’s jinx says the same words cannot be repeated. So if there is already a queen, it would be difficult for another one to appear.

So what does that mean? It makes you wonder what kind of job would be able to oppose a queen. I guess it would have to be a revolutionary…! No, that’s too vague. Guevara! (sound effect) But I think that’s a good starting point, so to give it more thought, maybe a public prosecutor would be more modern! But that would just look like someone in a suit, so that’s no good! A judge wouldn’t work since they take forever to make a judgment and have to listen to what the other person has to say. So maybe the best job would be someone with jurisdiction, individual discretion, and the backing of god? How about that?

“I have yet to be rebuked.” 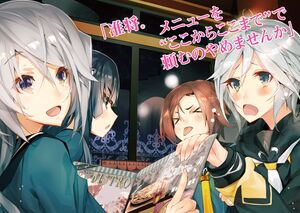 “Brigadier General, please stop placing your order by saying, ‘I want everything from here to here’.” 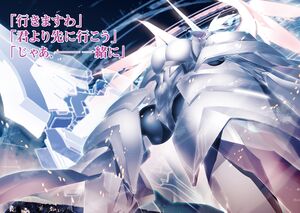 “I shall go even further than you.” 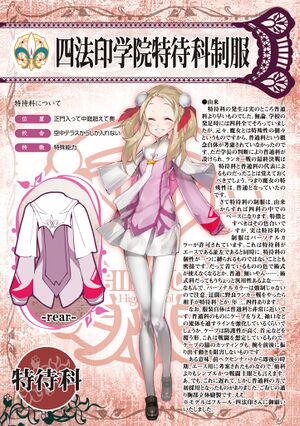 About the Honors Division

Location: Past the courtyard from the main entrance

School Building: Can only be entered through the midair terrace

Now, the uniform itself is extremely similar to the General Division one. It pretty much takes the General Division uniform, adds a cape, and reinforces the lines on the sleeves and such that allow ether to flow through. The cape has a high defensive power and it covers the neck and such. It’s designed for battle, so it’s cut around the arms so it won’t obstruct their movement.

This was the uniform considered for the aces shortly after the previous Hexennacht, so in a way it’s a lot simpler and more focused on combat than the other divisions. However, that delayed its completion and the General Division uniform was the first one adopted. As you know, chest-accentuating stitching is available. Yes.

*We asked Fleur Shihouin to model the uniform.