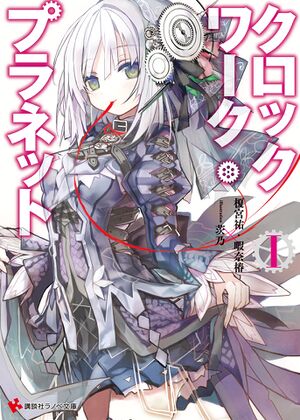 Clockwork Planet(クロックワーク・プラネット) is a light novel series by author Yuu Kamiya and Tsubaki Himana and illustrated by Shino. It has an ongoing manga adaptation illustrated by Kuro.

The series is ongoing, and currently has 4 volumes.

The Earth had died a thousand years ago. It was rebuilt using gears by a mysterious man named "Y". In the present, while Naoto Miura is living his life as a high school student and a gear enthusiast, a box crashed into his home. In the box, is an beautiful automata girl, RyuZU. This encounter would then have a profound effect on both Naoto and Society itself.

Clockwork Planet is also available in the following languages:

The Clockwork Planet series by Tsubaki Himana and Yuu Kamiya[edit]