The sound of faint vibrations stimulated his consciousness.

Haruaki opened his eyes and woke up.

First to enter his view was a silver color.

The sun had just risen. Still slightly dark, the world extending outside was colored navy-blue. She was looking out the window with her elbow resting against the window frame. Blown by a gentle breeze, that familiar color was fluttering softly. Her body was casually wrapped in a blanket.

Probably noticing he had woken, Fear slowly turned her head.

It felt so long ago since he last saw this—Her face.

Pouting lightly, she looked away from him. 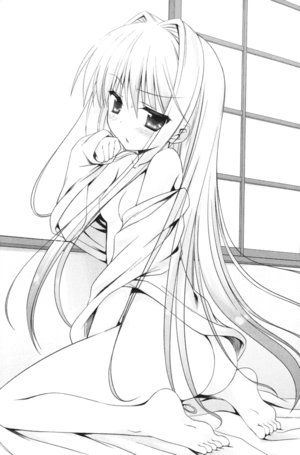 She answered ambiguously. Then as though mustering her determination—but hunching her shoulders awkwardly, with her gaze still averted—she said:

"This is because... You seem like you really wanted to see my voluptuous body. What a shameless brat. Since you said you'll feel shocked and hurt if you can't see my body, and might even commit suicide, it can't be helped. I've no idea what's going to happen in the future."

"No, I never said anything about possibly committing suicide."

At this moment, they made eye contact for the first time. Fear's face, eyebrows raised in indignance. Fear's face, the same as usual. The refreshing morning air. The color of the dawn sky outside. The shiny fluttering silver hair.

All this was making Haruaki feel an urge to laugh.

It was probably the same for Fear too.

The two of them looked at each other and chuckled.

As though sighing "good grief," Fear shook her head wryly then suddenly pointed a finger at him.

Haruaki felt his pocket. What he had been hearing since a while now was the vibrations of his cellphone set on silent. Taking it out to have a look, he saw an unfamiliar number on the screen.

He was feeling a good premonition.

He somehow felt that the caller was a certain acquaintance.

He somehow felt that on this wonderful silver morning, no other person could possibly be calling.

Hence, Haruaki did not feel afraid at all. Instead, with a "finally here" kind of mood, he gently pressed the button to pick up the call.